I own a cookbook entitled “How To Cook Everything.” That may sound like an ambitious claim, but based on the size and weight of this thing, I’m somewhat inclined to believe it.

In the back of the book, there’s an extended index of suggested menus for different occasions: New Year’s Eve dinner, hangover brunch, spring picnic, etc. One of them was called the “Impressing-Your-Boss Dinner.” As a soon-to-be-graduated senior who has never made a full, three-course adult meal and will hopefully have a boss to impress soon, I decided to try it out, with my roommates taking the role of the boss (with spouse and child).

Confession time: I don’t actually know what a plum tomato is, and when I saw the name of this recipe I thought it was calling for actual plums. However, it turns out “plum tomatoes” and “Roma tomatoes” are the same thing. This tart turned out to be my favorite part of the meal, but it does take the most prep.

The hardest part of the tart is the crust; you could probably buy a premade pie crust, but I liked the challenge of making one from scratch. Any basic pie crust recipe will do; just make sure to keep the butter cold when you mix it into the dough or you won’t get the flakiness you want. Put the crust in a dish, prick it with a fork all over, and bake it for 12 minutes at 425°. Then reduce the heat to 350° for another ten minutes.

Peel, core and slice up the tomatoes. Line a baking sheet with aluminum foil and pour the olive oil  into it, then place the tomatoes on the foil cut-side down. Crush the garlic cloves (don’t remove the peel) and scatter them onto the baking sheet. (Also, if six cloves is not enough for you, I completely understand — garlic should always be measured with the heart.) Cook the tomatoes in the oven at 275° for two hours. If you’re trying to save time, as I was, you could put it in at the same time as the crust, just for a much shorter time. In that case, check it often to make sure the tomatoes aren’t burning.

When the pie crust is cooled, spread the pesto on the bottom and top with the tomatoes (and some salt and pepper). Remove the peels from the garlic — mash it up and spread it over the tomatoes. Top with the cheese, a drizzle of olive oil and some more salt and pepper. Pop it back in the oven for 10-15 minutes.

The salad is a simple, refreshing pair to the heartier tart. The original recipe calls for gorgonzola, but any blue cheese will do. Lightly toast the walnuts and coarsely chop them. Slice up the pears into roughly cubed pieces. Crumble the cheese into small pieces, and toss all the ingredients with the mixed greens. Drizzle with a vinaigrette of your choice; maybe something fruity, or a nice balsamic.

This starting course got a pretty good reception from my “boss.” Appetite whetted, I moved on to the main course.

Well, technically the recipe calls for veal, but Kroger didn’t sell that (surprise, surprise), so a girl must adapt. Pork has the most similar taste and texture to veal and is generally cheaper, anyway. This way of preparing it is one of the simplest I’ve ever tried.

Let the pork come to room temperature and heat a pan on high. Cut the garlic clove in half and rub it over both sides of the pork, then rub on the olive oil and spices. Cook the pork in the pan for about three to five minutes each side — however long it takes to get nice browning. Don’t move it around in the pan too much or you’ll prevent it from coloring properly. The possibility of your smoke alarm going off during this process is high, but don’t be alarmed — just open up a window, turn on a fan and power through.

A roesti, if you didn’t know, is a dish of Swedish invention — a fritter patty usually made of potatoes. This version, obviously, substitutes potatoes with shredded beets. I went into this never having even had a beet before and was pleasantly surprised at the mix of sweet and salty this roesti supplied.

You’ll want to wash and peel the beets the same way you would a potato, then grate them by hand or with a food processor. Toss them with the salt and chopped rosemary. Heat a sauté pan on the stove to medium heat and cook the butter until it is browned and nutty, then press the beet mixture into a circle. Once the bottom has browned, turn the whole thing over by placing a plate over the pan and flipping it, then sliding the roesti back into the pan. Try very hard not to burn yourself and if you feel the need to wear two oven mitts while doing so, go for it. Cook until the other side has browned, creating a sort of crust on both sides.

For the rolls, proof the yeast with the sugar and warm water, then mix with the dry ingredients. Add the mixture to a food processor with butter and egg and process for 10 seconds, then add the milk and process again for 30 seconds. Let the dough rise for an hour or so, then punch it down and let it rise for another 15 minutes. Then roll the dough out, tear off two-inch pieces to shape into balls and cut a slit in the top of each roll. Bake for about 20 minutes at 375° — use an egg wash on top for a glossy top.

This was a good course overall, though my rolls tasted a bit bland — maybe the fact that I didn’t have a food processor made something go wrong. Also, I don’t know much about wine, but I hear pork can pair well with whites and reds, so that’s a definite bonus in my book.

Mousse, it turns out, is one of those things that seems intimidating but is not actually that hard to pull off. Start off by sprinkling the gelatin over the lemon juice in a saucepan. Beat together the eggs, zest and sugar, and whip the heavy cream into soft peaks. Be prepared for an arm workout if you don’t have an electric mixer. Heat up the gelatin mixture on low heat until the gelatin dissolves, then add the egg mixture and mix again; finally, stir the cream into the mixture and refrigerate until chilled, stirring occasionally.

I’d never had a citrus mousse, but I liked it just as much as any chocolate mousse, and the lemon flavor comes through strong. It’s light and refreshing, but still filling. Although the final product looked something like cottage cheese the color of scrambled eggs, I’d definitely make it again.

Overall, this meal plan took a lot of time and prep, created vast amounts of dishes and required the help of several roommates. There are some elements I’d make again, though certainly not all at once. I don’t know if this meal would impress a real boss, but it definitely satisfied a few college kids pretending to be one. 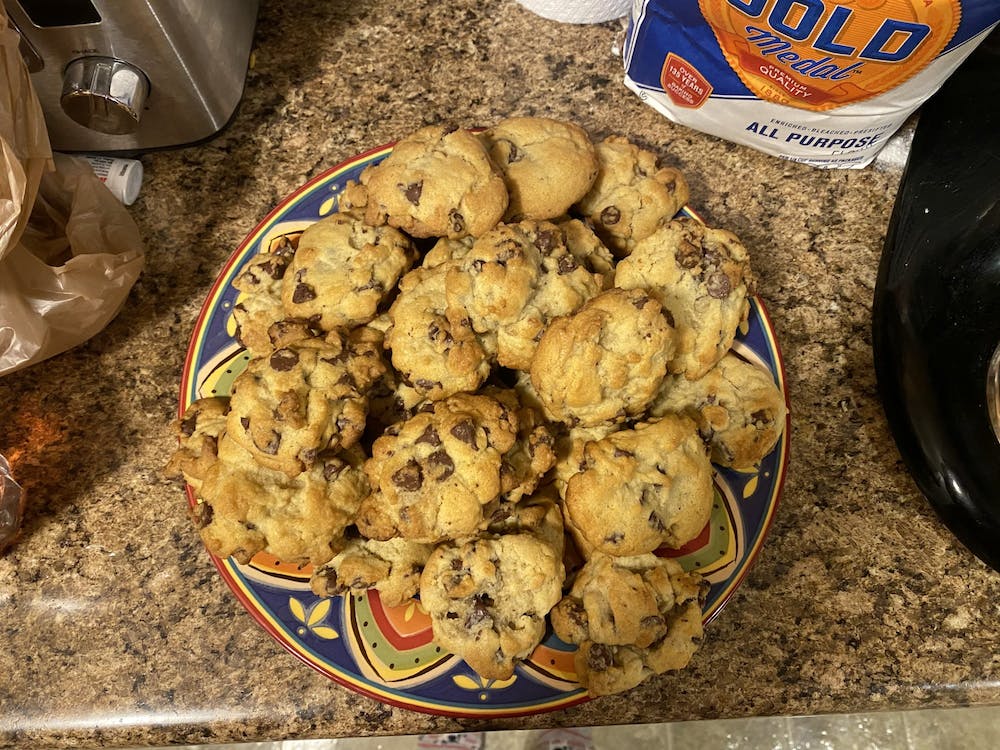 Affectionately called “chocolate chippers” by my little cousins, my mom’s cookies have been a staple in my diet for as long as I can remember. They’re perfect – puffy, impeccably textured and absolutely loaded with chocolate chips.