Bachelor Hall to undergo renovations and become a hub for humanities

Bachelor Hall will undergo a complete structural and cosmetic renovation to combine humanities classes and modernize the 43-year-old academic building.

Cody Powell, associate vice president of Facilities Planning and Operations at Miami, said the renovations plan to begin in 2024.

The renovation was unanimously approved by the Board of Trustees in February with a proposed budget of $62 million.

Bachelor Hall, which currently houses the departments of English, mathematics and speech pathology and audiology, will be transformed into a hub for humanities-based majors.

The departments of Media, Journalism and Film (MJF), philosophy, history and comparative religion will all move into Bachelor Hall after the renovation.

The Department of English, the American Culture and English (ACE) program and the Humanities Center, which are already located in Bachelor Hall, will stay put.

“Because it’s kind of a marquee building and it’s right at the heart of campus and near the new Honors College,” Provost Jason Osborne said, “we thought that collecting some of the humanities departments together would really kind of create the beacon of what Miami really is known for, which is interdisciplinary thinking, but also a solid core in the liberal arts and the humanities in particular.”

Powell said the renovations plan to begin following the completion of the Clinical Health Science and Wellness Building and the Richard McVey Data Science Building. Both are currently under construction.

The department of speech pathology and audiology will move to the new Clinical Health Science and Wellness Building, but no location has been determined yet for the department of mathematics.

In addition to the combination of departments, Bachelor will also undergo structural updates, including a new roof and modernized interior spaces.

“We’re anticipating right now that the work will constitute all the main infrastructure of the building like HVAC and lighting and so forth, but also all of the interior spaces will be gutted, reconfigured, and updated,” Powell said. ”And then we’re going to be doing a lot to update and right-size the teaching spaces, the size of the classrooms and the functionality of the classrooms that are in there today.”

The building will also undergo cosmetic changes that give students a space to work together.

“We’re enclosing the existing courtyard and making it a large atrium space, likely two levels, which will be a nice addition because there’s just not that much community or collaborative space in the building today,” Powell said.

Osborne hopes combining all the humanities-based disciplines will invite students and professors to work collaboratively.

“The faculty will benefit from being around peers with similar interests, and I anticipate some great things coming out of that, and for students, having faculty who are engaging with each other and doing interesting things is important,” Osborne said.

Osborne explained that the renovation concepts are a product of shared governance in which students, faculty and staff come together to create a modern vision.

Madelyn Detloff, chair of the English department, said all the chairs of the affected departments have met multiple times to give their input on the changes.

Alyson McVan, a junior English creative writing and media and culture double major, disagrees with Detloff and feels that combining the humanities will only limit their involvement on campus rather than enhance it.

“I feel like sometimes humanities get the short end of the stick at a lot of universities, and I feel like that is what is happening here cramming them all together in one building,” McVan said. “We already feel kind of looked over, and decreasing the number of buildings we have will worsen that feeling.”

As a media and culture major, one of McVan’s reservations is the fate of Williams Hall, which houses the department of MJF. In addition to traditional classrooms, Williams Hall contains a film editing lab, individual film-editing and audio-editing studios, a full broadcast studio and radio production studio.

Although the future of Williams Hall is still undecided, Powell assured that the university will not be changing the MJF departmental program or offerings as a result of its relocation.

He said the equipment and systems may be different than those in Williams, but no decisions have been made yet. He also said that it doesn’t make sense for the university to renovate it due to the age and poor construction of the building.

Powell agreed that sometimes the humanities are overlooked, but he said investing in the renovations of Bachelor Hall and combining the humanities-focused majors into one building proves Miami’s dedication to the importance of humanities.

“We’ve had a pretty strong focus on STEM facilities, which are obviously very important to us here at Miami, but this is an important project for the humanities which is a big part of the liberal education that we provide here at Miami,” Powell said. “I think it’s important that we invest in those facilities and make sure that we’ve got spaces that are conducive to providing that instruction and learning.”

McVan agreed that Bachelor Hall is in need of an update but said it isn’t too bad.

“I think it could be updated, but I personally don’t think it’s in any sort of state of disrepair,” McVan said. “It’s definitely old, but it’s not necessarily older or in worse shape than any of the other buildings on campus.”

Anna Eichelberger, a speech pathology and audiology major, disagreed with McVan, and thinks the building needs a refresh.

Eichelberger’s classes will be moved to the new Clinical Health Science and Wellness Building, but she fully supports the renovations of Bachelor Hall.

“The building is old,” Eichelberger said. “I know there are some leaky ceilings and other things that come with an older building, and that comes with going to a school that is as old as Miami is. I don’t think there is an issue with it, I just think that it needs to be updated to better accommodate people.” 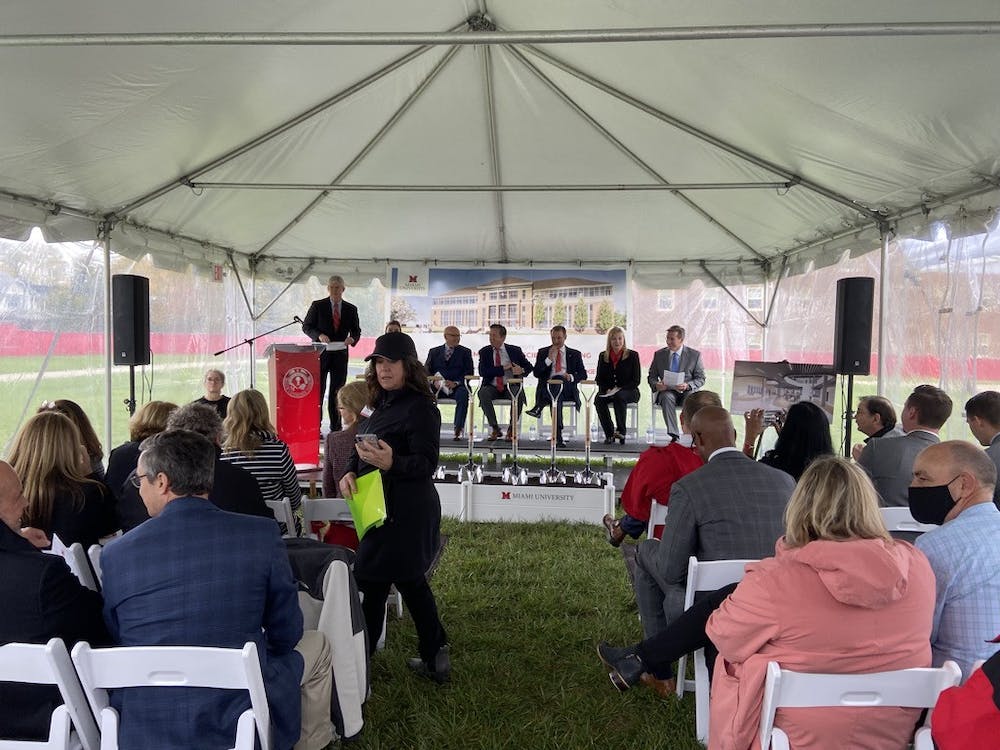 Miami University held a groundbreaking ceremony on Monday, Oct. 25, for the incoming Richard M. McVey data science building. The ceremony, originally scheduled for Sept. 22 but postponed due to inclement weather, was held to celebrate the ongoing construction of the McVey building.