No. 3 Denver cruised to a 5-2 win on Friday and finished the sweep by winning 5-1 on Saturday.

“This year’s plan did not get executed great … I take full responsibility,” Head Coach Chris Bergeron said. “But I think the last six or seven weeks we’ve shown some really good fight. We've shown some signs of really taking a step.”

Bergeron is right. Since a humiliating series at St. Cloud in late January, where the RedHawks got outscored 19-1 over the weekend, they’ve looked like a different team. The weekend after that, Miami hosted Denver and almost beat them twice. Then they swept Omaha. Then they kept it close against Colorado College, and two top ten opponents in Duluth (they even beat the Bulldogs once), and Western Michigan.

One big surprise from this season was Ludvig Persson’s statistical regression. After an excellent freshman season that earned him NCHC preseason goaltender of the year honors for this year, the Swede saw his save percentage fall below .900. But according to Bergeron, the numbers don’t tell the full story.

It's the seventh straight season that Miami has failed to win a playoff series. They’ve only won one playoff game in that span.

“This senior class has been through a lot.” Bergeron said. “We’ve talked about this a bunch … I don’t think Miami turned out to be what they signed up for four years ago, but we’re proud of them and they’re part of this family forever.”

Looking forward: it’s not going to be easy for Miami to dig itself out of the basement of the NCHC. College hockey’s best conference is not kind to rebuilding teams. But in Bergeron’s fourth year at the helm of the ‘Hawks, they’re certainly going to try.

“We’re going to add probably ten first-year guys to our program next year,'' Bergeron said. “That means the internal competition is going to get harder.”

There are pieces worth building on in Oxford.

First-year forward Red Savage will look to become a bona-fide star next year. Red and his brother Ryan, plus current sophomores PJ Fletcher and Matt Barbolini look like players that could form a formidable first line in the future. Miami also returns a lot of depth up front, like big wingers Joey Cassetti and Chase Pletzke, and Thomas Daskas, a slick skating two-way center. Persson will return to the net, and Miami knows he can be counted on.

Miami’s biggest hole for the upcoming season is probably on defense. The team will have to replace its captain and leading point-getter Derek Daschke, who at times seemed to play 45 minutes a night. They also lose Andrew Sinard and Bray Crowder, a pair of 6-6 shutdown defensemen. Two of the remaining seven rostered defensemen, Nick Donato and Alex Murray played very limited roles this season. Expect Bergeron to be busy on the transfer wire this summer.

Hockey to play No. 3 Denver in NCHC playoffs

The best part of the National Collegiate Hockey Conference (at least for the teams toward the bottom of the standings) is that everyone dances. That’s good news for the Miami RedHawks (7-25-2, 4-19-1 NCHC), who finished last out of eight teams in the conference. The bad news is the team has to play the No. 3 Denver Pioneers (25-8-1, 18-6 NCHC) this weekend in the NCHC Frozen Faceoff. 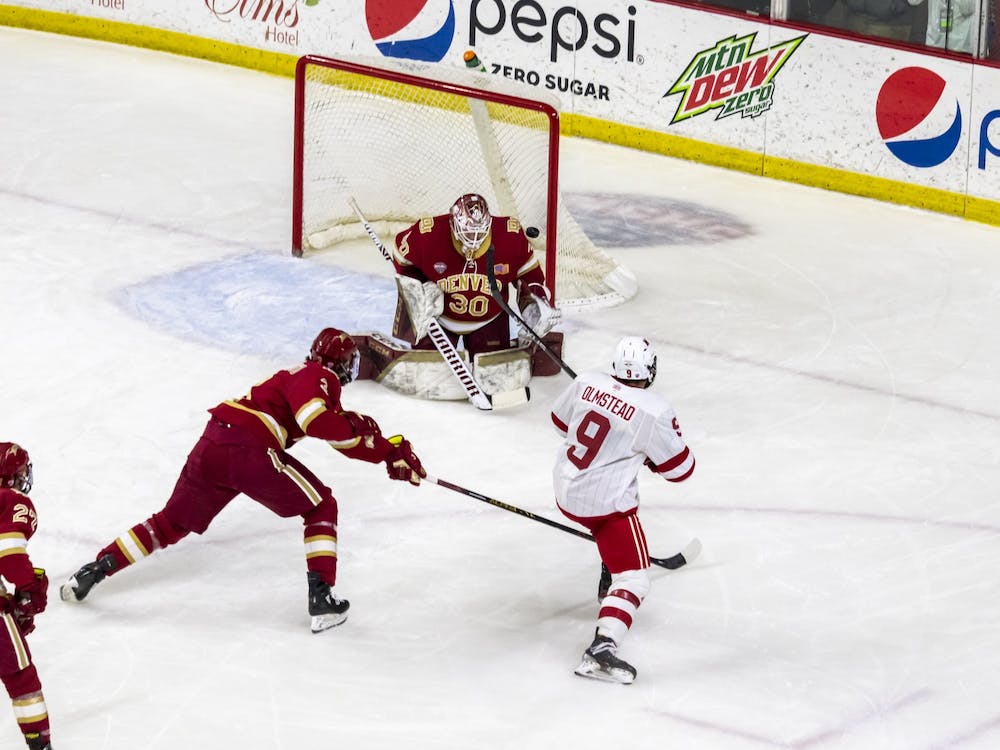 Miami will play its final home games of the 2021-22 season against No. 8 Minnesota Duluth this weekend. The team comes into the series on a pretty good stretch. They’re only 2-4 in their last six games, but the four losses came in close games to nationally ranked teams. In every game of the last six, the RedHawks have kept it competitive until the final buzzer.