At 7:15 on a Tuesday morning, most Miami University students are still sound asleep in their beds.

But inside Cady Arena’s practice rink, Miami’s senior synchronized skating team is already on the ice, literally practicing  skating circles around their competition.

As Ricky Martin’s “Livin la Vida Loca” blares from the speakers, team members skate around the rink to warm up for their first practice of the day.

They’ll have another practice today, as they do every weekday; one on the ice, one off, either a dance rehearsal, lifting weights or cardio. Sometimes, they even practice on Saturdays

Water bottles and skate guards line the rink, and almost every skater can be seen wearing a Team USA jacket as they gear up to represent their country at the World Synchronized Skating Championships in Ontario, Canada on April 8-9.

As the team begins to rehearse their short program, a performance set to a cover of “House of the Rising Sun,” head coach Carla DeGirolamo watches as sixteen sets of skates glide, twirl, jump and even cartwheel across the ice. DeGirolamo skated on the synchronized skating team herself when she attended Miami from 1999-2002.

When she sees a problem, she skates out to the team, gives them advice and they begin again. DeGirolamo said that she and her skaters make it a point to foster a positive environment on the team, even when things may be frustrating.

After the short program, the team moves on to the long program, set to “Catch Us If You Can” by Elle King and complete with complex choreography and lifts.

Two of these skaters, senior Sarah Noonan and junior Brittney Rivelli, have been looking forward to these moments for most of their lives.

Rivelli and Noonan have skated together since the ages 6 and 7, respectively, and they even participated in a competition at Miami in 2010. After both accomplishing their goals of attending Miami and making the synchronized skating team, they’ve set their sights on an international performance.

“It has been a lifelong dream for so many of us on this team,” Noonan said. “So it's personally just already so fun and I cannot wait to represent the USA in North America, because so many of our fans and family will be there.”

Like DeGirolamo, Rivelli contributed much of the team’s success to the encouraging atmosphere the team has created this season. They know that if they enjoy their environment, they’ll perform better, and it has become one of their goals as they head to the World Championships.

“With that positive environment, it helps us really challenge ourselves and take extra steps to be better,” Rivelli said. “The training has definitely picked up this year, which you can see in our success, but having such a positive environment makes that all the more easier.The positive environment isn’t just reserved for the ice, though, with both Noonan and Rivelli pointing out that they can feel support coming from all over campus. Rivelli even received emails from multiple professors voicing their support.

“[Skating] has given us an identity on campus, but we also are encouraged to build our own identities and develop as students and humans,” Noonan said. “But it is definitely cool, because people on campus appreciate skating.”

Above: The senior synchronized skating team practices a set at Goggin Center

For DeGirolamo, the most exciting part of heading to the World Championships is the opportunity to see her skaters achieve something that they’ve worked so hard for — some for practically their entire lives.

“To see these athletes achieve something that they've been working towards, most of them their entire skating career, is so rewarding as a coach,” DeGirolamo said. “We do what we can for them and try to give them the best chance for success. And when everything works the way that you plan and hope for, it’s really a great thing.”

But whether or not they take home the gold in April, the skaters know that what they do is about much more than a medal.

“They always say that a team is like a family, but I think this team truly is my family,” Rivello said. 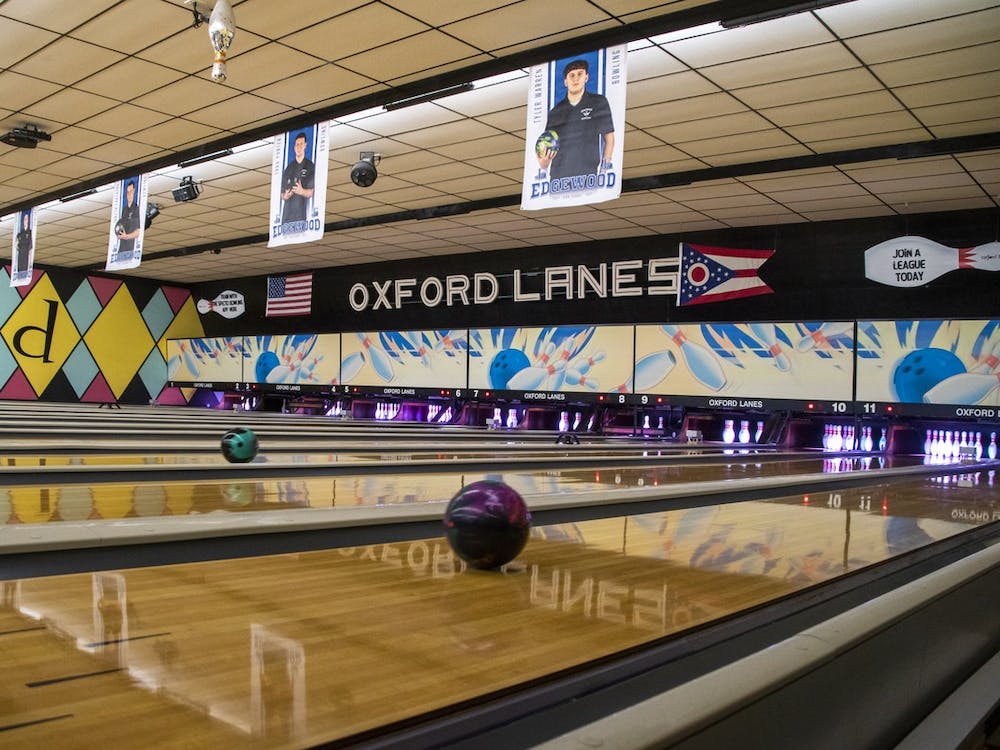 Oxford Lanes is the only bowling alley in Oxford, located at 4340 Oxford Reily Rd. It offers bowling lanes, food and a bar.