Miami breaks losing streak in style against No. 18 Omaha

For only the second time this year, and the first time in more than three months, the Miami University RedHawks won a National Collegiate Hockey Conference (NCHC) game.

Miami bested No. 18 Omaha in a back-and-forth thriller at Goggin Ice Center on Friday night.

At the end of the first period, the teams were tied 1-1. To start the second period, Omaha scored twice, once on the powerplay.

With Miami down 3-1, the Mavericks took two quick penalties. The RedHawks capitalized big time on the 5-on-3. First, junior forward Ryan Savage scored from the high slot. Then, less than a minute later, junior forward Joey Cassetti fired one home as the second penalty was expiring.

Omaha scored another power play goal 7:19 into the third. Then, senior defenseman Derek Daschke scored on the powerplay (there were a combined 20 penalties throughout the night) to tie the game.

Sophomore defenseman Hampus Rydqvist scored his third power play goal in as many games to put the RedHawks on top with about five minutes remaining.

Miami almost didn’t pull it out. Early in the third period, Casetti got a major penalty for kneeing. The Mavs hit the post three times during their ensuing five-minute power play, but the ‘Hawks held them off the board.

Omaha had a massive push in the last two minutes with its goalie pulled, but sophomore goalie Ludvig Persson was a wall.

Miami has blown third period leads in seven games this season. Everyone in the building who’s paid attention to the ’Hawks this year was on pins and needles until the final buzzer, and maybe even a little bit after.

Persson saved 33 of Omaha’s 37 shots and made some acrobatic saves when it mattered. Even more impressive is that he stood strong enough to drag a win out of a game where Miami spent 19 minutes short-handed.

Miami’s offense was as locked in as it’s been all year. Senior forward Chase Gresock finished with a team-leading nine shots and drew two crucial penalties in the third period. Sophomore forward PJ Fletcher was a puck-carrying juggernaut, and first-year forward Red Savage won 16 of the 26 faceoffs he took and continued his hot streak with an assist and seven shots on net.

Rydqvist finished with a goal and two assists. The sophomore has looked like an impact offensive defenseman of late.

Omaha’s Brandon Scanlin got tossed from the game in the second period after he sent Red Savage flying headfirst into the boards with an objectively scummy hit.

To make the win even sweeter: it seriously damages Omaha’s chances at an at-large bid into the NCAA tournament. If the Mavs want to dance, they’re going to have to win the conference.

Some free advice from the sports section: if you can make Saturday’s game, be there. These teams hate each other. Miami’s riding the high of a rare win, and Omaha can’t afford to lose again. It’s going to be fun to watch. 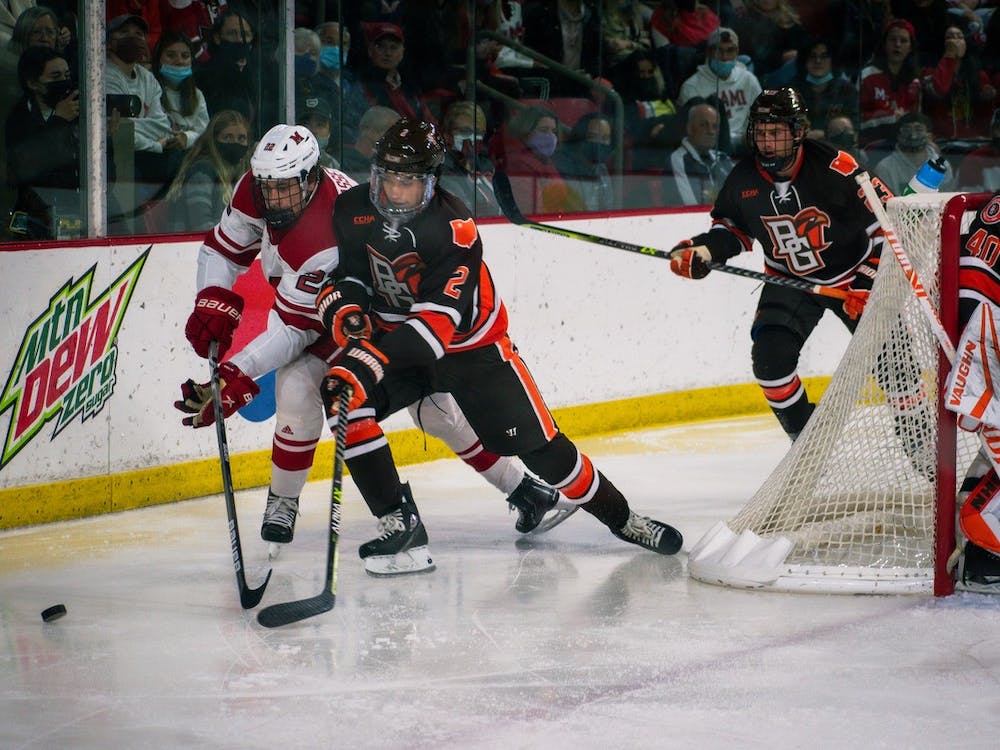 Success on the ice has been inconsistent and fleeting for the Miami RedHawks this season. The team is 1-12-1 in National Collegiate Hockey Conference (NCHC) play, and careening toward a sixth consecutive bottom two NCHC finish.