Miami announces the winners of the President’s Distinguished Service Award

Miami University held its yearly ceremony for the winners of the President’s Distinguished Service Award on April 11, after announcing the winners on March 30.

The ceremony was held in Wilks Theater and recipients and speakers attended in person with video performances from groups on campus, like the Men’s Glee Club. It was also live streamed on the Student Life Facebook page, so participant’s friends and family could watch.

This year, there were over 50 nominations for the award and 19 awardees.

Faculty and staff across Miami’s three campuses received an email from the president’s office asking them to submit a student nomination for the award. The nomination phase then closed in mid-February.

Mark Pontious, director of family and parent services, said the President’s Distinguished Service Award is the only one of the three awards that requires a selection process.

This selection process asks faculty and staff who nominated someone to turn in a letter of nomination along with their nomination choice. Pontious said most students are nominated more than once by other staff members.

“These are students who have impacted multiple places on campus,” Pontious said.

After being nominated, students are informed of their status and asked to submit a resume, which gives a broader picture of what the students have accomplished on campus.

A committee of faculty and staff across all campuses then review the nominations and select the winners of the awards. The committee makes their selections between mid-February and mid-March after reading all of the resumes and nomination letters.

“They are extremely hard decisions to make, knowing that these are all amazing students,” Pontious said.

Keresa Murray, a senior education studies major, won an award for her dedication to being a Resident Assistant (RA) on campus. Murray has been an RA at Miami for three years and serves on the marketing and video production committee for the Office of Residence Life.

Murray said winning the award is a bittersweet feeling, as it means her years at Miami are coming to an end.

“It kind of just makes everything real with senior year, it’s all just wrapping up now,” Murray said.

CJ Lynch, a senior kinesiology major with a co-major in pre-medical studies, won after being nominated for  his work in the Office of Admissions, where he serves in several different positions, such as the Bridges Program host and the Diversity Dialogue facilitator.

“I was extremely grateful to be recognized in this way,” Lynch said. “It felt surreal in many ways.”

Marketing and English professional writing double major Molly McNamara won for her dedication as president of the Panhellenic Association and for her focus and commitment to the sororities during the COVID-19 pandemic, as they moved online.

“I always enjoyed the work I did,” McNamara said. “I never did it for recognition, so when I did win it was a shock and a great honor.”

For doing work for PFLAG’s Oxford chapter, which is a national organization that unites families, allies, and members of the LGBTQ+ community and other organizations, Priyana Kalita, a sport leadership and management and women's, gender & sexuality studies double major, was nominated by three different staff members.

“I come from a very remote part in India, so getting something like this is a big thing for me and my family, it was very happy news,” Kalita said.

Kalita said they were glad their parents could watch the ceremony from India. 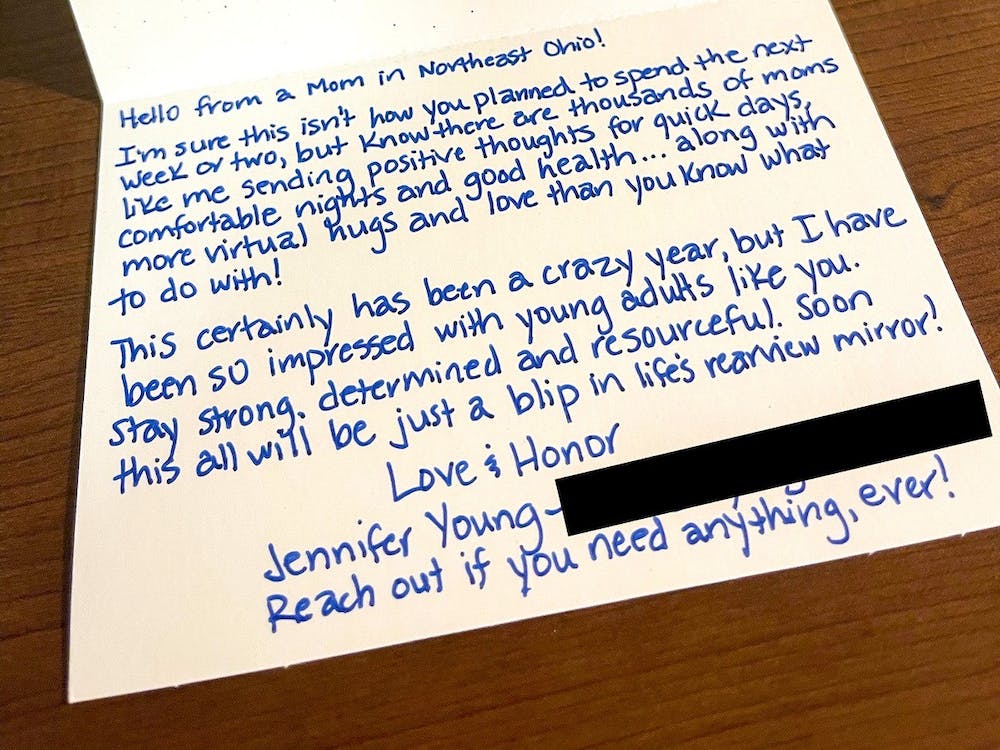 Upon arrival to the quarantine or isolation residence hall, students are met with, among many things, a care package. The bag includes snacks, art materials, a mug, a blanket and a personal touch — a handwritten note from a Miami family member.