Friday’s doubleheader started out with an extra innings loss.

The RedHawks were down 2-0 going into the bottom of the sixth. Kent State left fielder Ben Carew dropped a squeeze bunt down the first base line in the first, then hit a solo home run in the sixth.

To start the bottom of the sixth, sophomore third baseman Brian Zapp singled up the middle. Senior catcher Nate Stolze and senior left fielder Nick Neibauer followed up with walks. Then, graduate student second baseman Will Vogelgesang socked a single through the right side of the infield to score two.

The game remained scoreless until the top of the eighth inning, when Kent State designated hitter (DH) tripled off the centerfield wall to lead off the inning. Center fielder Colin Matthews followed up with a groundout to Vogelgesang at second base that scored the run. The ’Hawks were shut down in the bottom of the eighth, and Kent State took game one.

The second game of the doubleheader was a pitchers duel that Miami won 1-0.

The only run of the game came in the bottom of the fifth inning. Miami’s senior left fielder Parker Massman doubled to start the inning. Then, Zapp pushed a sacrifice bunt to the pitcher, advancing Massman to third. Sophomore infielder Billy Kopicki came through in the clutch, blooping a single behind second base that scored Massman.

Star junior pitcher Sam Bachman started on the mound for Miami Saturday, but the ’Hawks fell 4-1.

In the second inning, Kent State outfielder Justin Kirby singled. He promptly stole second, then scored a batter later after a throwing error by Bachman.

An inning later, the Golden Flashes scored two more. Outfielder Colin Mathews bunted for a single, and Carew was hit by a pitch. Next, Outfielder Cam Touchette bunted the runners over. The runners were scored by two straight groundouts from catcher Justin Miknis and second baseman Kevin Dobos.

In the fifth, the Flashes scored their final run of the game. Third baseman Kyle Jackson bunted for a single, then stole second and third. Senior catcher Nate Stolze threw to third trying to get Jackson, but the ball ended up in left field. Jackson came around for the second unearned run of the day.

Miami grabbed one back in the seventh inning. Kopicki doubled to left and moved to third on a groundout from Stolze. Then, senior first baseman Michael Morrissette grounded to first and drove in Kopicki to make the score 4-1.

Bachman was electric as usual, despite the score. He pitched seven innings, only threw 77 pitches, and struck out 11 while only giving up three hits. Graduate student left-handed pitcher Kevin Napoleon finished the game with two scoreless innings.

Despite taking an early lead, the RedHawks lost again Sunday, 6-3.

In the third, Vogelgesang reached on a fielder's choice and stole second. Then, redshirt-freshman Nate Stone poked a single to right field and scored Vogelgesang. An inning later, Zapp blasted a home run to left-center to stretch Miami’s lead to two.

Kent State struck back in the sixth when Dobos slapped a single to left, scoring Miknis, and took the lead in the seventh. Shortstop Michael McNamara walked and advanced  to second on a sacrifice bunt. He moved over to third when designated hitter (DH) Sam Thompson hit an infield single. Matthews drove in McNamara a few pitches later with a sacrifice fly to tie the game. Then, Carew doubled to left, driving in Thompson.

The RedHawks would never regain the lead. Kent State scored three more runs in the top of the ninth, and the RedHawks scored once more in the bottom of that frame, after senior outfielder Parker Massman tripled and was driven in by a single from the bat of junior infielder Stephen Krause.

Miami drops to a tie for third in the Mid-American Conference (MAC) with the series loss. The ’Hawks are four games behind Central Michigan and 3.5 back of Ball State.

Next weekend the RedHawks play a four game series at Central Michigan University. The teams play at 3 p.m. Friday, 1 p.m. and 4.30 p.m. Saturday, and 1 p.m. Sunday. 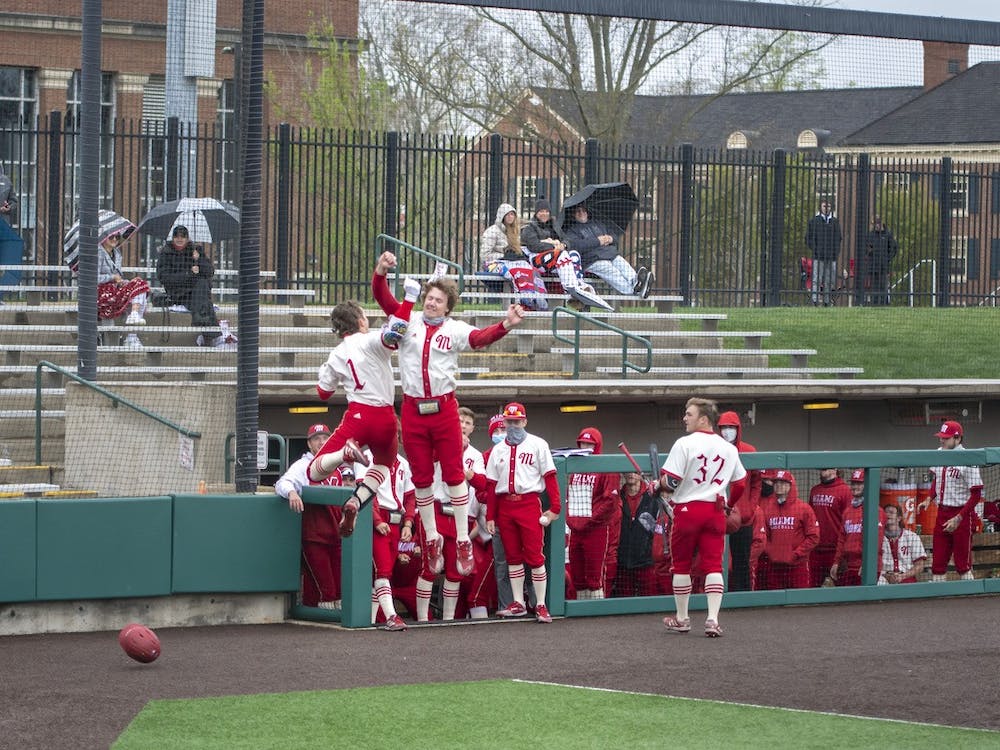