Hockey to play No. 1 North Dakota in conference quarterfinals

The RedHawks finished the regular season 5-17-2, landing them eighth (of eight) in the final NCHC standings.

Miami plays the University of North Dakota, Friday, March 13, at 7:37 p.m. in the NCHC quarterfinals.

The RedHawks have a tough task ahead.

North Dakota is currently ranked No. 1 in both the NCHC and the country, and rosters 12 National Hockey League (NHL) draft picks. The Fighting Hawks finished the regular season 18-5-1 and beat the RedHawks twice this season, 2-0 and 6-2.

North Dakota’s explosive offense is driven by the NCHC’s leading scorer, sophomore forward Shane Pinto. Pinto, an Ottawa Senators second-round pick in 2019, has 15 goals and 13 assists in 23 games this year.

Senior forwards Jordan Kawaguchi and Collin Adams were also dangerous in the regular season. Kawaguchi contributed 27 points in 23 games, and Adams — an Islanders prospect — put up 24 points in 24 games.

UND is strong on the back end. Their defense — that ranked sixth in the nation, giving up just two goals per game — is led by junior goaltender Adam Scheel. The Lakewood, Ohio native finished the season 16-3-1 with a 1.80 goals against average (GAA) and a 92.9% save percentage.

Beyond that, Miami will have to worry about two former first round picks. Jake Sanderson was last year’s fifth overall pick, and Jacob Bernard-Docker went 26th overall in 2018. Both players were drafted to the Ottawa Senators.

For the RedHawks to have a chance to advance, they will have to lean on freshman goalie Ludvig Persson. Persson, arguably the team’s best player this year, finished the season with a 2.40 GAA and a 93% save percentage, and is a nominee for the Hobey Baker, the yearly award given to the best player in division I hockey.

If they win Friday, the RedHawks advance to the tournament semifinals March 15 at 3:06 p.m. or 8:06 p.m. The conference championship will be played March 16 at 7:37 p.m. Semifinal games and the championship are nationally televised on CBS Sports Network. 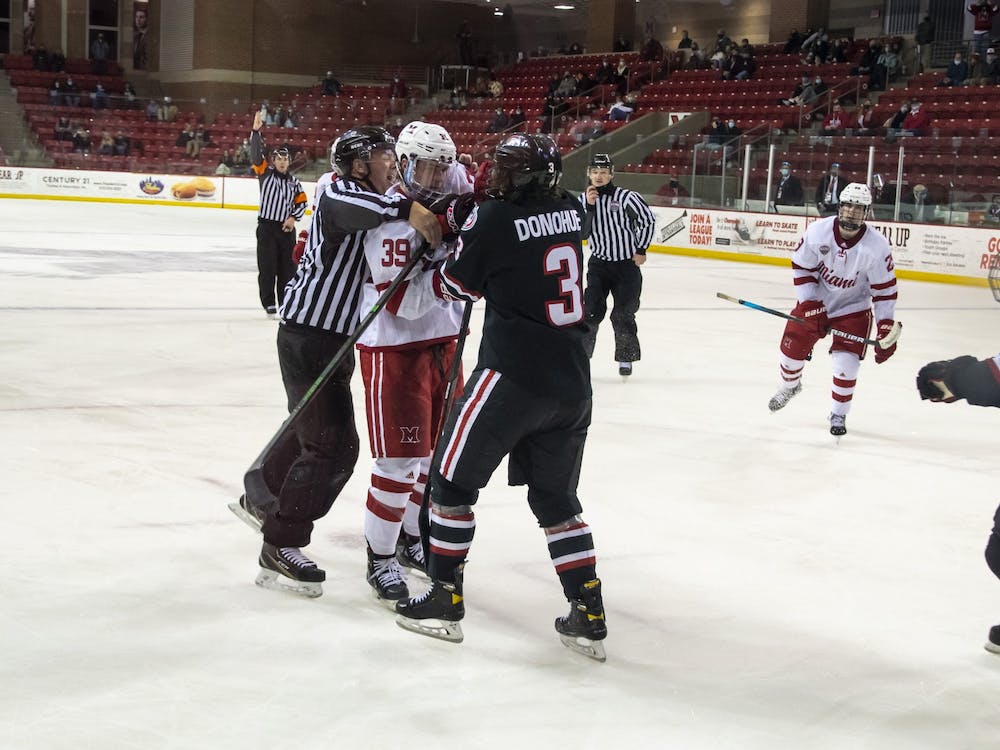