After the game, head coach Chuck Martin emphasized the importance of bouncing back after such a demoralizing loss.

“The biggest thing for me is, whenever things don’t go your way — and today they really didn’t go our way — how do you react?” Martin said.

At halftime, the game was close; Miami was only down by seven. Four unanswered touchdowns for the Bulls in the second half put the game away.

After an impressive performance against Ball State last week, redshirt sophomore quarterback AJ Mayer completed only seven passes out of 25 attempts, throwing for one touchdown and one interception.

It was an impressive showing from Buffalo’s junior quarterback Kyle Vantrease, who threw for 353 yards and four touchdowns on 17-27 passing.

The Bulls also got major contributions from both members of its two-headed rushing attack—juniors Kevin Marks, Jr. and Jaret Patterson—who combined for nearly 200 yards on the ground and 2 touchdowns.

“We weren’t physical enough in the run game. We didn’t fit the runs up,” Martin said.

The RedHawks were plagued by dropped passes all night.

The first costly drop came on the team’s first drive of the game. Sophomore receiver James Burns beat Buffalo’s coverage and had open field in front of him, but dropped a perfect pass from Mayer.

After a punt from freshman Dom Dzioban, Buffalo drove down the field with a 13-play drive that ate up 5 minutes and 35 seconds of game time.

The Bulls converted one fourth down and almost made another when senior linebacker Ryan Mcwood made a neat play on fourth and one, filling the hole and stopping Patterson for no gain.

After the teams exchanged punts on the next two possessions, redshirt freshman kicker Henry Beckett missed a 42-yard field goal after an eight- play drive by the RedHawks.

At one point using eight straight running plays, including a 30 yard rush from Marks Jr., the Bulls took the ball 74 yards and finally punched it in with a hand-off to Patterson.

Buffalo scored a long touchdown on its next drive after a Mayer interception. Vantrease threw a 78-yard touchdown to redshirt freshman receiver Trevor Wilson, who took advantage of a botched rotation by Miami’s secondary.

On the first drive of the second half, Miami's defense was unable to stop Buffalo’s stout running attack. The duo of Marks Jr. and Patterson rushed for a combined 40 yards on a nine-play drive that finished with Patterson rushing up the middle for a one-yard touchdown.

The Redhawks went three-and-out on its next drive after a big drop on first down by sophomore receiver Austin Robinson on a 29 yard pass from Mayer.

The Bulls, once again, capitalized on Miami’s mistake and scored on a 25-yard touchdown pass to make the score 28-7.

After Dzioban’s 59-yard punt was downed at Buffalo’s 16-yard line, the Bulls once again turned to the air. Senior wide receiver Antonio Nunn beat both RedHawk safeties and Vantrese completed the pass for an 82 yard touchdown to make the score 42-7.

Miami was able to score its first points of the second half on the next drive. On seven rushing plays, the RedHawks were able to get as far as the Buffalo seven-yard line. The drive stalled after an incompletion from Mayer, and Beckett pinned the 24 yard field goal to make the final score 42-10.

The RedHawks return to Oxford this Tuesday, Nov. 17, to host MAC East division rival Ohio University at 8pm. The game will be televised on ESPN and broadcast on Miami Radio Network. 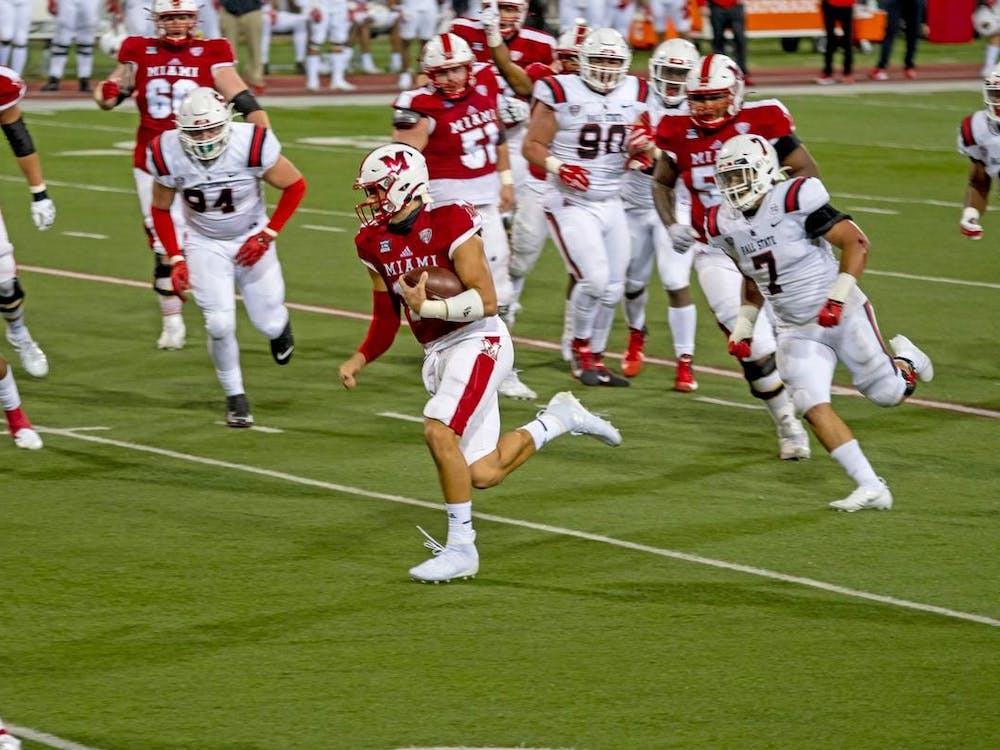 A ridiculous interception by redshirt senior linebacker Ryan McWood set the RedHawks up with first and goal with mere seconds left on the clock, and redshirt senior running back Zach Kahn punched it in for the game-winning score, finalizing a 38-31 Miami victory over Ball State in Week 1.  Now, the RedHawks look to improve their record to 2-0 against the Buffalo Bulls in what looks like a tricky matchup for the RedHawks.