The second floor of the Best Western Sycamore Inn, located at the edge of Oxford’s Mile Square, is shuttered. Fridges, microwaves and air conditioning units have been unplugged. Subscriptions to newspapers normally found outside of guests’ doorways have been canceled. The hallways are dark.

A once-bustling breakfast bar has been reduced to a grab n’ go station, where guests, if there are any, can find a bottle of water or muffin instead of a continental meal.

At the front desk, a folder full of cancellations continues to pile up.

Butterfield’s drastic cost-cutting measures are just the start of what many in the hospitality and service industries across the globe are doing, in order to survive in a pandemic world: full of social distancing measures, stay-at-home orders and nationwide quarantines amid the outbreak of the novel coronavirus.

But in Oxford, local owners and managers struggle to keep their businesses afloat while city officials scramble to pass a stimulus grant proposal into law. The college town, which depends on revenue from the Miami University student body — most of whom have left campus, hopes to avoid the worst of the virus’ economic consequences.

But at this point, it’s unclear if it will.

The Best Western Sycamore Inn used to have 24 employees working there.

Days after Miami announced classes would remain online for the rest of the semester and students were asked to leave campus, Butterfield was forced to lay off 18 members of her staff.

“It’s heartbreaking,” she said. “How do you tell an employee that’s been with you for years … I don’t need a housekeeper?”

At first, Butterfield thought maybe the virus — and the precautions taken against its spread — wouldn’t restrict Oxford’s economy.

But then, one-by-one, guests who had booked the hotel through the weekend of March 12-14, for a swim meet and one of the university’s scheduled Make-It-Miami events for prospective students, called to cancel their reservations.

“You’re looking at losing over $43,000 in less than three minutes,” Butterfield explained.

Then she got a call from the hotel’s management company.

A year ago, the unemployment rate in the Cincinnati metropolitan area was at 2.9 percent — the lowest it reached in the past ten years, according to data from the U.S. Bureau of Labor Statistics.

Now, Butterfield’s former staff are a part of an increasing number of Ohioans who are forced to file for unemployment and wait on a check from the government. But unemployment call takers at the Ohio Department of Job and Family Services are overwhelmed — dealing with at least 468,414 jobless claims as of April 1, according to The Columbus Dispatch.

Butterfield hopes she can hire back her employees when business is back to normal, she said. But no one knows when that will be.

Across town, on High Street, chairs are stacked on tables and pushed against the wall of Skipper’s Pub.

There are two or three chairs in the dining area, designated as a station for customers to pick up their to-go orders.

“We have yet to be overwhelmed, by any means of the word,” co-owner Andy Amarantos said.

Amarantos and his brother, Terry, have only two people at a time working in the 35-year-old Uptown establishment right now, cleaning and fielding takeout orders.

Skipper’s, he explained, is 95 percent employed by Miami students who work part time — most of whom have already left campus and returned home. He lets a couple of upperclassmen, who live off-campus and are still in town, come into work for an hour if they want. But business is slow.

In order to try to recoup losses, Amarantos said Skipper’s has designed a website to sell apparel and gift cards.. He and his brother are also looking into the recently signed, nationwide stimulus package to see what aid Skipper’s and their other businesses might qualify for.

“It’s all about survival.”

Last week, Oxford’s Community Improvement Corporation Board (CIC), a non-profit organization composed of representatives from Miami and the city, finalized a stimulus program for the city’s local businesses.

The plan requires Oxford make a $200,000 donation to the CIC. The money comes from Oxford’s general fund, made up of taxpayer dollars, which will then be used to buy gift cards from brick and mortar businesses who apply for the program and are accepted, Assistant City Manager Jessica Greene explained.

The city will hold onto the gift cards until at least Aug. 1, before they start reselling them to the community through an e-commerce website.

“It’s truly uncharted territory,” Greene said. “We’re trying to be adaptable, responsible and creative to keep our businesses afloat, especially with all of the students gone.”

She said preferences will be given to applications submitted by locally-owned businesses, and the funds from gift-card sales should be used to pay employees who have been laid off or financially impacted by the virus.

Businesses who apply must be traditional retailers — meaning this program doesn’t apply to vendors at the Farmer’s Market — and have less than 50 employees on their payroll, Greene added.

The CIC will recommend City Council pass its program during Council’s meeting at 7:30 p.m. on Tuesday, April 7, but the gift cards are just one step in Oxford officials’ plan to get the local economy back on its feet.

Greene explained the board will also urge the city to amend its rules on applying for a revolving loan fund, normally used to help local start-ups or create jobs for low-to-moderate income individuals. The CIC wants to give Oxford businesses the chance to apply for the loan to help with staff retention, and those who receive one will have a six-month period, beginning once they receive the loan, to pay it back with a zero-percent interest rate.

Normally, council would listen to the CIC read through both proposals twice before they pass the ordinance into a law, which would then take an additional 30 days to take effect. But, because the program is part of an emergency ordinance, both readings will be held Tuesday. If council passes the plan, it will immediately become law.

Still it’s not clear if every manager or owner in Oxford will take advantage of the city’s efforts.

The owner of Spring Street Treats said he may opt out of applying for the city’s gift card program or revolving loan fund.

“I say there’s a 30 percent chance I’d pursue any local or federal programs/loans,” said Allan Ansorg, who opened the ice cream shop on Spring Street eight years ago. “I’ll probably leave the money for those that really need it.”

But those who do really need it may not qualify for Oxford’s proposed programs.

While general managers like Kathy Butterfield can apply for the program, Greene said, the CIC is prioritizing locally-owned businesses — not major chains, like the Best Western Sycamore Inn — and it will be a very competitive process.

Back on Sycamore Street, Butterfield spends her days poring over occupancy numbers.

She hasn’t worked out the numbers to determine how much the Best Western Sycamore Inn has lost in total yet, but in 29 years, Butterfield has never had zero departures, arrivals or guests staying at the hotel until the virus hit.

Still, she tries to find slivers of happiness.

Two weeks ago, she had a guest at the Sycamore Inn waiting for surgery and spent quiet moments in the lobby chatting with him, trying to make him as comfortable and happy as she could.

“They’re in your hotel, and they have no other place to go,” she said. “It helps just to talk.”

After work, Butterfield goes home and smiles when her son’s dog is happy to greet her.

With a laugh, she admits that, despite being a cat person, the dog has grown on her.

“You have to laugh, or I would be crying, and I’ve done enough crying,” Butterfield said. “I just take it a day at a time.” 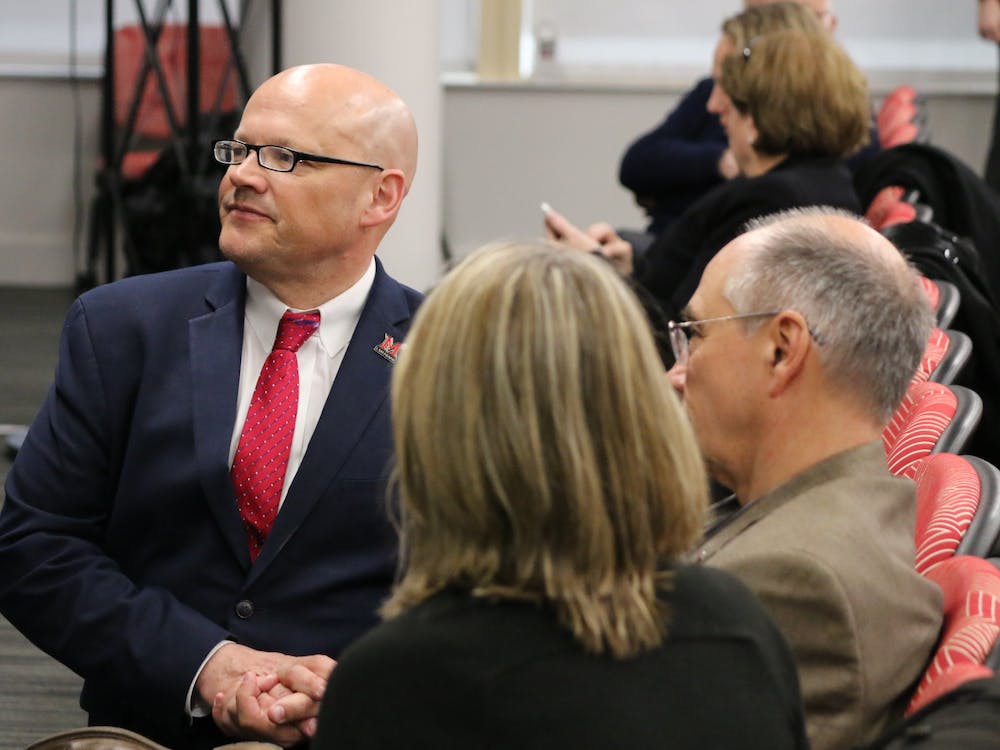 Miami University will be conducting online classes through the end of spring semester, according to a university-wide email from University President Greg Crawford — making Miami the fourth public university in Ohio, following Kent State University, OSU and University of Toledo, to make the call amid growing concerns over the spread of the novel coronavirus.