As I scrolled through my Twitter timeline last week, I noticed a lot of tweets about Billie Eilish, something not out of the ordinary for the past few months. After releasing her debut album in March 2019, Eilish quickly rose to fame.

The hot topic trending on Twitter this time? Her first time at the Grammys.

Throughout the night, Eilish remained humble. Her speeches were short and, at times, apologetic. She said that Ariana Grande deserved the award for Album of The Year, talked about how the other nominees’ fans would give her hate and for her final award of the night, simply said, “Thank you.”

Yet, instead of congratulating this 18-year-old girl on a major accomplishment, people on the internet are tearing her down and saying she didn’t deserve it.

It’s sad to think that a teenage girl like Eilish might feel bad for being so successful, despite the amount of work it took for her to get there.

She makes music in a bedroom with her brother, Finneas O’Connell, that over 55 million people listen to on Spotify. Although she only recently came into the mainstream, her success is not something that happened overnight. She released her first song in 2016, followed by her debut EP in 2017.

I’ve heard maybe three songs by Eilish. Whether you are a fan of her music or not, you have to admit that she’s obviously doing something right.

Eilish’s debut album, “When We All Fall Asleep, Where Do We Go,” won two Grammys. The album’s themes include depression, climate change and drugs, among other important topics, and the music style bleeds into several genres. It very clearly means something not only to Eilish and her brother, but to the fans as well.

But her critics reduced the work to senseless pop simply for the sound of a few songs (in addition to the fact it’s largely popular on the radio and among teenage girls).

Between being mocked for not knowing Van Halen, to predatory posts and hashtags trending on her 18th birthday and now people saying she doesn’t deserve a Grammy, it seems like Eilish just can’t catch a break.

We should be glad that there’s a space in popular music for young girls like Eilish in a time where female artists are so underappreciated.

After the 2018 Grammys, the president of the Recording Academy said that women needed to “step up” if they wanted to receive the same recognition as male artists. This comment discredited all of the women that have acted as the backbone of popular music, and music in general, for as long as I can remember.

Female artists going unrecognized or underappreciated is not an issue unique to the music industry. Despite her movie “Little Women” being nominated for six Oscars, Greta Gerwig was not nominated for Best Director, a category filled with male names. In the same realm, Lupita Nyong’o was not even nominated for her performances (plural) in “Us.”

Young girls in the public eye are especially scrutinized for everything that they do. Charli D’Amelio, a 15-year-old TikTok influencer, is ridiculed for posting harmless dance videos on the app. Even Greta Thunberg, another 17-year-old and a prominent climate activist, is harassed online by everyone from internet trolls to government officials and the President of the United States.

Billie Eilish is a pop sensation who deserves everything she’s accomplished so far. If the Recording Academy, of all people, can recognize that, so can we.

The misogyny that breeds unwarranted hate against girls and women is exhausting. You can be disappointed that your fave didn’t win without tearing other artists down, especially when the artists themselves are so supportive of each other.

Let girls and women exist, let them enjoy things and let them succeed. 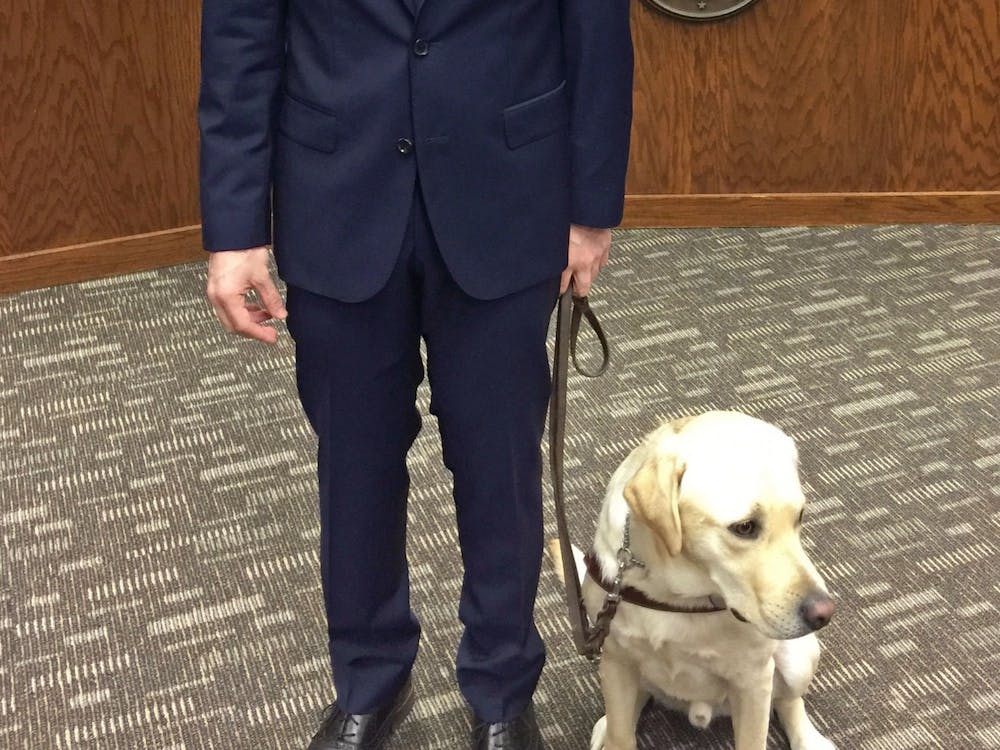 On his 18th birthday, Michael Molchan received a dog named Hawkins. While many people dream of getting dogs for their birthday, Hawkins is special.  The highly-trained yellow lab is not just a welcome companion. Hawkins serves as Molchan’s guide dog, too.