After winning hearts and inspiring fashions all across the world with her down-to-earth humor, brightly-colored clothes and contagious laugh on Bravo’s “Top Chef,” Carla Hall is as real in person as she is on the screen. Hall proved that when she visited Miami University on Nov. 14 for the last Lecture Series talk of the fall 2022 semester.

Growing up as a self-proclaimed borderline-introvert extrovert, Hall found her passion in performance at age 11, when she saw her uncle perform in the musical revue “Bubbling Brown Sugar.” She did theater until age 17, when she was deferred from Boston University for acting.

Taking that as a rejection, the Nashville native went on to study accounting at Howard University instead. After attending high school in the 80s, Howard was where Hall’s fashion sense truly began to flourish and where she modeled for the first time; even though she went on to work as an accountant in Tampa, Florida after graduation, she quit two years later.

“Your major is really only to teach you how to think and learn,” Hall said. “Most of you all are not going to really do the thing you major in.”

She certainly did not, as she moved to France after quitting the accounting profession, armed with 10 words of French and a single telephone number of a contact in the modeling industry, at the age of 23.

Surprisingly, it was there, in France, that Hall recognized her roots in American comfort food.

Hall, along with a few other American models living in France, would often visit the house of a woman named Elaine for a taste of home through delicious brunches. After one day eating macaroni and cheese at Elaine’s, Hall was struck with the realization that she did not know how to make mac and cheese.

She tracked down an American bookstore, found some cookbooks and began to cook.

From there, she was on the fast track to a culinary career in America. After returning to the U.S., she ran her own lunch delivery service known as the Lunch Bunch before working her way to an executive chef position in Washington, D.C.

In 2008, Hall was selected for a slot on the competitive cooking show “Top Chef” and placed as a runner-up, sparking the start of her food fame. She then graced the world’s television screens again in the 2010-11 All-Stars season before landing “The Chew,” a culinary talk show that ran for seven seasons; since its cancellation in 2018, she has hosted, judged or appeared on many other shows, such as “Halloween Baking Championship” and “Holiday Baking Championship,” “Worst Cooks in America” and even “Bojack Horseman.”

To say that Carla Hall lives life to the fullest is an understatement, and the world loves her for it — as do the students at Miami.

During her visit on Nov. 14, Hall spent the beginning of the afternoon at a student-run seminar, providing hilarious but relatable answers to queries such as how she adapted so well to her numerous careers, when fashion mattered most in her life and how she builds her famously statement outfits in the morning.

In true Carla Hall fashion, the celebrity chef respectively had a quip for each: “Who says I kept my cool?”, “In finding my style, I was really trying to find my authentic self,” and “The way I put together an outfit is very similar to the way I put together a dish. It’s about textures, flavors, a journey. It’s just the paints are different.”

She also focused on telling her life story, assuring students that to find her way in life, the only thing she did was “to be open and say yes.” This philosophy brought her many opportunities, from cookbooks to children’s books, Top Chef to The Chew and even to interviewing Michelle Obama. Her next dream is to do a one-woman live show combining cooking, storytelling and comedy, entitled “The Good, The Bad, The Me.”

Finally, she rapid-fired some of her favorite things to the crowd: R&B music, cumin and cinnamon, going with the flow during cooking instead of following a recipe, sour flavors such as lemons and, finally, when to use certain types of vanilla. (Madagascar Bourbon vanilla for sugar cookies, but Mexican vanilla in chocolate things, if you were curious.)

And her favorite recent project? A new “travelogue” show entitled “Carla Hall: Made with Love,” which will air Feb. 1 on Discovery+.

In the lecture later that evening, Carla again told the tale of her rise to fame from an unapologetically real point of view.

Unafraid to mention struggles with racism, sexism and even menopause — the latter of which she made a specific point to bring up multiple times throughout the talk, trying to bring awareness to a topic so often glossed over in today’s society — Hall made the audience laugh, gasp and even tear up at her hilarious, shocking and down-to-earth stories.

She also changed into three separate pairs of glasses, matching the tone of her talk to her frames.

The lecturer’s overarching theme was to discover and embrace who you truly are.

“I would rather lose a job being exactly who I am than keep a job being somebody else,” she told the captive audience, later adding, “To want perfection means you don’t want real life.”

Hall also owned up to many mistakes, gaffes and “oops” moments she had throughout her storied career, such as the time she tripped and fell live on camera, taking the opportunity to literally roll with it and perform a fun roll on the ground before getting back up. She even took the time to act out the moment, strutting across the stage in her yellow plaid Steve Madden platform boots. “If you own the moment,” she explained, “then life goes on.”

At the end of the lecture, she answered questions from the audience, such as what her favorite costume was from the Halloween Baking Championship (the skeleton), where her famous catchphrase “Hootie Hoo!” came from (a two-part call with her husband for when one of them got lost in public), what the last thing she read was (Jennette McCurdy’s “I’m Glad My Mom Died”), what she does to relax (meditate and listen to audiobooks) and easy recipes to make in a college dorm or for a first-time cook.

For that, Hall suggested a microwave souffle of an egg, boursin cheese and spices in a bowl. She also quipped that soups, especially blended ones, are very forgiving for first-time cooks and recommended a sweet potato and tomato bisque.

The celebrity chef ended her night in Oxford with a meet-and-greet in McGuffey Hall, where her contagious enthusiasm lit up the room crowded with fans both lifelong and new.

Senior speech pathology and audiology major Grace McKee is one of those longtime fans and called Carla Hall “one of the most authentic speakers” she’d ever heard.

“Sometimes I wondered if her uniqueness and spunk would be carried forth in person, or if some of it was exacerbated on TV, but it was truly her,” McKee said. “You could tell she was unapologetically herself.”

It’s safe to say that Hall will always have a place at Miami’s table after her visit! 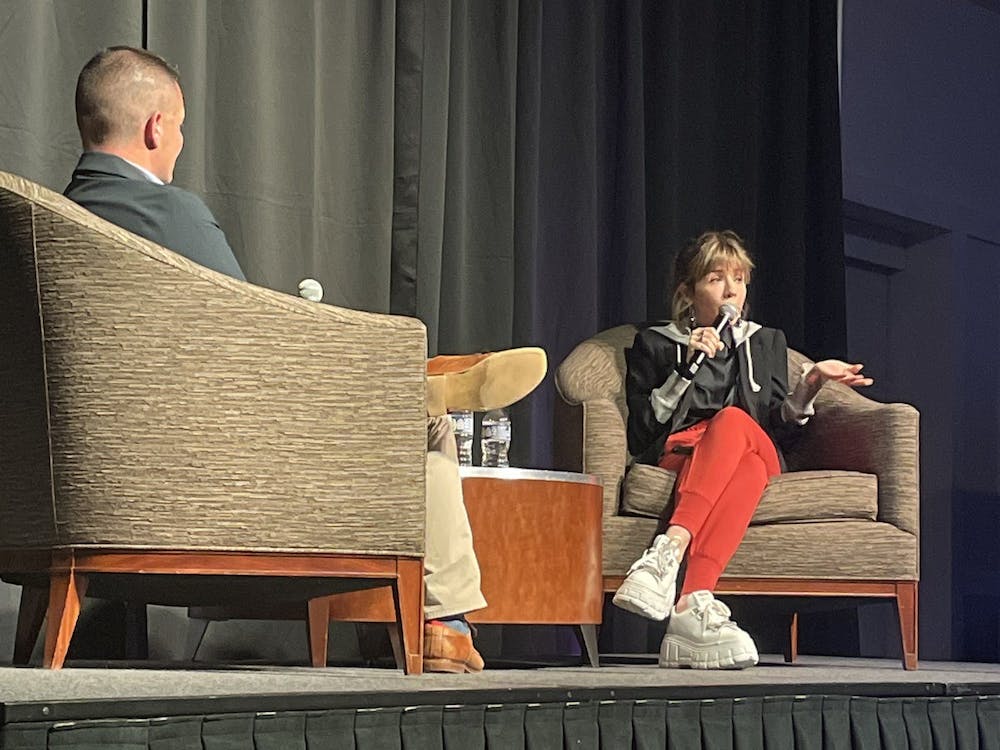 As soon as McCurdy entered the room, the audience burst into thunderous applause. She and Large shared a hug once McCurdy walked onstage. Large informed the audience that Miami is the first university McCurdy would be speaking at as part of her tour.