Greene spent his last two full seasons with the New York Islanders after being moved at the trade deadline in 2020 from the Devils, where he spent 14 of his 16 years. He played a total of 1,057 NHL games.

Despite not being the most skilled offensively, Greene was a defenseman that every coach could rely on. He averaged just over 21 minutes per game for his NHL career, with his highest average being 24:35 in 2013-14.

Before eating minutes for Stanley Cup contending teams in the NHL, Greene spent four years playing for the Miami RedHawks, from 2002-2006. He was Miami’s captain in his junior and senior seasons.

Greene won a Central Collegiate Hockey Association (CCHA) title with the Redhawks and advanced to the NCAA Tournament twice in 2004 and 2006.

However, these awards and experiences wouldn’t have happened if Greene didn't fall in love with Miami on his recruiting visit.

“Once you step foot on [Miami’s] campus, it’s a beautiful place, and I just had a good feeling when I went down there,” Greene said. “Obviously, it worked out for the best. Everything I had heard about Miami was true, and once I stepped foot there, I loved every second after that.”

Miami offered a lot, according to Greene.

“I thought it was a great opportunity to meet new people and start a new chapter fresh,” Greene said. “Going in, I thought I could be a good player and really establish this as a big-time program. I felt like I could be a part of the solution.”

However, a program with pedigree doesn’t build itself.

Current RedHawks hockey Head Coach Chris Bergeron was an assistant coach during Greene’s time at Miami. Bergeron provided nothing but praise after Greene announced his retirement from the NHL.

"I speak on behalf of anybody who knows Andy, within the Miami Hockey program or not, but he is such a fantastic human being, and we wish him nothing but the best in his retirement...we're just so proud of him and what a great career,” Bergeron said. “Hopefully, he can sit back and celebrate it a little bit because he deserves it.”

Greene had plenty of good things to say about his former coach too, highlighting the tough-love nature of Bergeron and his coaching style.

“He’s very passionate and very demanding, but in a good way,” Greene said. “He’s someone that loves the program. He puts his whole heart into it. He did back then, and I know he’s still doing that today. It was something that I always appreciated. The passion he has and how much he cares not just about the program but for you as a player. It was awesome to have, and I always appreciated it.”

Greene was inducted into the Miami Athletics Hall of Fame in 2019, helping to seal his legacy as one of the most influential players ever to don the red and white.

“It was a huge honor,” Greene said. “You don’t go in [to the program] and think I want to go to the hall of fame. You just want to be a good player and try to be the best you can be. Being recognized for that and be among people that are in there before me and that will continue to be elected in there, it was just a huge honor”.

However, as much as Greene looks fondly back on the induction, it’s not what he is most proud of. Instead, it’s his academic pursuits that have stuck with him over the years.

“I think the best part of that was being able to earn and get my degree,” he said. “It took me a while to get it, but I did get it. I always said I’d finish my degree and graduate from there, and that is something you can never take away.”

Greene’s legacy with the RedHawks lives on. He made his mark in Oxford and did great things in the NHL, carrying the values he learned from Miami into the professional scene.

It’s impossible to attribute the growth of a program to one player, but the RedHawks’ hockey story wouldn’t be close to what it is today without the impact of Greene’s leadership on and off the ice. 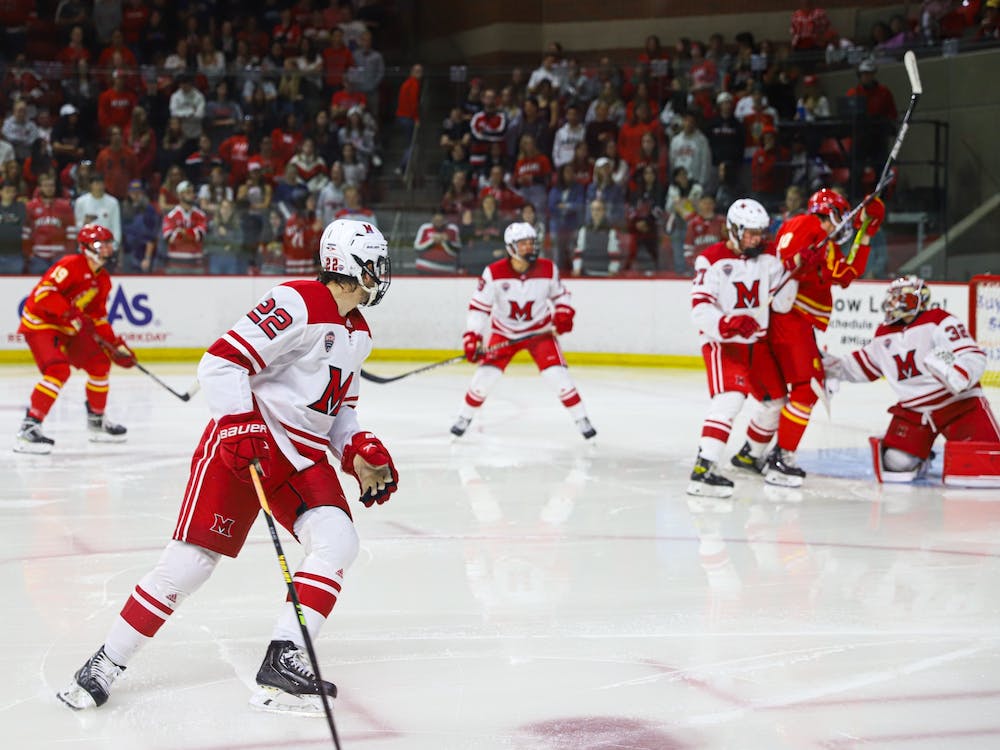