During the spring 2021 semester, first-year Molly Schneider and three of her friends signed a lease for their junior-year apartment that, at the time, didn’t even exist.

The girls planned to live in a four-bedroom apartment at the Caroline Harrison Building at the corner of High Street and College Avenue. A few months after Schneider and her roommates signed their lease, construction began on the new apartment building, but one week before Schneider was supposed to start her junior year, her roommate got a call that they needed to find somewhere else to live.

“One of our roommates got a call that [the apartments] were not going to be done for two, three weeks … and then my parents called the apartment company asking what happened, and then they extended [the delay] from two weeks to a month,” Schneider said.

Despite having more than a year to complete the building, the construction company, Robert Treadon & Associates, Architects, was unable to finish it — leaving more than 70 residents displaced.

Schneider said Lindsey Myers, co-founder of West High Street Investments and owner of the Caroline Harrison Building, called her parents and said the building failed to get an occupancy permit after a failed inspection earlier that day.

Myers did not respond to multiple requests for comment from The Miami Student.

Robbie Potter, a fire inspector for the City of Oxford Fire Department, said Myers has yet to schedule the final inspection to acquire the occupancy permit.

“We have not done the final building inspection yet,” Potter said. “We’ve done different parts … like the hydro flush … but we’ve not done a final fire alarm inspection, or final inspection or final sprinkler system inspection.”

On Aug. 11, the building failed a hydro inspection which tests that clean water is flowing through the sprinkler system, but the inspection passed the next day on Aug. 12.

On Aug. 16, less than a week before the start of the semester, Myers personally called each of the residents to say the apartment would not be ready in time to move in and emailed them a list of resources for other housing options. Myers also said that they would receive full refunds on any rent and deposits already paid.

The search for housing begins

Before even receiving her $600 deposit and $4,500 in rent back, Schneider and her roommates began searching for somewhere else to live, just four days before they were supposed to move back to Oxford.

Schneider now lives in a house with her roommates, but some residents like Lanie Dickson had to seek other options.

“My roommate and I were on the phone all day after we had gotten the call from [Myers]," Dickson said. "We compiled a super long list of real estate companies in Oxford for apartment buildings, hotels, Airbnbs and just different places to call to see if anything was available. Our biggest obstacle was trying to get month-to-month leasing.”

Dickson and her roommate still plan to move into the Caroline Harrison Building once it’s complete and didn’t want to be stuck in another lease, so they’re living at the Comfort Inn on College Corner Pike for now.

She and her roommate pay for their rooms each day.

“If we’re here for a month, it’ll be around $1,800 to $2,000, but we’re hoping to not have to be here that long, but either way, since we are getting a semester free of rent back from [Myers], we are actually kind of profiting off the situation in a way,” Dickson said.

A false sense of security from building managers and owners

Dickson spoke with Myers the day before the Aug. 16 announcement and thought the apartments were ready for move-in.

Maggie Arden, a junior marketing major, was also reassured by Red Brick Property Management that she would be able to move in but knew something wasn’t right when she tried to set up her utilities.

“We had contacted [Myers] a few times during the summer and the realtor that sold it to us, just asking if [the apartments] would be done, and when we tried to set up utilities, we couldn’t because it kept saying that the address basically didn’t exist,” Arden said.

Like Schneider and Dickson, Arden also signed in spring 2021 but planned to sublet her room for the fall 2023 semester as she was going to study abroad in Budapest. However, Arden couldn’t find anyone to take over her lease and ended up withdrawing from her study abroad program.

“I had everything set up in Budapest … and I did find someone the last week of school who was willing to sublease, but at that point, it was too late,” Arden said.

Although Arden was disappointed to give up her plans for Budapest, she was excited to live with three of her friends off campus for the first time. After struggling to set up her utilities, Arden’s roommate’s mother suggested they call the City of Oxford.

“She was like, we should call the city and see if there’s an occupancy permit,” Arden said. “I never thought I would have to worry about that, but she was right.”

Housing alternatives hard to come by

After Arden called the city, she and her roommates began scrambling to find a place to live, but Arden said it wasn’t easy.

“I gave one realtor a call, and I just asked what he had, and he was like, ‘I’m sorry. I don’t have anything. In the past 10 minutes, this is the ninth text I’ve received,’” Arden said.

“We were thinking second semester we’d go back [to the apartment] because that’s what our original plan was, but once we moved in and thought about it logically, we’re not going to go back,” Arden said. “It’s just a hassle to move everything.”

On Aug. 26, Myers sent an email to the displaced residents that the second floor was almost complete and he hoped to finish the third floor within the next three weeks.

No date has been announced for residents as to when they can move in.

However, Potter said even after the building gets the occupancy certificate, residents may not be able to move into the building right away.

“Because this is a new building, they also have to do their rental permit inspection as well before they allow students to come back in, but a lot of times [the city] will try to do them jointly,” Potter said. “They may try to do the rental inspections as well at the same time [as the occupancy permit] just to get them all knocked out.”

Potter did not confirm whether he thought residents would be able to move in within the next three weeks. 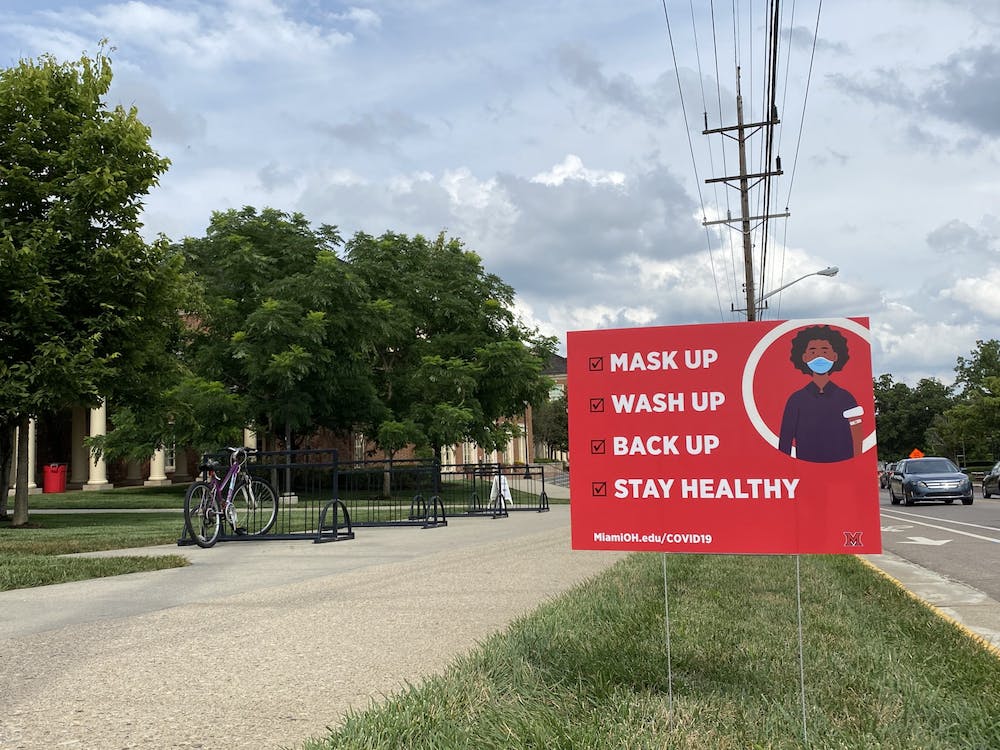