I like to think I’m pretty unpretentious in most of my food opinions – as someone who eats mostly fast food or frozen meals, I don’t have much room for food snobbery.

There’s one exception to this rule, though: pizza.

I’m not going to engage in the debate over whether Chicago or New York has better pizza, as I think there’s enough room in the world for both of them. There’s little question, though, that Chicago, my home city, is one of the pizza capitals of the U.S.

I try to keep an open mind when eating non-Chicagoan pizza, but it’s hard when nearly every strip mall in my hometown houses a pizzeria that would blow any place in Ohio out of the water. That said, I love pizza too much to only eat it when I’m home, so I make do.

Oxford has more pizza places than I realized when I first came to Miami, and it houses a pretty good mix of chains and local restaurants. But, like anything else, some are better than others.

Bruno’s Pizza has been in Oxford forever – for more than 50 years, it’s been serving greasy pies to drunk and/or hungover community members.

Perhaps my dislike for Bruno’s stems from the fact that I’ve never eaten it while drunk or hungover. Or, perhaps it just isn’t very good.

I hate dissing food, but I just can’t find much to praise about Bruno’s. The crust is bland and cardboard-esque, the sauce is practically nonexistent and the cheese is covered with a layer of grease.

The one thing Bruno’s has going for it is that it offers pizza by the slice, but I’d rather buy an entire good pizza than one of these sad slices.

I know a lot of people love Bruno’s, and that’s their prerogative. It just isn’t for me.

Including Sundial, the pizza place in the Armstrong Student center, may seem like an odd choice, but it’s probably the most easily accessible pizza place for Miami students. Because it’s in Oxford and not a chain, it technically fits the criteria of this ranking.

For a tiny pizza place in a student center, it’s not bad, but Sundial’s main issue is that the food sits out for hours and hours. If you go around dinner time, you’ll likely get a fresh slice, but if you go during a low-traffic time of day, your food may be stale and cold.

Perhaps ranking Sundial against other places that make their pizza to order is unfair, but I figured it would provide context. Given the choice, I’d rather eat Sundial’s stale, cold pizza than Bruno’s, and I think that says a lot.

This may be an unpopular opinion, but, while I really like LaRosas’ food, I don’t love their pizza.

Their pasta is good – it’s not the most authentic food in the world, but it’s comforting and consistently tasty. Similar to Olive Garden, you’re not going to LaRosa’s to get something that tastes like it’s straight from Rome.

The pizza is mediocre, but not in a comforting way. Every time I’ve had it, it’s been very dry with hardly any sauce at all, and the crust is bland. I’ve learned to order a side of marinara sauce for dipping because it’s more like cheesy bread than pizza.

I suppose some people may prefer drier pizza, but the sauce is my favorite part, so LaRosa’s doesn’t quite do it for me. Most of the other food is great, though!

Rapid Fired is different from all the other places on this list because of how fast and customizable it is. It’s almost like Subway, but for pizza.

For this reason alone, I really like Rapid Fired. Their pizzas are small and only feed one or two people, which means you don’t have to compromise with others who may have different topping preferences.

Like Subway, Rapid Fired’s ingredients often sit out for a long time, so the food is somewhat less fresh than other pizza places, though I don’t think it’s that noticeable. Because it’s essentially  fast food pizza, the quality of the food also isn’t quite on par with other places, but for the price and convenience, Rapid Fired is a very solid choice.

Sorriso is easily the “fanciest” place on this list – walking into the restaurant and seeing the dark and romantic ambiance, you would never guess its main specialty is pizza.

This fanciness, of course, comes with slightly higher prices than Oxford’s other pizzerias, but the reason the food is slightly pricey becomes evident as soon as you try it.

The cheese pizza is topped with fresh mozzarella slices in addition to the standard mozzarella blend, and the sauce tastes vibrant and fresh. The pizzas are also quite large for such a fancy place – the menu says each pizza feeds two hungry people, but my hungry boyfriend and I only finished half of ours.

My one complaint about Sorriso’s pizza is the crust. It’s very thin, which I do like because it’s reminiscent of the pizza we have at home in Chicago, but thin crust cut into giant triangular slices makes for a floppy pizza. I had to cut the first few bites of each slice with a fork and knife to prevent the toppings from sliding off.

If Sorriso cut its pizzas into squares rather than triangles, which is how Chicago pizzerias combat the floppy slice issue, it would be the best pizzeria in Oxford by a long shot. As it stands, it’s definitely one of the best, but it’s not perfect.

If there’s one thing I’ve learned during my almost three years at Miami, it’s that SDS’s pizza is polarizing. Some people say it’s the best pizza in Oxford; others say it’s the worst.

As you can see from its place in this ranking, I fall into the first group.

The reason I love SDS so much is because it’s exactly what I want when I’m ordering pizza. It’s greasy (but not in a gross way), comforting, cheesy, saucy and, best of all, cheap.

The only small complaint I have about SDS is that the cheese can be a little excessive for me – I do love cheese, but I’m lactose intolerant, and overly-cheesy pizza is hard on my stomach – but I think there’s enough sauce to balance it out, unlike other places like LaRosa’s.

Quality-wise, Sorriso undoubtedly beats SDS. But when you’ve had a rough day and you need some comfort food, you don’t necessarily want a $20 pizza with fresh mozzarella slices. You want a classic, delicious, no-frills pie, and on that front, SDS delivers. 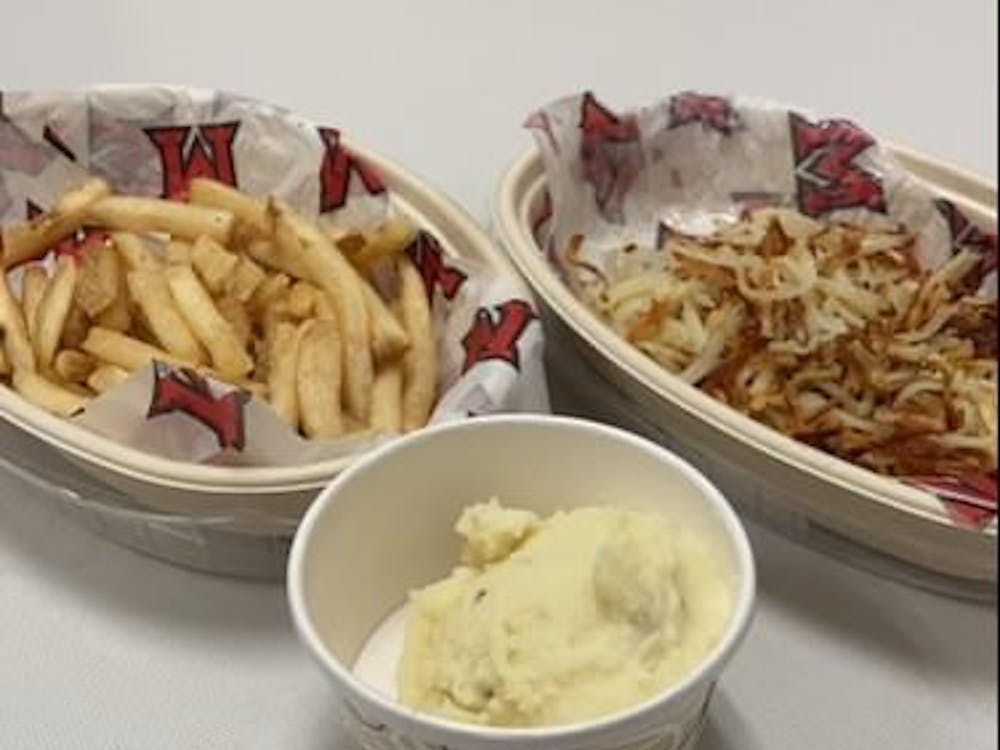