It was a team effort Wednesday night. Four out of the five starters scored over 10 points. Senior guard Mekhi Lairy, the only starter not to reach the feat, was close with eight points.

On the defensive side of the ball, the ‘Hawks were impressive. The team forced 11 turnovers while committing just nine fouls. The Hatters did not score in the first four minutes of the game.

The RedHawks opened up the match with an 8-0 advantage thanks to a pair of triples from senior forward Dalonte Brown and junior guard Myja White. The team never trailed in the game.

Brown finished the night with 16 points on 5-of-8 shooting, including 3 of 5 from behind the arch.

Brown and White’s consistent stroke in the first half covered up slow starts from the stars of the first two games. Lairy and junior guard Dae Dae Grant each dropped two points on 1-for-5 shooting, and didn’t make a 3-pointer in the first half.

RedHawks Head Coach Jack Owens told his team to “just stay the course” when the Hatters attempted to come back in the ball game.

The RedHawks saw its 15-4 lead midway through the first half trimmed to three after consecutive Stetson splashes from downtown. However, tough finishes at the rim from senior forward Precious Ayah and Brown sparked a 10-0 run, giving the RedHawks a 25-12 control.

Ayah found great success in the pick and roll game. He tailed a career-high 18 points and eight rebounds on 78% shooting. The big man credits his performance to his teammates.

“It was basically my guards,” said Ayah. “My guards put me in the best position to get those easy shots.”

The RedHawks went into the locker room with a 38-26 lead following a Brown block which saved a potential buzzer-beating Hatter score.

The second half went back and forth. The RedHawks jumped out to a 15-point advantage, the highest of the game. However, a few 3-point jumpers from the Hatters brought it under single digits.

White put the RedHawks up by 14, but another wave of Hatter triples set the lead right back under 10. Around half of the Hatters made field goals were three-pointers, which kept them in the game.

Grant found his shot in the second half. He had a six-for-nine first-half 3-point outing in the last game but struggled in this one. Thankfully, he scored 16 points in the second half on 5-of-10 shots, including 2-for-4 from 3-point range. With eleven minutes left, he hit a jumper off one foot as the shot clock expired to make the score 59-49.

A Grant 3-pointer set the scoreboard at 64-51, but it did not take long for the Hatters to throw another lead-cutting blow to bring the game back to single-digits.

Miami went up double-digits again with four and a half minutes remaining, but an and-1 from Stetson forward Josh Smith a minute later decreased the Hatters’ deficit to eight. Smith stood out from the rest of his team with a 24 point, 10 rebound night.

The Hatters could not advance their comeback farther from being down eight points in the second half. In the final two and a half minutes, the RedHawks closed the game on an 8-2 run to win by 15.

The RedHawks play its third match of a four-game home stretch against Heidelberg University at 2 p.m. on Saturday, Nov. 20. The game will be broadcast on ESPN3. 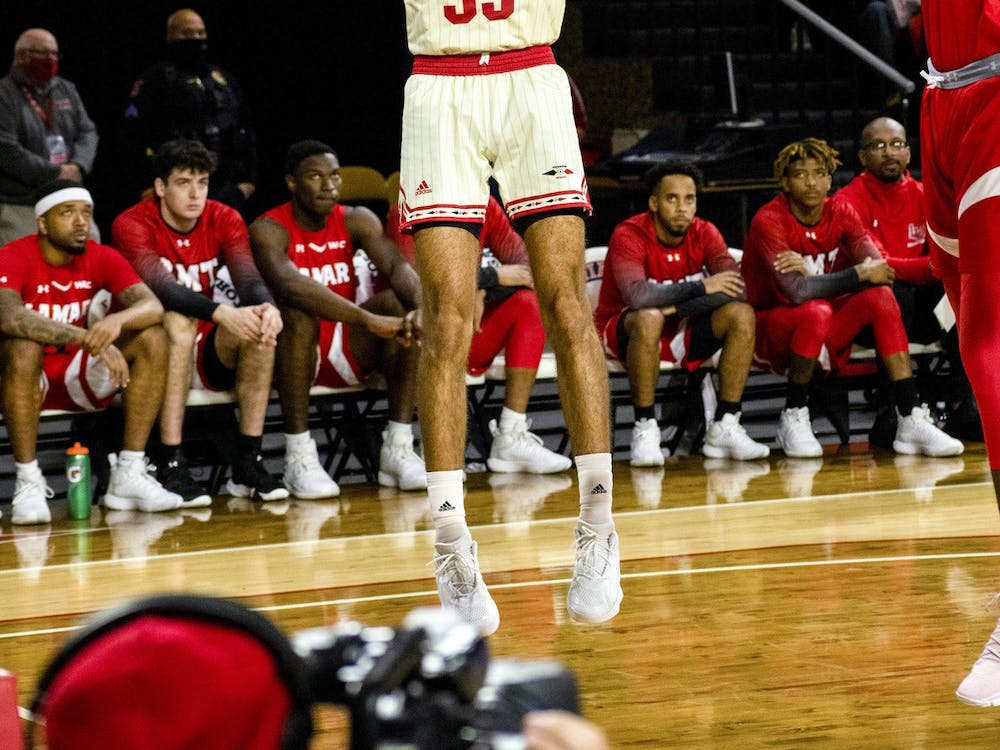 After a huge win on the road at Georgia Tech, there was concern that the Miami RedHawks men's basketball team would come out flat against the Lamar Cardinals.