Two years ago, in March 2020, students at Miami’s Luxembourg campus were sent packing back to the states following former President Trump’s announcement of travel bans to Europe.

This time last year, 30 students studied abroad in Luxembourg. But this semester, the program is hosting 101 students in Europe, said Ryan Dye, the director of Education Abroad.

Anna Webster, a junior kinesiology major and a student in Luxembourg this semester, always had plans to study abroad.

“My mom studied abroad in high school,” Webster said. “She went to Ecuador for a year, and she always talked about how incredible it was and how much fun she had, and so I knew that when I went to college I wanted to study abroad.”

Despite prolonged effects of COVID-19, Webster said the pandemic hasn’t strongly affected her experience in Europe.

While some students were disappointed in not being placed with a host family due to COVID-19 concerns, Webster applied to live in Miami-sanctioned apartments from the beginning.

As for traveling, Webster said European countries take their precautions more seriously than the U.S. Different locales enforce their regulations more heavily than others, but almost everywhere requires some form of masking and proof of vaccination and/or a recent negative COVID-19 test.

Webster has visited Paris, Italy and Germany, but her favorite destination has been Amsterdam, despite the overcast skies and looming showers during her visit.

The people in Europe, she said, aren’t as friendly as Americans. But in Amsterdam, she felt nostalgia for her home country.

“I really liked Amsterdam,” Webster said. “In Amsterdam, the people were a lot friendlier, and so it felt a little bit more like home.”

Anna Simile, a senior anthropology major also studying in Luxembourg, was one of the few students who got placed with a host family. She said it’s been everything she could ask for and more.

“[My host mom] has made me several Luxembourgish dishes,” Simile wrote in an email to The Miami Student. “In return I made her some buckeye desserts and American chili. She’s so sweet, and her daughters are so much fun. I truly couldn’t have asked for a better family here.”

“I’m in an art history class, and for our final project we have to pick a painting or a piece of architecture that we have seen in person during our travels and discuss it,” Simile wrote. “I’m also in a music history class, where we get credit for going to concerts at the Philharmonie in Luxembourg City. I wouldn’t say the classes are easier or harder, they just have different expectations and assignments.”

Though the classes aren’t harder, Simile said the travel aspect can add a unique sense of anxiety missing from life in Oxford.

“Sometimes it can be stressful to balance classes and traveling, especially because there are classes on Fridays,” Simile wrote. “Sometimes the weekend feels a little bit like being put in a pressure cooker to get to your flight or train or bus on time and making sure you’re back for classes, but that’s why we came on the trip, right?”

Luxembourg students left this week for a weeklong study tour, one of the only travel events sponsored by Miami alumni and with an itinerary made by professors. Simile traveled with her class to Slovenia, while Webster is spending the week in Poland discussing the rise and fall of Hitler.

While Dye is satisfied with the study abroad program this semester and hopes that students enjoy their time exploring the world, he believes the numbers will only go up from here.

“There's a lot of pent up demand that we are working very hard to satisfy,” Dye said. “And we're very optimistic that the study abroad enrollment for the next foreseeable future is going to be quite strong.” 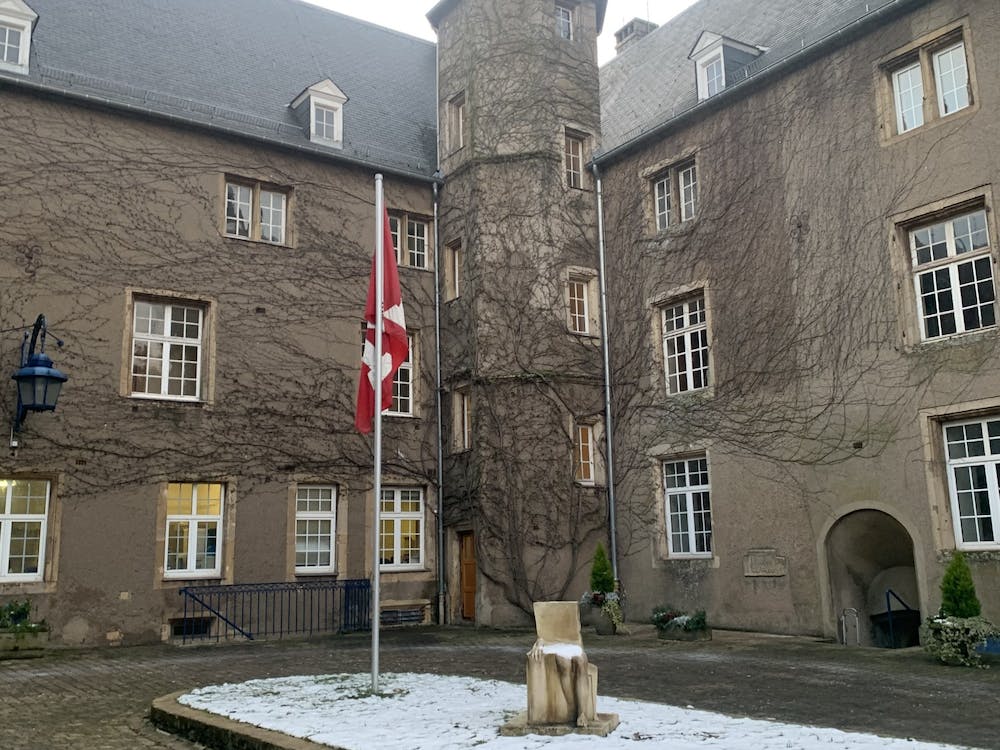 Masking up in Lux: Miami students make the most of study abroad amid COVID