This year, Miami again found itself with a 1-3 record after a tough non-conference slate. A conference championship rematch with Central Michigan awaited the RedHawks in its first Mid-American Conference (MAC) showdown.

The ‘Hawks prevailed, 28-17, establishing the team’s place as a contender in the MAC yet again after only playing three games last year due to COVID-19 health and safety protocols.

There might not be a wide receiver duo in the MAC as productive as senior Jack Sorenson and redshirt junior Mac Hippenhammer. Hippenhammer led the team with eight catches for 170 yards, while Sorenson recorded seven catches for 66 yards and two touchdown catches.

The pair knows their roles: Sorenson is the go-to man for screen passes and fade routes in the back of the end zone, while Hippenhammer is the deep threat.

Sorenson’s first touchdown catch was a 36-yard deep ball in the end zone, while his other six grabs were short throws that accounted for just 30 total yards. On his second touchdown grab, the sixth-year senior climbed the ladder to corral a high screen pass from quarterback A.J. Mayer and followed his blockers to make the score 28-17.

Hippenhamer, however, had three catches for 30 or more yards, including a 51-yard grab early in the second quarter.

The Penn State transfer came up big in the fourth quarter after Central Michigan took a 17-14 lead. Hippenhammer caught three passes in the last period, including two catches that went for over 30 yards each.

While Miami’s defense wasn’t perfect, it got the job done.

CMU made it past the 50-yard line and into Miami territory on eight different occasions. The results: two touchdowns, three field goal attempts (two misses), two punts and turnover on downs.

Pressure from the defensive line was a big key in keeping Central Michigan out of the end zone. The Chippewas advanced the ball to Miami’s 19-yard line on its third drive, but a sack by defensive ends Lonnie Phelps and Dominique Robinson moved the ball back to the 31, forcing a longer kick and an eventual missed field goal.

The RedHawks mixed and matched quarterbacks for the first four games of the season, giving redshirt sophomore A.J. Mayer extended play time to rest sophomore Brett Gabbert. In this contest, however, Mayer only came in for one play in the first half, running for a first down on third and one.

Gabbert looked every bit of his 2019 self in the first half. He completed 12-of-20 passes for 171 yards and two touchdowns, and gained 20 yards on the ground.

At the end of the first half, Gabbert went into the locker room with an injury on his right side.

Filling a familiar role, Mayer relieved the injured Gabbert and didn’t miss a beat. Despite a goal line interception, he completed 13-of-18 passes for 179 yards and two touchdowns, leading the RedHawks on two fourth quarter touchdown drives after falling behind 17-14.

While Mayer’s role and Gabbert’s injury status going forward remains to be seen, the RedHawks feel comfortable as long as one of the pair is leading the offense.

Big plays given up by secondary

Miami’s run defense was stout, giving up just 52 rushing yards on 1.9 yards per carry. The pass defense? Not so much.

The RedHawks gave up 378 passing yards, allowing three different Chippewa receivers to grab six or more catches. The secondary gave up five catches for more than 20 yards, including a 41-yard touchdown pass early in the second quarter.

If the RedHawks want to bring home another MAC Championship, the team will have to shore up its defense for the rest of conference play. 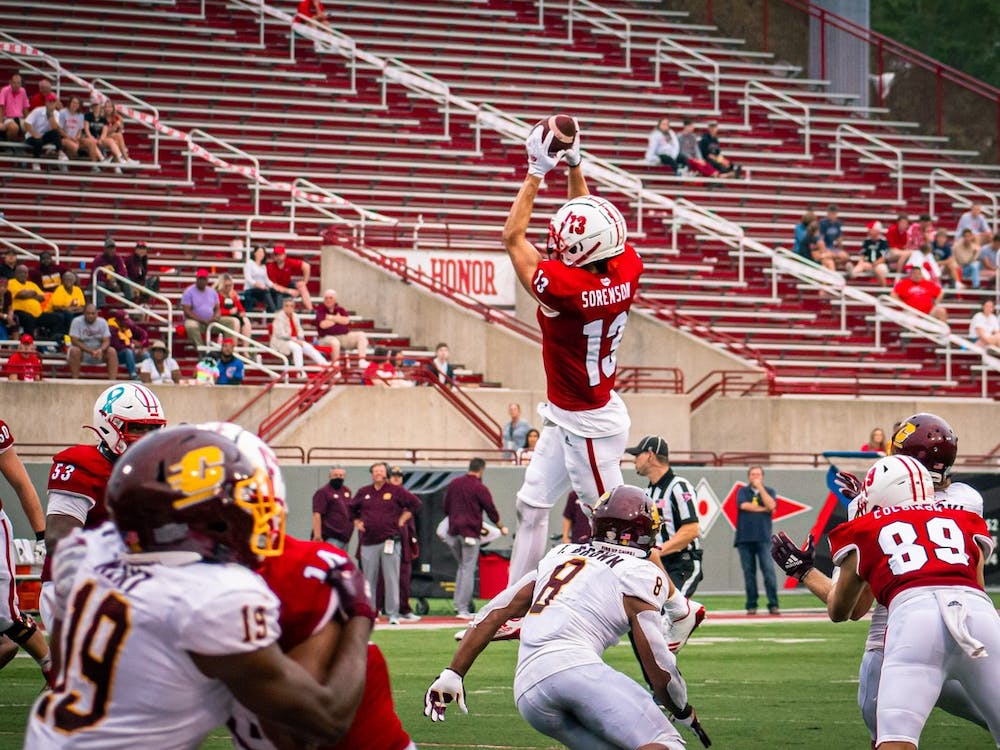