Four seats are up for grabs in the upcoming Nov. 2 Oxford City Council election. But the winners are all but decided.

Two incumbent councilors, David Prytherch and Chantel Raghu, are running for reelection unopposed. The other two seats belong to Edna Southard and Mike Smith, both of whom are term-limited and cannot run again.

There won’t be any competition for the empty seats, either, as community members Amber Franklin and Alex French are each running unopposed to fill the vacancies.

Should Franklin and French be elected, they will enter the Oxford Courthouse on Nov. 23 as public officials for the first time.

Amber Franklin: Promoting voices both in and out of the classroom

“A few people started asking me if I'd be interested in running [in summer 2020],” she said. “I'll be honest, my trajectory was like, hell no, no, I'll think about it, maybe and then finally, yes.”

It wasn’t until January that the assistant professor of speech pathology and audiology agreed to launch a campaign. Since then, it’s been a year of firsts. Aside from making a Facebook page for the first time, Franklin said getting involved in local government has been a source of hope for her.

“I’ve become more optimistic through the campaign,” she said. “When you come from a small town, you're going to see people at Kroger, you're going to see them Uptown. There's something that is really humanizing about understanding that you have a close relationship, even just in passing, with the people that you are engaging with.”

Before moving to Oxford 10 years ago, Franklin worked as an acting assistant professor at the University of Washington in Seattle. She was friends with two Miami University faculty members. When one of them left her position and moved to Montana, Franklin decided to apply.

Franklin’s friends supported her application, but cautioned against living in Oxford as a Black woman.

“They're both white women,” she said. “They both said, ‘Oh, I'm trying to imagine you in Southwestern Ohio, and you know, Oxford's not very diverse. You're used to cities. I don't know if you're going to be happy here.’”

Not deterred, Franklin moved to Oxford and was joined a year later by her then-boyfriend, now husband.

Her experience hasn’t been without hardship.

“My negative experiences really come from being called the n-word a few times while going for walks,” Franklin said. “It's something that I’ve experienced more in Oxford than anywhere else I've lived, honestly. But as painful as it is to have that experience, it kind of also makes me realize how important my voice and my presence is here for other people who are underrepresented.”

As a speech pathologist, Franklin said she understands the power voices carry in society, a fact that informed her campaign slogan: “Lift Every Voice.”

“People really just want to be heard,” Franklin said. “Even if we can't always agree on something, I think people feel really marginalized when they feel like their views and their experiences don't matter.”

As one of the first members of the Oxford Police Community Relations and Review Commission, Franklin isn’t new to thinking about ways to improve OPD. She said a social worker could help respond to nonviolent calls and alleviate officers’ responsibilities.

“Officers are working hard, but they can't do everything,” Franklin said. “A lot of social services that have been sort of undercut, our police officers end up being the main responders for all of those issues. If we can get a social worker who can help support our police officers by taking away some of that burden … that's a great way to meet some of the needs of our community.”

Mental health, Franklin’s second core issue, is personal to her.

“I lost my first boyfriend to suicide when I was a teenager, when we were both teenagers,” Franklin said. “I know how difficult life can be for people who feel like they don't have any way out, and how tragic it is to lose somebody close to you who felt like they didn't have another way out.”

Franklin said mental health resources in Oxford have largely migrated to Hamilton. As a city councilor, she hopes to expand services in Oxford and better advertise the services that nearby communities offer.

Franklin was a tenant for her first six years in Oxford. She said her position as a Miami faculty member made it manageable, but the lease structure isn’t set up for residents.

“I was surprised when I was asked to renew my lease in February, even though my lease didn't expire till August,” Franklin said. “I think about people who don't have the luxury of having that kind of job security to commit to a lease six months before the lease expires.”

Franklin said she will work to create more flexibility in the housing market in Oxford and lay the groundwork for more mixed-income housing.

Above all, though, Franklin said she hopes her position as both a faculty member and a councilor can help facilitate conversations between the university and the community.

“I see myself as a bridge builder,” Franklin said. “As soon as we stop having conversations, that's where we're more likely to get into trouble.”

When Alex French moved to Oxford 15 years ago, she knew she was home.

“I came to Miami, and I came home,” French said. “I remember the day that I toured. All my adult friendships have been in Oxford, it’s where I've lived for the past 15 years.”

Originally from Cleveland, French studied psychology at Miami University before going to graduate school in New York. After earning her Masters in political psychology, she returned to Oxford.

Now, she’s running for a seat on City Council with “Come Home to Oxford” as her campaign slogan.

“What I want to do is create an Oxford where students who graduate can see a path forward in Oxford, that you too can make Oxford your home,” French said. “I think a lot of students, when they graduate, think that, ‘I absolutely have to leave Oxford to have a job, to have a life, to have a career,’ and I'd like that to not be the case.”

Now, she works as a program manager for the organization, designing programs for adults working in schools to recognize students struggling with mental health.

“Working at nonprofits, the funding has to come from somewhere, so I'm pretty experienced in procuring funding to get done what I want to get done,” French said.

French said her experiences as a student, educator, community member and longtime bartender Uptown provide her with a unique insight into how Oxford functions.

“There was this weird nexus of experiences that I've had, and I was like, ‘That voice is missing,’” French said. “There's nobody on council right now who has lived here as a bartender, as a professor, as a student, and I think that that voice needs to be there to help that relationship between Miami and Oxford.”

The university-city relationship inspired French to run for council when she saw gaps between how Oxford and Miami handled COVID-19. Off-campus students, she said, were left in limbo with little accountability for their actions, and residents didn’t know how to report mandate violations like large house parties.

French has focused her campaign on three core issues in addition to the Miami/Oxford relationship: affordable housing, environmental initiatives and supporting local businesses.

As a councilor, French said she will promote intentional development in the community to ensure affordable housing stays affordable. She said current initiatives like the Oxford Cottage Community Project are important to pursue while listening to community voices for feedback.

“[Housing in Oxford] is a puzzle that you have to fit together,” French said. “But within that puzzle, there are still spaces that we can use to meaningfully lean into property development.”

On the environmental front, French said she will support initiatives brought forward by other councilors, including curbside composting and energy-efficient LED lighting Uptown.

As a former bartender, French said she hopes to leverage her connections with Oxford businesses to encourage changes in sustainability in the private sector.

“How can we work with what is our biggest industry in town, food and hospitality?” French asked. “I would like to have conversations with [businesses] about how we can make small changes in the restaurant industry that can have a huge impact on our town.”

French’s final initiative, supporting local businesses, ties back into her goal to improve the relationship between Miami and Oxford. She said more summer events could help, but Miami could also offer coupons to visitors and alumni rather than presenting on-campus dining as the only option for prospective students and guests.

When French’s time as a councilor begins, she hopes to open a greater dialogue between the community and its government.

“I want to help our Council just do more of the great work it's already doing, but do it while we're listening to everybody along the way,” French said. “I want people to come talk to me, because we may think that we're doing an amazing job on Council, but until we find out from the community what they actually think, we don't know.” 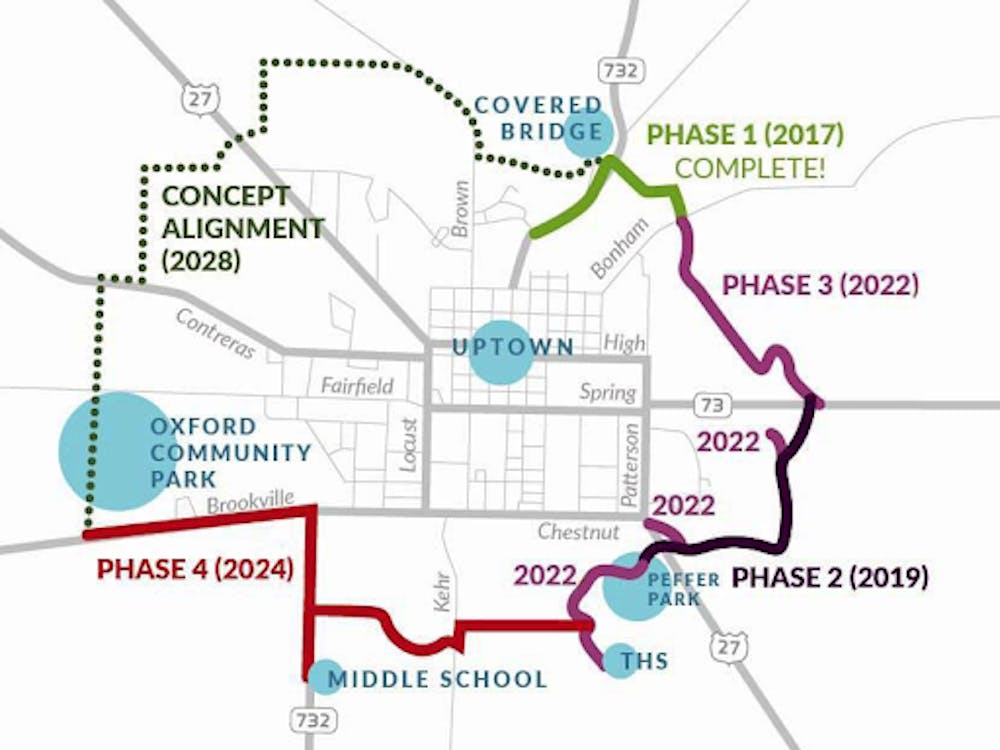