The NFL draft used to be a rinky-dink operation, occuring in a hotel ballroom somewhere with little fanfare. The first draft to appear on television was in 1980, on a (then) little-known network called ESPN.

Now, the NFL draft is one of the biggest television events in sports. Every year, fans watch in hopes that their team will pick the players that will turn their franchise into contenders.

Along with draft fever is the dreaded mock draft. Every year, fans and analysts alike try to predict where certain prospects will land and which teams will make a bold move to shore up their roster.

This year, The Student’s sports staff did its own mock draft. With four writers participating, each writer made eight draft selections for their respective team. This was a one-round mock draft only, with no trades allowed.

Without further ado, let’s get into it.

Jack Schmelzinger’s pick: Zach Wilson, QB, BYU — After three mediocre years from former top-pick Sam Darnold, the Jets (again) will try to grab their quarterback of the future. Wilson has freakish arm talent, and no play is dead with the former BYU Cougar on the field. His mechanics and pocket play need a little cleaning up, but the talent is there.

Lukas Nelson’s pick: Justin Fields, QB, Ohio State — Kyle Shanahan gets his quarterback of the future. Mac Jones is projected in this spot by a lot of mock drafts, but it’s hard to imagine trading up all the way to the third spot and not take the guy with the most talent. Fields gives the Niners a quarterback with size, accuracy, arm strength, football IQ and toughness to boot.

Jack Mueller’s pick: Kyle Pitts, Tight End (TE), Florida — If the Falcons are serious about keeping Matt Ryan, Atlanta should look no further than adding a transcendent weapon to line up next to Julio Jones and Calvin Ridley.

Chris’s pick: Penei Sewell, Offensive Tackle (OT), Oregon — The Bengals could go pass-catcher here, but Joe Burrow could throw to scrubs like me and be successful as long as he has time in the pocket. Sewell will give him that and help ensure Burrow’s rookie-year injury doesn’t turn into an annual event.

Jack Schmelzinger’s pick: Jamarr Chase, Wide Receiver (WR), LSU — After moving back with the 49ers, the Dolphins traded back into the top six for a chance at one of the extraordinary skill position prospects in this year’s class. With Pitts off the board, Chase is the best player available.

Lukas’s pick: Devonta Smith, WR, Alabama — Word of advice to the Lions: don’t overthink this. Smith was the best player in college football last season and the best guy on the field in the national championship game. Embattled quarterback Jared Goff gets a receiver he can force-feed with slants and screens.

Jack M’s pick: Trey Lance, QB, North Dakota State — Carolina follows the Chiefs' footsteps and drafts a raw QB prospect to develop behind Sam Darnold while the team continues to rebuild. Lance could start for the Panthers if Darnold doesn’t turn it around.

Chris’s pick: Micah Parsons, Linebacker (LB), Penn State — If the top four quarterbacks are off the board, as they are here, the Broncos should just stick with Drew Lock and look for a defensive playmaker. With Parsons, they get the most highly touted defensive player in the draft.

Jack S’s pick: Patrick Surtain, Cornerback (CB), Alabama — With great size and outstanding ball skills, Surtain can help out the Cowboys’ secondary that ranked second worst in opponent passer rating last year. He would slot in across from former college teammate Trevon Diggs to form what could be a pretty scary corner duo for years to come.

Jack M’s pick: Jaylen Waddle, WR, Alabama — The Eagles don’t know who their starting QB is yet, but giving the offense a dangerous receiver that has big-play potential to a new signal-caller can’t hurt.

Jack S’s pick: Alijah Vera-Tucker, Offensive Guard (OG), USC — The Vikings are in bad shape at the guard position. Like, really bad. Vera-Tucker is a big and athletic guard, enough that he could even play tackle in a pinch.

Lukas’s pick: Mac Jones, QB, Alabama — The Patriots need a quarterback of the future, and Bill Belichick hopes Jones can be that guy. Jones brings accuracy, toughness and a championship pedigree to a team that hopes to return to their championship-winning ways.

Jack M’s pick: Walker Little, OT, Stanford — Little sat out the 2020 season to prepare for the draft after a knee injury. The former All-PAC selection has the highest ceiling of any O-Lineman on the board after Sewell.

Chris’s pick: Christian Barmore, Defensive Lineman (DL), Alabama — Las Vegas’s front seven struggled to get after the quarterback last season, placing fourth-last in the league with 21 sacks. Barmore can remedy that after recording 9.5 tackles for loss and eight sacks for Alabama last season.

Jack S’s pick: Kwity Paye, EDGE, Michigan — Paye is an athletic freak of epic proportions. At Michigan’s pro day, he (supposedly) performed the three cone drill (a test of agility) in 6.43 seconds. No running back or receiver performed the drill that quickly at the 2020 NFL combine. Oh yeah — he also weighs 261 pounds.

Lukas’s pick: Jeremiah Owusu-Koramoah, LB, Notre Dame — Owusu-Koramoah may be listed as a linebacker, but Pro Football Focus (PFF) gave him the second-best slot coverage grade in the entire nation in 2020. The 2020 Dick Butkus award winner is the perfect linebacker for modern football.

Jack M’s pick: Greg Newsome II, CB, Northwestern — Losing Kyle Fuller will hurt the secondary, putting pressure on second year Jaylon Johnson to shut down one side of the field. Chicago needs another big presence on the opposite side of the field, and they should keep the 6’1 Newsome in the Windy City.

Chris’s pick: Christian Darrisaw, OT, Virginia Tech — The Colts sport a top-10 defense in the NFL. Translation: They don't need much help on that side of the ball. So why not support new quarterback Carson Wentz and all of his weapons by drafting Darrisaw?

Jack S’s pick: Caleb Farley, CB, UVA — Tennessee will upgrade its secondary this weekend. Likely on night one. The playoff team ranked 31st in passing touchdowns allowed, and 29th in passing yards allowed in 2020. Farley — a former quarterback — has all the tools to be elite in the NFL. He hopes he can put it all together.

Lukas’s pick: Azeez Ojulari, EDGE, Georgia — Every team could use another pass rusher. Ojulari led the SEC in sacks (8.5) and tackles for loss (12.5) in last year’s condensed season.

Jack M’s pick: Teven Jenkins, OT, OK State — Pittsburgh takes the best O-Lineman left to give an aging Ben Roesthlisberger more pass protection. Jenkins can play either side of the line and didn’t allow a sack in 2019 or 2020.

Chris’s pick: Rashod Bateman, WR, Minnesota — With the first overall pick, the Jaguars took QB (and potential franchise savior) Trevor Lawrence. Now, they need to restock their barren cupboard with playmakers to help him out. Bateman gives Jacksonville a good size-and-speed wideout to be Lawrence’s No. 1 target.

Lukas’s pick: Asante Samuel Jr., CB, Florida State — After shoring up their edge rush and safety in free agency, the Browns should go corner in the first round, and Samuel was the best available. After Surtain and Horn, Samuel is the third corner taken in this mock draft whose father also played in the NFL.

Jack M’s pick: Terrace Marshall Jr.,WR, LSU — New Orleans enters a new era post Brees, and whether Taysom Hill or Jameis Winston is the QB, a 6’3 receiver on the outside should serve as a nice tandem with Michael Thomas.

Chris’s pick: Elijah Moore, WR, Ole Miss — Aaron Rodgers made Green Bay’s 2020 pick of quarterback Jordan Love look laughable with his MVP play last season. So instead of making another gargantuan mistake and continuing to force Rodgers out the door, the Packers should throw him a bone. Moore possesses stretch-the-field speed, which makes him a great compliment to do-it-all receiver Davante Adams.

Jack S’s pick: Jason Oweh, DE, Penn State — The Bills add to a thin (and quickly aging) edge rush with the athletic Oweh. The Penn State product is raw, but has the potential to be a double-digit sack player at his peak.

Lukas’s pick: Jaelan Phillips, EDGE Miami (FL) — The Ravens need a pass rusher after losing two of their top defensive ends in free agency this offseason. Phillips is an interesting story, as he briefly retired from football due to a concussion before coming to Miami in 2020.

Jack M’s pick: Trevon Moehrig, Safety (S), TCU — Tampa Bay could use another talent in the secondary, and Moehrig is the best player available at the end of the first round. This pick is a match made in heaven for both parties. 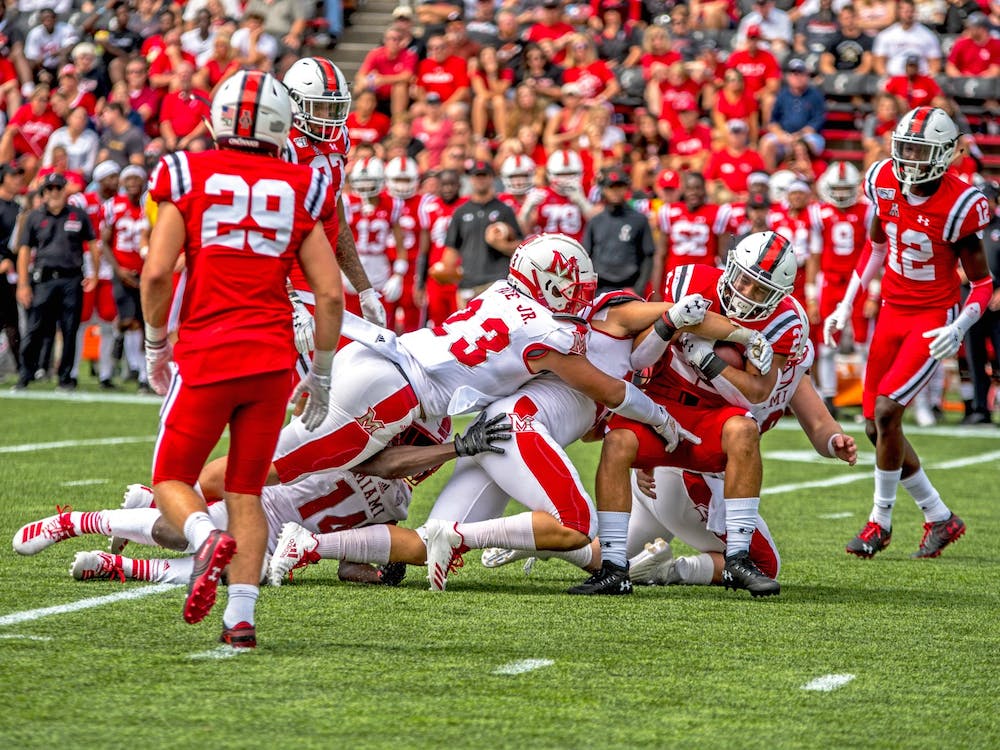 It ’s time we accepted that schools outside out of the Power Five (P5) conferences don’t have a chance at winning a national championship, and – with the ever-increasing trend of high-profile players opting out of bowl games in favor of preparing for the NFL – it’s time we made the postseason serious for Group of Five (G5) schools.

All 32 NFL teams in attendance for Miami football pro day

All 32 NFL teams were in attendance Monday for Miami football’s pro day.