It was 8 a.m. on March 19, when junior computer science and games and simulation double major J Scherrer and his friends called the Darke County General Health District, almost an hour away, hoping to schedule a COVID-19 vaccination from one of the county's leftover doses.

Later that day, five of them would find themselves piling into cars on what Scherrer called "a bit of an adventure” to a county they had never even heard of two days before.

"When the chance opportunity to get vaccinated in this random county popped up, I jumped on it because I didn't know when the next opportunity would show up," Scherrer said.

Scherrer heard about the county's surplus of vaccines from a friend in Miami's Glee Club and saw it as his best bet to get vaccinated before the end of the semester, when he would go back home to Chicago.

Due to the long waiting periods between doses of Moderna and Pfizer vaccines and the lack of access to single-dose options, Assistant Vice President of Student Life for Health and Wellness Steve Large wrote that it's unlikely Miami University will be vaccinating its entire student body.

"Because we will not be able to distribute two doses before the end of the semester, we are not able to open the vaccination clinics to our general student body at this time," Large wrote in an email to The Miami Student. "If we receive a supply of the single-dose Johnson & Johnson vaccine, we will make that available to our student population."

Miami has been working with state officials to vaccinate students but hasn’t had much luck, Large wrote.

"There have been recent conversations at the state level to encourage allocating doses of the Johnson & Johnson vaccine to institutions of higher education given their single administration and hope to vaccinate students prior to leaving their respective campuses," Large wrote. "However, no decision has been made."

On trend with the university’s vaccination system, the City of Oxford has struggled to provide vaccines for even high-risk citizens.

Oxford City Council has worked to connect residents with opportunities to receive the vaccine. Their focus, however, has been less on vaccinating residents in Oxford than transporting residents to other towns to get vaccinated.

“We were able to collaborate with Oxford Senior Center and Butler County Regional Transit in order to provide older residents with transportation to get vaccinated,” Smith said. “Even if they don’t have access to the internet or have a consistent address, we’re able to get them registered and taken to a vaccination spot.”

Scherrer said Miami is doing a good job of communicating what it does and doesn't know about vaccination.

"I feel like [administrators are] communicating about as much as they know to us," Scherrer said. "The vibe that I get from their communications is that they don't really know when vaccines are going to be available, or what their exact plan will be … If that's the message they're trying to communicate, I think that they're doing it excellently."

Two other students went with Scherrer on the hour-long drive to Darke County: first-year biology major Bethany James and sophomore psychology major Abi Meikle, neither of whom expected to be vaccinated before the end of the semester.

"Twenty-four hours before, I had no notion of getting vaccinated any time soon, but then I heard about this place super late the night before, and we all made a plan to get up at 8:00 [a.m.] when they opened and try to call to make ourselves appointments," Meikle said. "It was all very hectic."

Because of her doubts, Meikle was eager to get a vaccine from wherever she could.

"I didn't think the school would have vaccines in time to vaccinate everyone this semester," Meikle said. "Even if they did get vaccines, I'm not in any particular risk, so I probably wouldn't be the first to get it."

James said she would have preferred the Johnson & Johnson shot because it was single-dose but was willing to take whatever she could get.

"I didn't really want the Moderna shot, but that's the one that was available, so I went with it anyway," James said. "Even if you can't get your preferred vaccine, unless there's a very serious reason why you have a preferred vaccine, just get the vaccine you can get." 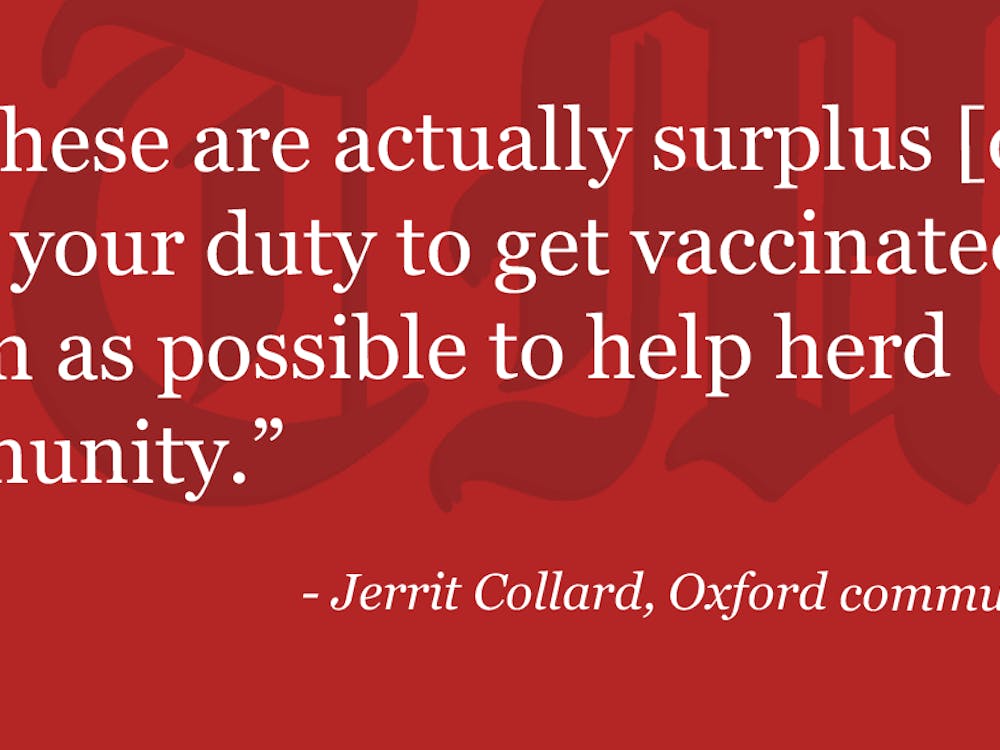