The results were rarely there this year for Miami hockey. The team finished 5-17-2, last in the National Collegiate Hockey Conference (NCHC).

Despite this, the team showed promise, getting marked contributions from young players, and often playing close games against top teams in the country.

The RedHawks season started with ten games in Omaha, Nebraska in a bubble-like environment.

The young squad wasn’t able to play non-conference games due to the pandemic. It was evident that the RedHawks were hurt by the lack of tune-up matchups, especially early in the season, when they only scored 14 goals in their ten games in Omaha.

The team won two games in the bubble, beating Omaha — ranked 18th in the country at the time — and an eighth ranked Denver squad five days later. Miami also tied Colorado college 1-1, and lost to Omaha in overtime before leaving Nebraska.

The RedHawks came out of Omaha on fire. After leaving the site, they traveled to Western Michigan, and ripped off the series sweep, beating the Broncos 3-1 and 5-1.

The next weekend, The Broncos traveled to Oxford, and got revenge — beating Miami 4-1 on Saturday before the teams tied 3-3 on Sunday.

After that series, the RedHawks won just one game for the rest of the year. After two straight losses to No. 6 St Cloud State, the RedHawks were swept in two consecutive series vs. Minnesota-Duluth, even losing 8-1 in one particularly ugly contest in Minnesota.

The next weekend, Miami broke the losing streak, beating No. 8 St. Cloud state 3-2 in Oxford. The next night, the RedHawks fell 4-2. In the final regular season series of the year, Miami lost to Western Michigan twice, 5-2 and 4-2.

In the team’s only playoff game, they fell to the NCHC’s No.1 seed, and the No. 2 team in the country, North Dakota.

Despite this team’s lack of success, RedHawk fans should be excited about what they saw from some of the team's young players.

Freshman Matthew Barbolini, for instance, led the team with five goals, and added nine assists in 25 games. Freshman Robby Drazner was also excellent. He chipped in seven points on the year and exemplifies the qualities desired in a modern defenseman: speed and passing ability.

Ludvig Persson, also a freshman and arguably the team’s best player, looks like a star in the making. The Swede finished the season with a 92.5% save percentage and was nominated for the Hoby Baker award (the prize given to Division I hockey’s best player).

Matt Barry, the team leader in points, returns in 2021-22, along with defenseman Derek Daschke who finished the season with 12 points in 25 games and led the team in shots on goal.

For recruits, the team brings in Red Savage, a 17-year-old forward whose father played at Miami. Red’s brother, Ryan, also just finished his sophomore season with the RedHawks.

Savage scored 32 points in 35 games in 2020-21 with the United States national U18 team, playing a year above his eligibility. He’s expected to be selected in the first three rounds of this year’s National Hockey League (NHL) draft.

Other notable recruits include Paul Fletcher, a 19-year-old forward who put up 23 points in 31 games this season for the Dubuque fighting saints of the United States Hockey League (USHL); Valentino Passarelli, who scored 18 points in 27 games this year in the North American Hockey League (NAHL); and Kienan Draper, a 2020 Detroit Red Wings draft pick.

Head coach Chris Bergeron, entering his third season, will have his third full recruiting class coming in — one group of players closer to implementing the hard-nosed culture he talks about so often, and  was the trademark of his successful Bowling Green teams.

The schedule for next season hasn’t been released yet, but RedHawk fans can expect the announcement to come later this spring. 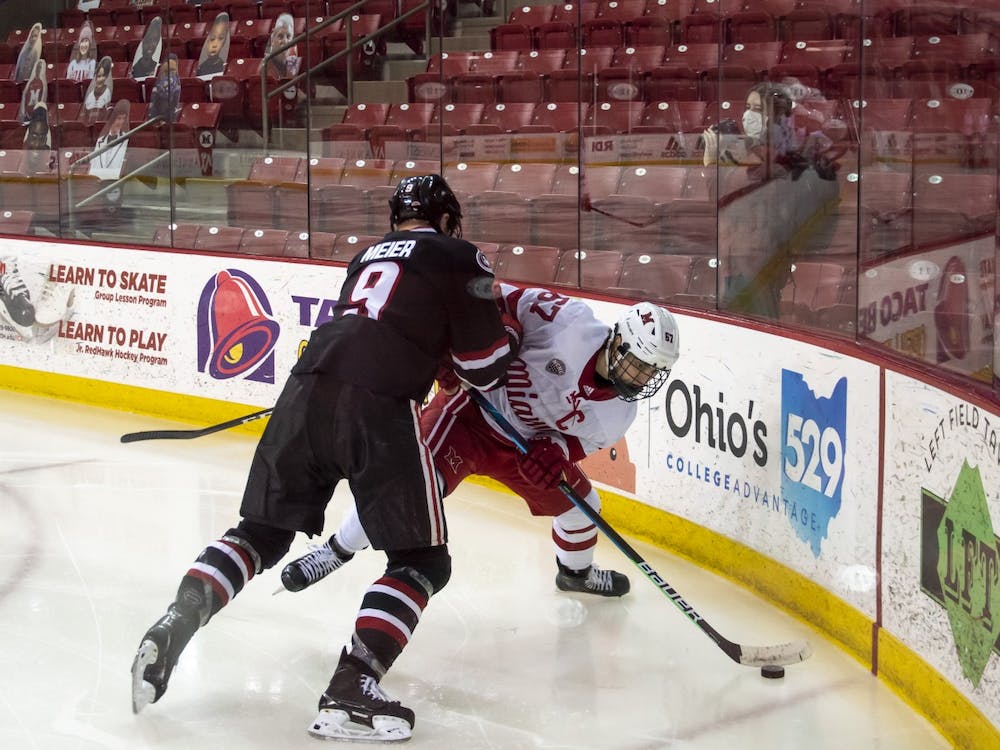 Hockey to play No. 1 North Dakota in conference quarterfinals

Miami plays the University of North Dakota, Friday, March 13, at 7:37 p.m. in the NCHC quarterfinals. The RedHawks have a tough task ahead. North Dakota is currently ranked No. 1 in both the NCHC and the country, and rosters 12 National Hockey League (NHL) draft picks.