What’s a household to do on another long quarantined day when TV, video games and Uno just aren’t cutting it anymore?

Well, if you happen to be my two roommates and me, and you happen to have just gone shopping and have a full kitchen, and you happen to be starved for novelty, then you just might play a DIY, homemade version of the Food Network’s hit show “Chopped.” The premise: Contestants must combine three ingredients of the judge’s choosing into a single dish within a time limit. The winner of the most rounds takes it all.

One of my roommates took the role of our judge, henceforth referred to as Dalton Beige, Alton Brown’s long-lost cousin. (Note: Alton Brown, turns out, is not the host of “Chopped.” Ted Allen is. We did not realize this at the time.) My other roommate and I donned our dollar-store chef’s toques and took to the kitchen.

Who would end up Scuffed?

Fifteen minutes is not long enough, especially when you spend the first two minutes scrabbling for an idea. When watching “Chopped,” I’m always amazed at how quickly the contestants come up with something to make, but now I understand — it’s sink or swim, and you’ve just got to start making something.

While my roommate went to work doing something fancy with a tortilla, I hollowed out the caps of a few baby bella mushrooms and proceeded to stuff them with the turkey and some cheese. They would be nice baked, I thought, but I didn’t have that kind of time — the oven wasn’t even preheated. So instead, I brushed the tops with melted butter, some salt and a squeeze of lemon juice, and popped them in the toaster oven for an experimental amount of time.

Meanwhile, I chopped up the tomato with some green bell pepper and generous amounts of lemon juice into what might be tenuously called a salad, or perhaps the most mild salsa imaginable. The toaster oven dinged, and I narrowly avoided burning myself trying to get my little stuffed mushrooms out and onto the plate before time was up.

Both elements were good, Dalton Beige informed me at judging, but they seemed a little disconnected from each other. Besides, I had to admit, my roommate’s intricately rolled wrap did get points for style. Round one went to her, and I was on the back foot.

Time for the main course.

First round was just a warm-up, I told myself. This time, I had a vision.

First thing’s first: Boil the rice. Cook the chicken. Two easy decisions. But what to do with the jam?

Inspiration struck: I’d temper the sweetness and make a sauce by reducing it with red wine. Then, accentuate the fruity notes by tossing in some chopped apple and give it some green with asparagus. Judges on “Chopped” loved wacky combinations like that! Well, sometimes.

Assuming my roommate would also be boiling the rice, I offered to add her portion to the pot with mine.

I blinked, taken aback. I hadn’t even considered doing something like that. Should I season the rice as well? Would it be too boring to use as it was? Not transformative enough?

But no, I told myself. Best not to let it get too busy. Sometimes less is more.

Twenty minutes later, I poured my stir-fry mixture over the rice and set it down before the judge.

That was true. Cooking all the ingredients in the jam-wine sauce did make for a rather monochromatic experience. But I stood by the flavor, and in the end, I won the round over my roommate’s own version of stir-fry.

This was it. I was hitting my stride. Victory was within reach. All I had to do was not stumble at the finish line: the fickle, unpredictable final course.

“I’m honestly just curious to see what you do with the Starbursts,” Dalton Beige said, knowing exactly what a difficult combination he’d presented us with.

My competitor had me immediately rattled when she grabbed a bag of marshmallows and calmly set to work, while my mind spun in blank circles. Not really knowing what else to do, I threw a couple of pink Starbursts over medium heat on the stove, hoping a good idea would come to me in the meantime.

I was somewhat surprised to see the candy did, indeed, melt, though soon it started to bubble and smoke. Going off intuition, I splashed some heavy cream in the pan and lowered the heat to stop it from burning. I left it to simmer and went to smash up the other required ingredients together with a heavy dash of cinnamon and cloves. After a few minutes I returned to the stove.

The Starbursts had dissolved in the cream well enough, but the color was somewhat akin to if a small child had drank some Pepto Bismol and vomited in the pan. Still, it tasted surprisingly good, and a few drops of red food coloring made it look somewhat more palatable. This, I concluded, was a workable dipping sauce.

With time running out, I sliced up some more apple, poured melted butter in my granola-cereal mixture, recklessly shellacked it onto one end of the apple slices and popped it all in the toaster oven. When it finished with a ding, I dipped the other end of the slices into the Starburst sauce and plated it all with sweat on my brow.

“I’ve made you a double-dipped baked apple,” I told Dalton Beige at the judging moments afterward, feeling in that moment a certain kinship with every “Chopped” competitor that had to make something up on the spot.

In the end, though, my dessert was not enough to best my roommate’s (very elastic) marshmallow-cherry Starburst tart, and the hand-drawn winner’s certificate went to her. The punishment — “SCUFFED” written in temporary tattoo ink — went to me.

Well, you can’t win them all, I guess. And anyway, at least another evening of boredom had been averted, and that night we feasted on plentiful mini servings of our own strange cooking. 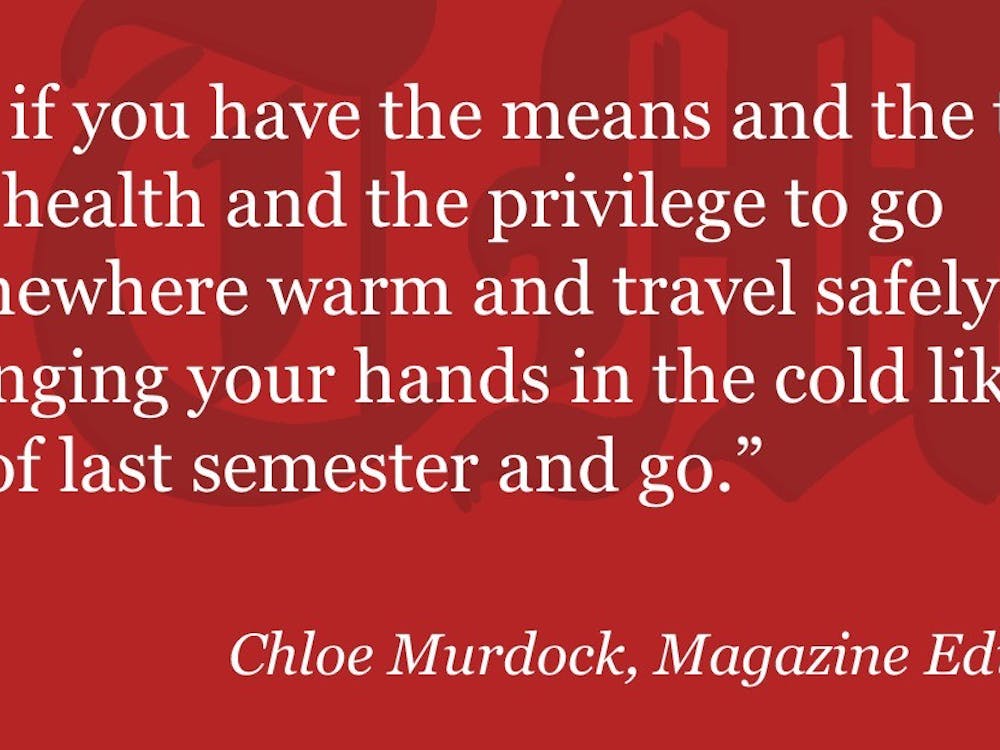 Masks on the beach: Take a break — without endangering yourself or others

So if you have the means and the time and the health and the privilege to go somewhere warm and travel safely, stop wringing your hands in the cold like I did all of last semester and go.