With St. Cloud State leading Miami 1-0 about 10 minutes into the third period on Friday, the real action started.

To start the scoring for the RedHawks, sophomore defenseman Alec Capstick found the back of the net off a feed from freshman star Matthew Barbolini to make the score 1-1.

Before the small crowd of friends and family had even returned to its seats after celebrating Capstick’s goal, the RedHawks took their first lead of the game.

Just 13 seconds after Capstick scored, junior forward Scott Corbett fired a shot on net that St. Cloud goalie David Hrennak stopped but couldn’t corral. Sophomore John Sladic streaked in to find the rebound and slipped it past Hrenak to make the score 2-1 Miami.

Ten seconds later when the Huskies scored their second goal of the game, it was almost as if the RedHawks had forgotten that there were still 10 minutes left in the third period.

The three goals all came within 23 seconds of game time. When Krannila scored the Huskies’ second goal of the game, Steve “Coach” Cady Arena public address announcer Scott Shriver hadn’t yet had a chance to report the first Miami goal.

Two minutes later, senior St. Cloud defenseman Seamus Donohue sent Miami junior Bray Crowder flying into the boards head-first. He was penalized for boarding and a roughing penalty was tacked on — to the chagrin of the St. Cloud bench — after a furious Brian Silver caromed into the scrum and tackled Donohue.

Just over 30 seconds into the RedHawks four-on-three powerplay (Silver was penalized, too), Barbolini took a pass from senior defenseman Derek Daschke and slid it over to senior center Casey Gilling who fired a wrist shot past Hrenak for Miami’s third goal of the night.

That’s where the score would stay.

The story of the night for the RedHawks would be the offensive onslaught in the third period, but Friday's game was truly a team win.

Another excellent performance in net from Persson, who saved 36-of-38 St. Cloud shots, kept Miami in the game all night, and Miami’s penalty kill was immaculate. The RedHawks held St. Cloud’s power play — ranked sixth in the country — to zero goals on five attempts.

The victory broke a six-game losing streak and was Miami’s first since Jan. 3.

The RedHawks struck first in the second game. Eleven minutes into the first period, junior forward Matt Berry collected a pass from Daschke on the power play and crossed it over to a crashing Barbolini. Barbolini did the rest of the work, slinging it past Hrennak for his third point of the weekend.

After a battle behind Miami’s net, the puck ambled off RedHawk sophomore Jack Clement’s stick and found its way to the front of the net. St. Cloud senior Easton Brodzinski found the loose puck and smacked it past senior goaltender Grant Valentine to tie the game.

Miami retook the lead with just seven seconds remaining in the first period when junior forward Jack Olmstead secured a pass from Barry and dropped it to freshman defenseman Dylan Moulton coming into the zone. Moulton bolted toward the St. Cloud net and fired a shot that Hrenak stopped but couldn’t freeze. Moulton found his own rebound and wrapped the puck around the cage for the tie-breaking score and his first collegiate goal.

The score stayed 2-1 Miami until about five minutes into the third period. Once again, the Huskies scored two goals in rapid succession — this time eight seconds apart — to take their first lead of the game.

With about two minutes left in the game, Miami pulled Valentine to send an extra skater onto the ice. The RedHawks couldn’t convert with an extra man, and with just over a minute left, Fitzgerald scored the final goal of the game, sending a wobbling shot into Miami’s empty net from just beyond half-ice.

Valentine did his best Persson impression in his first action of the season. The senior stopped 28 of the 31 shots he faced and gave Miami a chance to finish the weekend sweep against the sixth-best team in the country.

The RedHawks were again sensational against an explosive St. Cloud power play, holding them to zero goals on four chances, making the Huskies 0-of-9 on the weekend.

Bergeron was impressed with the effort.

“We're finding a new level of competition. Period,” he said. “And that’s something that we’re proud of.”

The RedHawks hit the ice next against Western Michigan for the final two games of their regular season. Miami faces off against the Broncos in Kalamazoo at 7:05 p.m. Friday, Feb. 26, and 2 p.m. at Steve “Coach” Cady Arena Sunday Feb. 28. 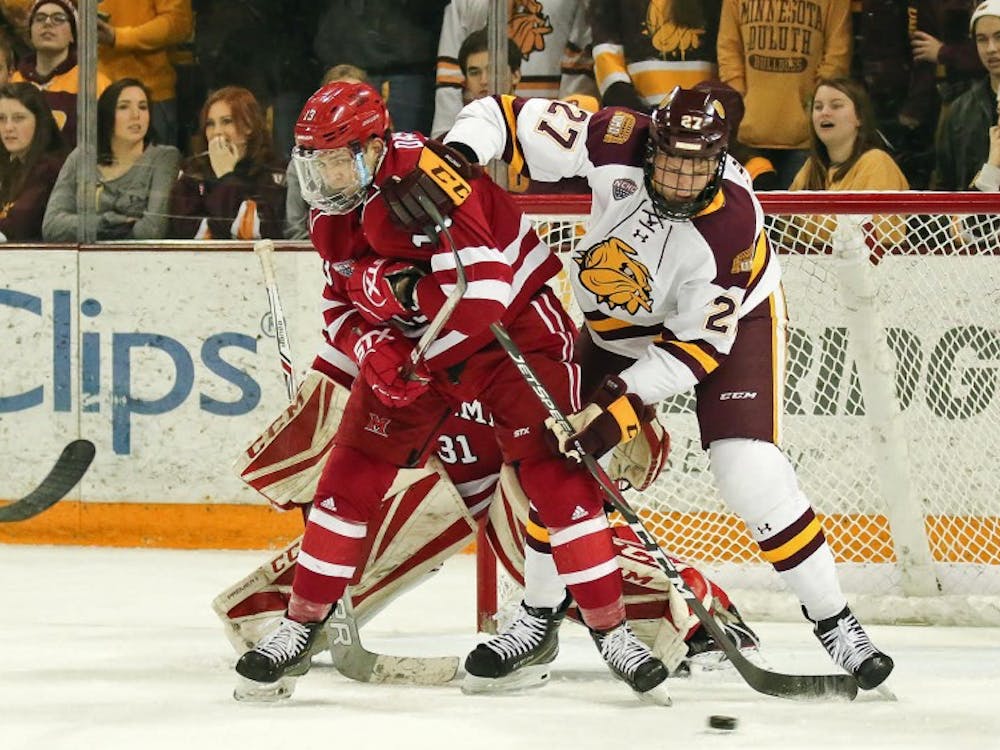 The Miami RedHawks traveled to Minnesota this weekend looking for retribution again against a Duluth team that beat them twice in Oxford last week.  They didn’t get it.  The RedHawks lost 8-1 Friday night and 3-1 Saturday to a Duluth team that boasts eight National Hockey League (NHL) draft picks and is currently ranked fifth in the country.  The team will look to bounce back next weekend against fourth-ranked St. Cloud State at home in Oxford before finishing the season with a home-and-home series against Western Michigan.