In the first round of the Mid-American Conference Tournament last week, the RedHawks pulled out a massive upset of the defending champion Buffalo Bulls, thanks in large part to junior guard Nike Sibande’s career night. Miami then moved onto Cleveland to play another superior opponent it had upset earlier in the season, the Northern Illinois Huskies. With the big win and another upset potentially lined up, nothing seemed impossible for this team.

Several conferences and eventually the whole NCAA decided to shut ’er down for the foreseeable future and, just like that, the first round win that seemed like a telling of things to come meant next to nothing. The RedHawks’ season was finished — a potential Cinderella story gone by the wayside — and now all we can do is wonder what might have been.

The game against the Bulls suddenly showed fans what they had longed for all year: a team with a winning mentality.

This all came after a bitter loss to close the regular season against the Bobcats of Ohio, when Bam Bowman’s senior night was spoiled by a two-point loss and his missed game-winner.

There is, however, no doubt that the second showing in the Battle of the Bricks was better than the disgusting display the team put on in Athens back in February (if you didn’t catch that game on CBS, count your blessings. Miami scored 11 points and shot 10 percent from the field in the first half). That game was the bottoming-out of the season, and there was nowhere to go but up.

After one of the worst displays put on in the MAC in recent history (an announcer’s words, not mine), there was change, and Miami carried a new confidence. The victories weren’t quite there, but anyone who watched the games noticed the RedHawks looked competent.

Miami ended up 3-5 after that first Ohio game, including a great win over the MAC West-leading Huskies and a back-alley butt-kicking of the second-place Bowling Green Falcons to close out February. The 5-13 conference finish wasn’t sexy, but at least momentum hadn’t left the ’Hawks for dead.

Thank God, because January was tough to get through for reporters and fans alike. The close losses made me want to just put my head in my hands. Once the 19-point romping by Akron came before spring classes resumed, I was numb to irritation.

Let’s hand out some awards.

Sibande had a bit of an off year, but there is no question that he is this team’s top performer. His athleticism was largely unmatched (48.5-inch vertical), and he picked up his effort in other areas outside of the offense. Diving for loose balls, getting his hands in passing lanes and picking up his field goal percentage showed a rise in awareness, even if a few of his offensive statistics took a hit. I believe Sibande will come back for his senior season, and I can’t wait to see what he does next.

OK, hear me out here.

While he doesn’t always look like the most talented guy on the court, McNamara’s effort looked better almost every game. Owens also noticed his work ethic outside of practice and even had him starting in front of senior Bam Bowman on several occasions. Weirder still were the times when McNamara, who only averaged 4.5 points per game this year, looked like the offensive firestarter. Nearly every game late in the season, the big man from Pickerington chucked up seven or ten points in the first five minutes like no one could stop him. If there was some way he (or the rest of his team) could harness that energy for an entire game, watch out. His work in the post took a big leap, as did his defensive awareness. The man looked to block shots on the regular, and I loved it.

Best moment of the season: Sibande leads ’Hawks to Cleveland

I was between this entire performance or the second dunk Sibande put down against the Falcons on Feb. 29. This takes the cake because the junior guard put the team on his back and put on his greatest showing in the first round. Big-time players make big-time plays.

Owens has one more year on his current contract, and the Buffalo game just might have saved him from getting the pink slip this year. With Sibande and forward Dalonte Brown becoming seniors in the fall, next season might be do-or-die for Owens to get the RedHawks into contention in the MAC. 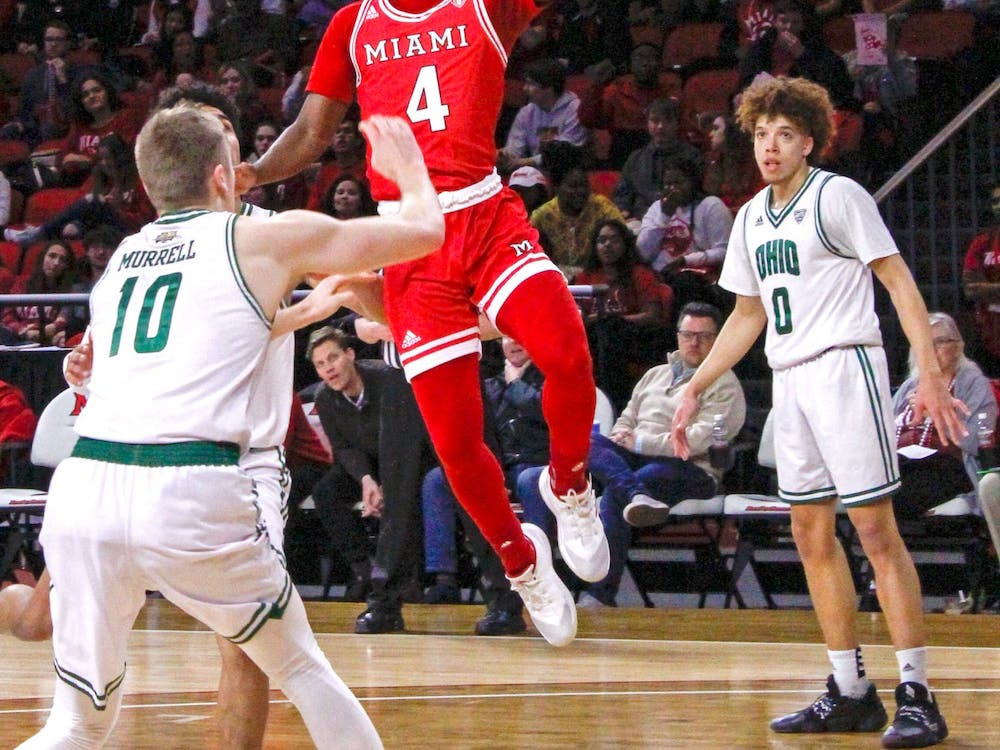 Monday night in Buffalo, Miami was the disruptive underdog.