With Farmer School of Business (FSB) dean Marc Rubin stepping down this semester, the search process for a new dean is underway.

The search committee, chaired by College of Creative Arts Dean Liz Mullinix, is composed of 11 other members. These members include professors from a variety of FSB departments, a graduate student, an undergraduate student and a member of the FSB Business Advisory Council, which is a group made up of Miami alumni who currently work in various business-related fields.

Mullinix could not be reached for comment. But senior Collin O’Sullivan, the only undergraduate student on the committee, said he hopes to see a dean with “growth [and] great representation.”

Although the committee has not released a timeframe on when they expect to choose a dean, O’Sullivan said they are hoping to come to a decision between all four candidates before this semester ends.

Jenny Darroch describes herself as energized in front of students. She holds herself to a philosophy of working toward the best outcome for each student.

Darroch has a doctorate in marketing from the University of Otago, New Zealand and currently serves as dean of the Peter F. Drucker and Masatoshi Ito Graduate School of Management, part of Claremont Graduate University in California. She has worked at Claremont in various positions since immigrating to the United States from New Zealand, where she used to lecture at several universities.

She said she was drawn to the “greatness” of Miami University, but feels that FSB needs to be more prominent or “pop up” in the market.

“For an incoming dean who loves a bit of a challenge … I think it’s a really great opportunity,” Darroch said.

In order to “pop up” in the market, Darroch believes FSB needs to start with alumni engagement.

Darroch also plans to listen to students and continue to work on increasing diversity. As an immigrant woman (who was once told by a colleague that they wished she came with subtitles), she feels strongly about equal opportunity.

“I just don’t like injustice,” she said. Although she admitted that Claremont doesn’t struggle with diversity issues as much as Miami does, she believes she still has experience that will help address the problems within FSB. Darroch is currently serving as chair of Women Administrators in Management Education (WAME). She also plans to use mentorships to bridge diversity gaps.

Ultimately, Darroch wants to work with students and faculty to best serve the school. Miami, she believes, is a great school. However, FSB needs to continue to stay ahead of the curve and cannot become lazy in its success. The key to this, she said, is to watch and listen to the problems.

Barnali Gupta is the only candidate currently employed at Miami. Barnali has spent 26 years at the university as an assistant professor and professor of economics. She currently serves as assistant dean of curriculum in FSB.

Her first priority, if appointed to the position, is making FSB a “destination undergrad institute.”

She also wants to focus on building “niche graduate programs” that are “tailored to the interest of specific majors.” Gupta said she understood that although FSB will always be more undergrad-focused, building programs for graduate students would be high on her itinerary.

She said another priority is building an inclusive environment for everyone.

“Not only is it important to build an inclusive environment, but an environment in which every member is empowered,” Gupta said.

She wants to ensure that everyone in FSB has the resources to succeed as a team. Gupta mentioned utilizing technology such as virtual reality, augmented reality and virtual classrooms.

Although Gupta is the only candidate without prior dean experience, she expressed confidence in her knowledge of Miami.

“I know the culture, the education, and I am excited to build upon existing knowledge,” she said.

Gupta added it’s necessary to not let her experience at Miami go to her head.

“My biggest challenge, however, is [my] assumption I know more than I actually do,” she said.

“You always look for pillars of strength when you look at business schools, and it’s so exciting for me to be back at an institution where one of the pillars is entrepreneurship,” Sharpe said.

Sharpe, an alumna of Mount Holyoke College, earned her doctorate in systems engineering from the University of Virginia. Her first position out of school was as an assistant professor of mathematics at Bowdoin College in 1989.

She went on to teach statistics and operations at Babson College until 2009, when she became the senior associate dean at the McDonough School of Business at Georgetown University.

Sharpe then came to St. John’s University, where she currently serves as the dean at The Peter J. Tobin College of Business and manages all financial, strategic and academic duties. She is also the author of the “Business Statistics” textbook commonly used by many Miami students.

If chosen as dean, Sharpe expressed her strong interest in expanding and intensifying the digital marketing of FSB to attract more students from around the country, particularly from areas where Miami wouldn’t be as familiar as other colleges.

“There’s a lot of online tactics that we can use for marketing, and I would look to millenials and the younger generation to help us — and one way to do that is by setting focus groups,” Sharpe said.

Sharpe additionally hopes to strengthen the sales and analytics programs at FSB and add an intensive cybersecurity program.

Sharpe stressed her support for a broader kind of diversity within FSB.

Ultimately, Sharpe was clear as to why she believed that she could make a difference at Miami:

David Urban pointed out that his candidacy for the dean of FSB coincides with interesting times at Miami due to the recent change in the upper-level administration.

“The president has been around for four years, the provost less than one. There is a need for a strong foundation for administration,” Urban said.

Urban received his doctorate in business administration from the University of Michigan in 1985. He has spent over six years as the dean of Jones College of Business at Middle Tennessee State University (MTSU).

Urban expressed his belief in student-focused leadership to sustain student groups. He spoke on his weekly interactions with business students from MTSU’s football team in which they reviewed their academic progress. He said that he was able to better understand the needs of student athletes afterwards.

Urban said that the school needs to add value to its strengths.

“We need to increase the internship and job placements while also providing more certifications so that students can prove their strength,” he said. He also said that he intends to utilize the “alumni hot-pockets” to draw funds as well as strengthen networking to increase job opportunities.

Urban stressed that students should be equipped with the skills to face real life after college.

“In the end, knowledge and experience are important,” he said. “The school needs to impart those soft skills through engaging classrooms, internship opportunities and study abroad programs.”

He said that the 60 percent student involvement in study abroad programs needs to be improved.

Urban said the “public ivy” label of Miami made the university an attractive venture for him and that the opportunity at Miami, though similar in many aspects to his current job at MTSU, is a level up for him. He claims that he would be the dean to convert the FSB into a transformative experience for students. 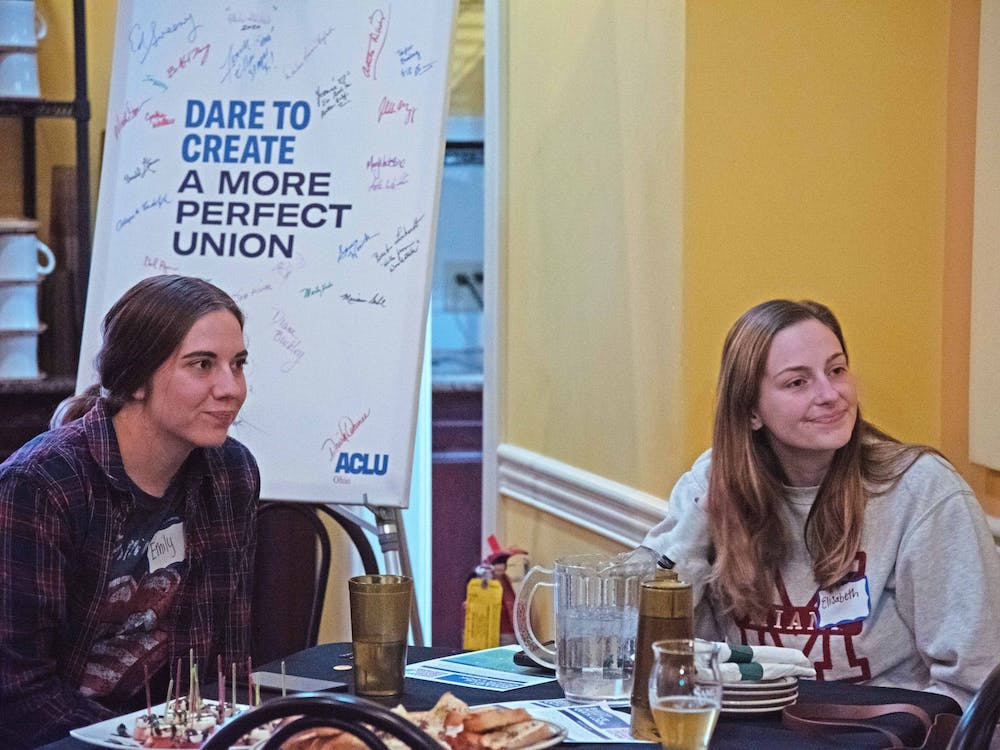 Around 20 people of all ages congregate in a small room in Cru Gastro Lounge. They sip drinks from the bar, feast on hors d'oeuvres and chat. A small screen in the corner of the room cycles through advertisements for American Civil Liberties Union (ACLU) initiatives