Chief Douglas Lankford of the Miami Tribe of Oklahoma took the stage of the tribe’s newly renovated Council House and called for two people to join him: Myrtis Powell and Bobbe Burke.

The two women have long had a relationship with the tribe, and on Friday, Jan. 24, they were thanked for their roles in connecting the tribe and Miami University, which had long gone unassociated until 1972, when the tribe’s chief at the time visited Miami unexpectedly.

The thank you was especially heartfelt for Burke, who retired from her position as Coordinator of Miami Tribe Relations at the Myaamia Center — the heart of Miami’s relationship with the tribe.

In the years following, Burke coordinated projects about the tribe and for the students, which led to her learning about the history and culture of the Myaamia and other Native American peoples, an interest that deepened the more she worked with the tribe.

Powell retired in 2002, and Burke continued to grow more invested in the university and tribe’s relationship. In 1994, she became the Coordinator of Miami Tribe Relations, the title she held until her retirement at the beginning of 2020.

“It’s been a wonderful educational trip for me,” Burke said. “I don’t think I could have told you one significant thing that happened to American Indians when I first started this.”

Burke has witnessed firsthand how the Myaamia Center has grown and strengthened, especially in bringing Myaamia students together. They don’t just show up to their Myaamia classes; they socialize and form friendships, and many come to the Winter Gathering, an event that brings members of the tribe together in Miami, Oklahoma each January.

After working closely with tribe members at the Myaamia Center like Daryl Baldwin and George Ironstrack and attending the Winter Gathering many times, Burke formed close friendships with many in the tribe. In 2005, she was even made an honorary member. Burke said she’s grounded by the students and hopes to maintain connections with them in the future.

“I hope and feel that I will always be welcome here,” she said.

Strass grew up near Fort Wayne, Indiana, where many myaamiaki, Myaamia people, live. The capital of the Myaamia Nation before removal, it is the second-largest population center of the tribe besides Miami, Oklahoma, the current capital. Her family has always been deeply involved with the tribe, and she has worked at the Myaamia Center since 2015, while studying as a graduate student at the university.

To Strass, some of the Myaamia students she works with are family — literally.

“I’m related to students,” she said. “That [relationship] is unique.”

Being a part of the tribe gives Strass an entirely different perspective on her position. She puts a greater focus on the cultural aspects of the tribe and can relate to the Myaamia students differently than Burke.

Burke helped establish relationships between the tribe and the university in areas like student affairs and athletics. Strass hopes to extend those relationships until every student who comes to Miami knows about the tribe and how it is connected to the university. From the tribe’s perspective, Strass hopes to increase opportunities for the Myaamia students to practice their culture, like ribbonwork and traditional stomp dancing.

“It’s a job that’s both personally and professionally fulfilling,” she said.

Burke’s breadth of institutional knowledge is something Strass admires about her former boss and hopes to emulate.

Burke worked with Strass for several years at the Myaamia Center and is happy to see her take on such an important role, even as she reflects, nostalgically, about stepping down.

“It’s hard because I’ve always been a worker,” Burke said, “but I am definitely not worried … I can’t say enough about how lucky the Miami Tribe is that [Strass is] interested in doing this work.”

As Strass helps take the Myaamia Center into the future, she has plans to more fully weave the relationship with the Miami Tribe into the fabric of Miami University. 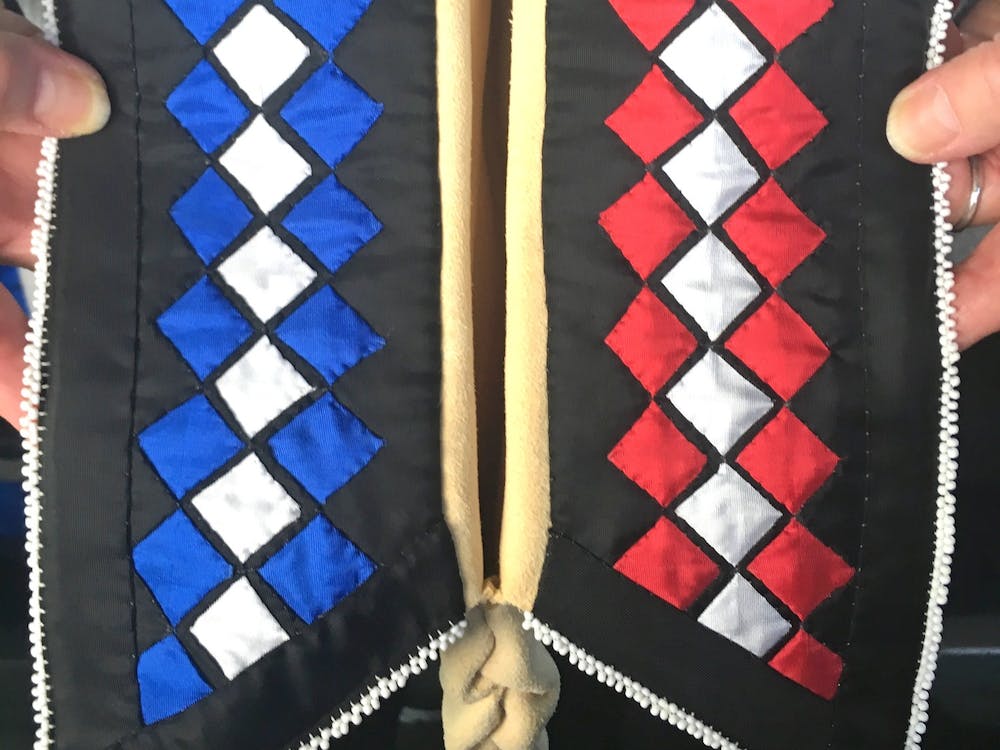