Before there were safety bulletins, there was silence

Content Warning: This article contains information about a sexual assault that may be upsetting to some readers.

In 1965, Susan Fleming Morgans came to Miami University from Mt. Lebanon, a suburb of Pittsburgh.

She loved living on South Quad. She loved walking around campus past the sundial. She remembers Uptown as quaint and bustling. She remembers how boys would wear jackets and ties and  walk to pick up their dates to football games because hardly anyone had a car.

She remembers how during her freshman year, women wore pleated skirts, flat shoes and sweaters, and men wore button-down collared shirts and khakis. By her senior year, students were wearing bell-bottoms and long stringy hair.

She remembers how her parents sent her to college in Oxford because they believed it was safe.

And for her first three years, she did too.

Susan lived in Dodds, Richards and Hamilton Hall during her first three years at Miami. Her final year was the first that senior women could live off campus, so she moved to a house on 122 N. Main Street with five other women.

Susan always knew she wanted to be a journalist and began working at The Miami Student (TMS) as a freshman. She was best known for her opinion columns and says the bravest thing she ever did during her time on staff was run a copy of a Vietnam draft notice on the editorial page because someone dared her to.

During her senior year, on a cold October night, she covered a student government meeting for the newspaper. The Dean of Men and Dean of Women (there were separate deans for men and women at the time) were present. Susan thinks the meeting was in Laws Hall, but she can’t be certain.

“I never felt, for a second, afraid at all, about anything,” she said. “Miami, I thought, was safe.”

She walked down Main Street, past the bars, and turned the corner. Her house was in sight when she saw three men approaching her.

After walking past her, the men grabbed her from behind and dragged her into the backyard next to her house. One of the men struck her diaphragm so she couldn’t scream. She saw another holding something shiny, which she believes was a knife.

One of the three men held her down, while at least two of them raped her.

“Once they were gone,” Susan said, “I remember saying to the guy that was holding me down, ‘Why did you do this to me? I never did anything to you.’”

Before he ran away, the man who held her down ordered her to stay where she was for 15 minutes or they’d come back and kill her.

Susan stayed in that spot for about five minutes before running to her house. She banged on the door until one of her roommates opened it. Susan fell to the ground, sobbing and screaming.

Her roommate called the Oxford Police Department and took her to McCullough-Hyde, but they wouldn’t see her, saying she had to go to the campus medical center. At the Student Health Services, doctors confirmed there was damage and gave her the morning-after pill.

In the 60s, there were no rape kits or DNA tests — only the victim’s recount of what happened.

Doctors asked Susan if she’d call her parents, but she refused, too ashamed to tell them. So the doctors called them instead.

The next day, her parents picked her up and took her home to Pittsburgh for a few days, asking if she’d see a therapist or a pastor. She said no to both, and her parents said they wouldn’t be telling anyone in the family about what had happened.

“I think that honestly that was the era where people thought like, ‘Maybe men will think she’s damaged goods,’” Susan said.

Her parents’ decision to stay silent only made her feel worse.

At some point after the incident, the Dean of Women visited her and said, “Oh Susie, when I saw you coming into that meeting that night in your cute little short skirt and boots…” and stopped.

When she returned to campus, Susan got the best grades she’d ever received, but she resigned from the newspaper. Being an editor meant regularly having to walk home late at night.

There was no email at the time, let alone safety bulletins sent to the entire campus, but The Oxford Press reported on the rape, citing her age, school address and home state. They didn’t disclose her name, but they didn’t have to.

“It was interesting walking around campus,” she said, “because I knew everybody knew, but no one — very few people — would say anything or acknowledge it.”

Howie, an officer of student senate, was one of the very few people who did say something.

Susan has never forgotten that conversation.

After Susan’s experience, another girl came forward and reported a rape, setting off a panic that Oxford housed a serial rapist.

After thorough investigation, it turned out that the girl had had sex with her boyfriend and reported it as a rape out of fear of pregnancy. Susan worried the false report would cast a suspicious light upon her own story and that people wouldn’t believe her.

In an attempt to find her attackers, the Oxford Police Department had Susan look through Talawanda High School yearbooks to identify the rapists, but she knew she’d never be able to pick them out.

“I finally said to my dad, ‘Just tell them to drop it, I’m not going to press charges,’” she said. “And that’s how we left it.”

Susan graduated from Miami with a Bachelor of Arts in English in 1969.

Things have changed at Miami since then. Title IX wasn’t even passed until 1972, three years after Susan graduated.

In 1975, a ground-breaking book titled “Against Our Will” by Susan Brownmiller was published. The book changed the dialogue around rape culture and sexual assault, moving the narrative away from a male perspective to a female one.

“Women had never dared to talk openly about a crime against their physical integrity that often was met with disbelief and which carried a heavy load of shame,” she wrote in a preface published in 2013. “Rape was something that women were afraid to mention.”

The Jeanne Clery Act, passed in 1990, legally requires universities to distribute crime reports, so sexual assault reports are emailed to faculty, staff and students soon after they are filed.

Today, 50 years after Susan graduated, the entire Miami community receives an email when a sexual assault report comes in. Since the start of the fall semester, 32 reports have been filed (as of Nov. 4, 2019), and the victims are a lot more anonymous than Susan ever was.

The act also requires a list of safety tips, which typically reside at the bottom of the report, and include “if you see something, say something” and “please practice legal low-risk drinking” because “alcohol and other drugs lower inhibitions.”

“We want the safety tips to be helpful while trying to avoid victims feeling like they made mistakes,” John McCandless, Miami University Police Department (MUPD) Chief, said.

“Saying that alcohol increases perpetration completely neglects to think about the fact that many perpetrators are perpetrators before they drink,” Doepke said.

She’s spoken with several individuals including McCandless, Jane Goettsch in the Women’s Center and Dean Kimberly Moore, among others, about these initiatives to work to make the safety tips more purposeful.

MUPD doesn’t have an issue with changing the tips as long as they comply with Clery and are approved by the university.

The new safety tips are currently being drafted and have not been approved yet, but they will focus on a range of topics including “decoupling alcohol and consent,” defining sexual misconduct and rethinking conversations that normalize assault.

Most importantly, they will aim to make it clear that it’s never the victim’s fault.

Those who have experienced sexual assault or interpersonal violence have the option to meet with Miami Title IX coordinator Gabby Dralle, who offers a wide variety of resources from healthcare options to counseling.

“The meeting with me is not to go over the incident itself,” Dralle said. “They don’t have to share details about what’s happened. If they want to provide me with more information, they can, but it is not standard that they need to do that in order to receive access to resources or support.”

After receiving a three-year $300,000 grant from the Office on Violence Against Women, Miami formed a comprehensive community response team (CCRT), which includes 2o members, including Dralle, Rebecca Baudry Young, the director of the Office of Student Wellness, John Ward, the director of Student Counseling Services, and Dave King from OPD.

After graduation and a course in publishing at Radcliffe College, Susan moved to Washington D.C. She worked as a news aide for the Washington Post, sitting at a desk across from Carl Bernstein, one of the reporters who would later break Watergate.

After recognizing how the chain of command in journalism worked and realizing she wouldn’t be covering the Supreme Court anytime soon, she moved back to Pittsburgh and got a Master of Arts in teaching and taught high school for four years.

But after having a baby and quitting her job, Susan stayed home while her husband was a busy lawyer.

“This was the first time (this is 1975; the rape was in 1968) that I had had time to myself to think about what had happened—to let it filter through my brain,” she said.

Susan dealt with anxiety and obsessive-compulsive disorder and spent lots of time dismissing the severity of the rape, trying to convince herself that it hadn’t really hurt her. She didn’t receive any medication, but got some counseling and wrote for hours, just trying to come to terms with all of it.

“I kept those dozens and dozens and dozens of pieces of paper for probably 30 years,” Susan said. “And my husband and I burnt them in the fireplace probably ten years ago because we finally thought like, ‘Well it’s so long ago, and it’s over and our life is good.’”

It took her years to work through the situation, and even now, she acknowledges that life isn’t pretty. She hopes the men and women affected by sexual assault at Miami today seek out help and support.

“Everybody has terrible things happen to them,” she said, “and everybody needs someone to acknowledge it and to say to them, ‘I’m sorry that happened to you, I’d like to hear about it.’”

Susan worked as a Public Informations Officer editor in Mt. Lebanon, Pennsylvania for 22 years, and is married with one daughter, three step-children and seven grandchildren.

In October, she saw TMS’s Facebook post linking to the article about this year’s Clothesline Project, a display with shirts that give a voice to members of the Miami community affected by sexual assault and interpersonal violence. She left a comment asking for someone on TMS staff to make a shirt for her and briefly shared what happened to her in the fall of 1968.

“I am fine today - a mom, grandma and recently retired magazine editor - ” she wrote, “but you never forget!” 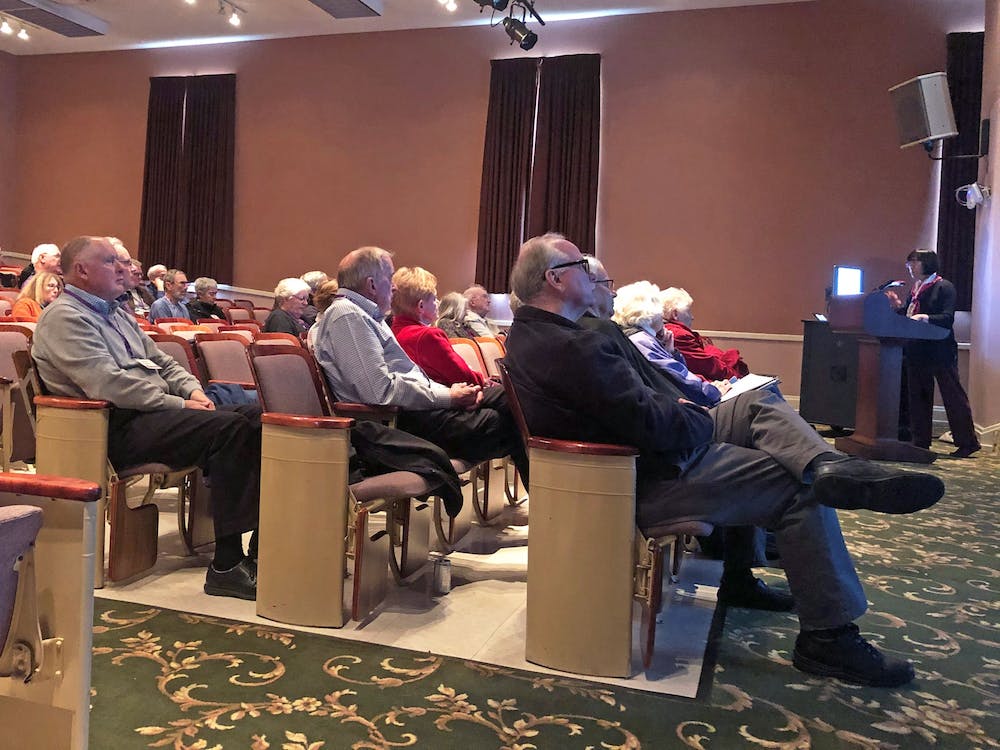