Miami hockey welcomed rival and two-time defending national champion Minnesota Duluth to Oxford this past weekend for a National Collegiate Hockey Conference series. Minnesota Duluth came into the weekend as the sixth best team in the nation. Miami entered off two tough road losses against the University of North Dakota, who was ranked tenth at the time.

Miami won, 3-2, Friday but fell short, 5-4, in a comeback attempt Saturday. Senior goaltender Ryan Larkin proved to be a standout in both games through his ability to make key saves at crucial points. Senior forward Karch Bachman was also a force to be reckoned with in both games. Bachman was a disruptor on the ice, something that does not always show on the stat sheet.

Friday’s game opened up right away, as both teams created decent chances early in the first period.

Larkin proved to be a wall in net for the RedHawks. His number was called throughout the first period to make key saves that helped Miami stay in the game. Larkin finished Game One of the series with 35 saves on 36 total shots.

The first game of this series ended as a 3-1 victory for the RedHawks.

After the victory Friday night, head coach Chris Bergeron acknowledged the different positive aspects of Miami’s team game. While he mentioned that he wanted the team to enjoy the victory, he did not want his players to take their foot off the gas.

“I thought our boys fought hard, and that is where we are going to have to start,” Bergeron said. “If you wanted to make a list of ‘no matter whats,’ we have to compete at that level no matter what, and that is just the way it has to be.”

The second game of the series began with plenty of physicality and scoring chances. Minnesota Duluth scored on a goal by junior forward Nick Swaney early in the first period.

Even though it trailed early, Miami continued to push the puck in transition and create chances offensively. Larkin carried his stellar playmaking over from the first game to the second game of this series, as he was the standout RedHawk in the first period of play.

Miami tied the game late in the first period courtesy of freshman forward Chase Pletzke. As time wound down in the first, sophomore defenseman Derek Dashcke swung a pass to Green who faked a shot and squared a pass in front of the opposing net. Pletzke finished the play with under one second left in the period.

The second period would bring with it a flurry of scoring chances that would see each team find the back of the net. Minnesota Duluth tallied two goals through sophomore forwards Tanner Laderoute and Noah Cates.

Trailing 3-1 halfway through the second, the RedHawks found a way to pull back within one goal on a great shot from the point by junior defenseman Rourke Russell. With the RedHawks within one goal heading into the final period of the weekend, they still had hope they could continue the comeback.

The intensity from the first two periods continued during the third period, as both teams increased their physical play. Both teams found ways to possess the puck in the offensive zones and make the necessary stops defensively.

Miami didn’t have enough in the tank, though, as the visiting Bulldogs went on to win Game Two of the series with a score of 3-2.

“Too many passengers tonight,” Bergeron said. “The compete level was not good enough. And they (the Bulldogs) showed that you have to be able to play back-to-back nights in college and we showed that we were not ready.”

Although Miami could not complete the sweep, it showed a foundation to build off as NCHC play continues. The RedHawks travel to Omaha, Nebraska on Nov. 22 and 23 for their next weekend series. 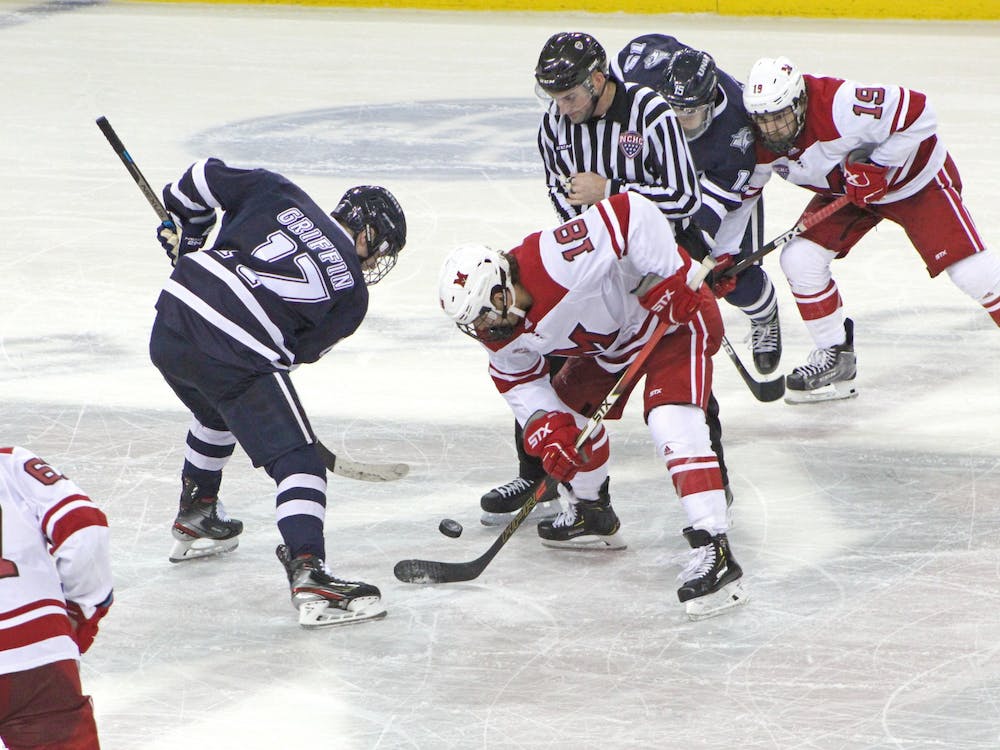 First place in the Mid-American Conference.