When Miami University alumnus and entrepreneur Brandon Smith wants something, it's hard to shift his focus.

Smith played prep league hockey in high school at Cleveland’s Gilmour Academy and quickly became attached to the ice. When his friends were applying to different colleges, Smith focused on perfecting his game and figuring out how to play after graduation.

“[Hockey] was such a huge part of who I was at the time,” Smith said.

Smith knew he wanted to play on a collegiate team and took a year off after graduation to play junior league hockey before being offered a walk-on spot on Miami’s varsity hockey team.

His devotion to the game was evident, but he was just as determined to do well academically.

As a student in the Farmer School of Business (FSB), he and his teammates supported each other as they balanced athletics and academics.

“We had such a strong group that lifted each other up,” Smith said. “We all pushed to have excellence in both.”

Smith was in the early stages of studying for the Graduate Management Admissions Test (GMAT) when his younger brother, Jarred, gave him a call.

Jarred, a senior at Brown University, proposed an idea for a sports drink. Jarred wanted to create an alternative to the typical sugary drinks that dominated the market.

Smith agreed and quickly found himself invested in what would become the next chapter in his life.

“It was consuming,” Smith said. “Once we started to figure it out, we couldn't really put it down.”

He and his brother invested hours into getting their product, an energy drink called NOOMA,  off the ground. The name is short for “no more acids,” a trait they find common in many drinks dominating the industry.

He and his brother, who are both finance majors, had no experience with making an energy drink but knew they wanted to compete in the market.

With hard work, they quickly got NOOMA ready to compete against other leading products. It’s now sold in approximately 4,500 stores per state. Smith is happy with his business success but is focused on what he can do to make his product even better.

“I think we’ve had some good wins, but we aren’t the type of people to say ‘Wow, look at all we’ve accomplished,’” Smith said. “[We’re aware] we still have a bunch of problems and a bunch of things we need to figure out, and I just think that’s who we are day by day.”

Kevin Phaup didn’t make his way to college until later in life.

He spent the first 15 years after graduating high school trying to figure out what he actually wanted to do before spending a large amount of money on a degree.

He built houses for many years. He met his wife, a grade school teacher at the time, through the local ministry where they both mentored troubled youth. Although he enjoyed what he did, the weight of both these jobs soon became too much for him.

After having a conversation with his wife, they decided they were ready to go through a new phase of life together. Phaup wanted to pursue a degree in art and architecture, something he said building houses prepared him for immensely.

Phaup and his wife toured Miami’s campus and immediately knew Oxford was the place for them.

“The campus is beautiful, and the people and facilities were great. It was kind of a no brainer,” Phaup said.

Phaup walked onto campus as a 30-year-old first year. His age meant his story differs from the typical college student.

“I wasn’t ready to go to school straight out of high school,” Phaup said. “I think [waiting to go to college] was a great choice for me. We had a very different experience. A lot of what those college students were experiencing, we had already [went through] that.”

His first year took some adjusting, but he quickly found himself becoming close and having a professional relationship with his professors.

“Beyond my freshman year, I started to feel like I was a part of the teacher group as well,” Phaup said. “They treated me more like a colleague than a student. And the students really looked up to me and came to me with questions.”

Upon graduation, Phaup worked as an industrial designer and has worked on exhibitions for the Smithsonian, U.S. military and in developing countries. He said he thinks the biggest part of his creative process is doing research and understanding who his work is for.

“There’s more of a research component with my designing — with work I've done in developing countries, wheelchair design, disaster relief,” Phaup said. “That creative process begins with me trying to understand the people I’m designing for. Empathy experiences where you try to put yourself into someone else's life is where that creative process starts.”

Phaup now works as an assistant professor at James Madison University. He remembers the great one-on-one relationships he’s had with professors at Miami and works hard to emulate that with his current students.

Robin Beavers applied to Miami after receiving a handwritten postcard from a current student. She loved the personal touch but had never toured the campus or heard much about the university.

Beavers came to Miami undecided but understood the importance of a public ivy education. She had an idea of what she wanted to do, but the opinion of others also played a role.

During her sophomore year, Beavers decided she wanted to declare education as her major but was warned that starting a regimented major late in the game would delay her graduation.

In response, Beavers doubled up on classes and only graduated a semester later than she intended.

She believes the opportunity to teach in Belize prepared her for her current position.

“Me being on the outside and not [initially] understanding some of their cultural norms has been one of the most influential pieces in my current career because I am in a building where 14 languages are spoken,” Beavers said.

After returning from Belize, Beavers was offered a substitute teaching position in LCS and quickly moved into a full-time position, which, according to Beavers, is a rare opportunity.

“No one ever retires,” Beavers said. “When there’s an open position, we get hundreds of applications.”

Beavers also values her ability to shape the lives of students. While teaching in LCS, she began to recognize her necessity in the lives of many girls in her classes.

“I noticed that there was some young ladies that were getting into trouble for asking for advice on simple things that I feel every young lady should know, but there really was no place for them to gain that information or some of those skills,” Beavers said. “Some of them just needed a helping hand or someone to just guide them and some positive influences.”

During her first year at LCS, she started a program called Girl Empowerment in Middle School, a mentorship program for girls in the sixth, seventh and eighth grade.

Former students who graduate out of the program come back and talk to the middle schoolers and provide a helping hand as they transition into their high school years.

Beavers now serves as a principal in LCS at Garfield Middle School.

Beavers said Miami prepared her for her current career and she’s grateful for the opportunities made possible through her time here.

Jean Forney didn’t know she wanted to pursue psychology when she applied to Miami.

“Some of the schools I was looking at [music performance] wasn’t really an option. The schools were so big that it wasn’t really feasible. But here I could study other things, but also study music.” said Forney.

But after interacting with her professor, Rose Marie Ward, her passion for psychology began to develop. She quickly became an active member of undergraduate research, working alongside Ward doing research involving eating disorders in young adults.

“Rose Marie Ward really encouraged us to pursue our own research interests, which gave me more confidence in my abilities,” Forney said. “She was interested in getting to know us as people. We weren't just students doing work for her.”

Forney loved her research so much she decided to continue it. She said Miami prepared her for upper-level education as she pursed her masters and doctorate degrees from Florida State University.

“Miami put me in a great spot to be successful in graduate school,” Forney said. “My time involved in undergraduate research, the music department and extracurriculars taught me how to work with others, manage my time and work toward long term goals.”

Now, she serves as an assistant professor of psychology at Ohio University. She specializes in the field of eating disorders, specifically, the outside factors that contribute to eating disorders in young adults. She enjoys being able to share her knowledge with the next set of clinicians and knowing her work it impactful.

“It’s nice knowing that the work I’m doing is going to have a direct impact because I’m training the next set of clinicians. It makes me feel good that people are going to come out prepared.” Forney said. 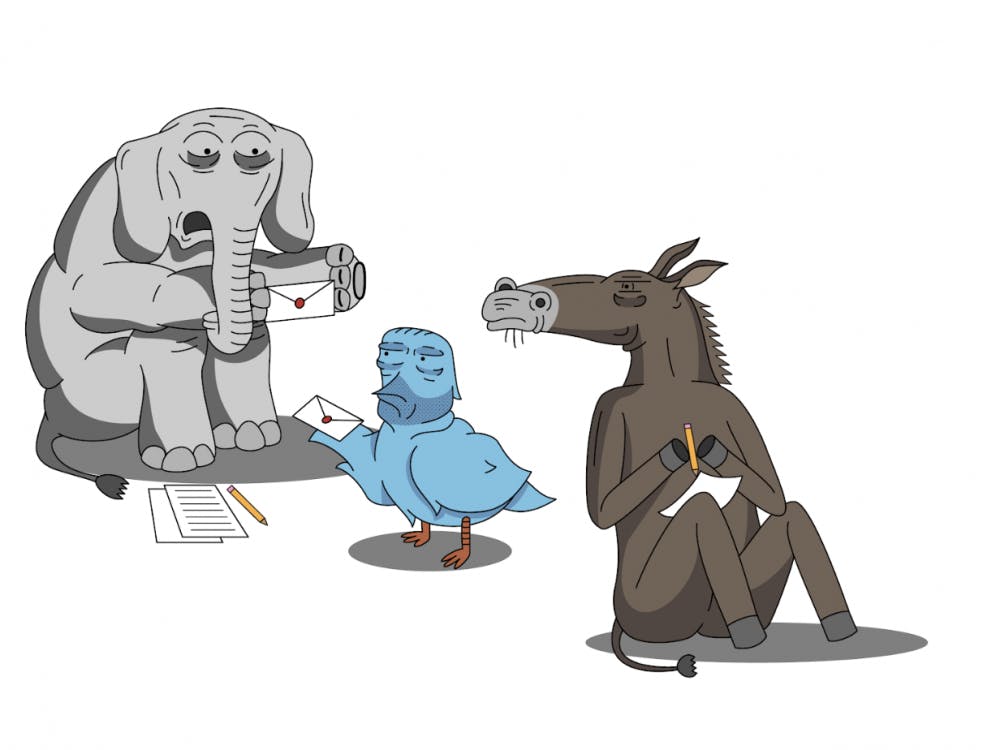 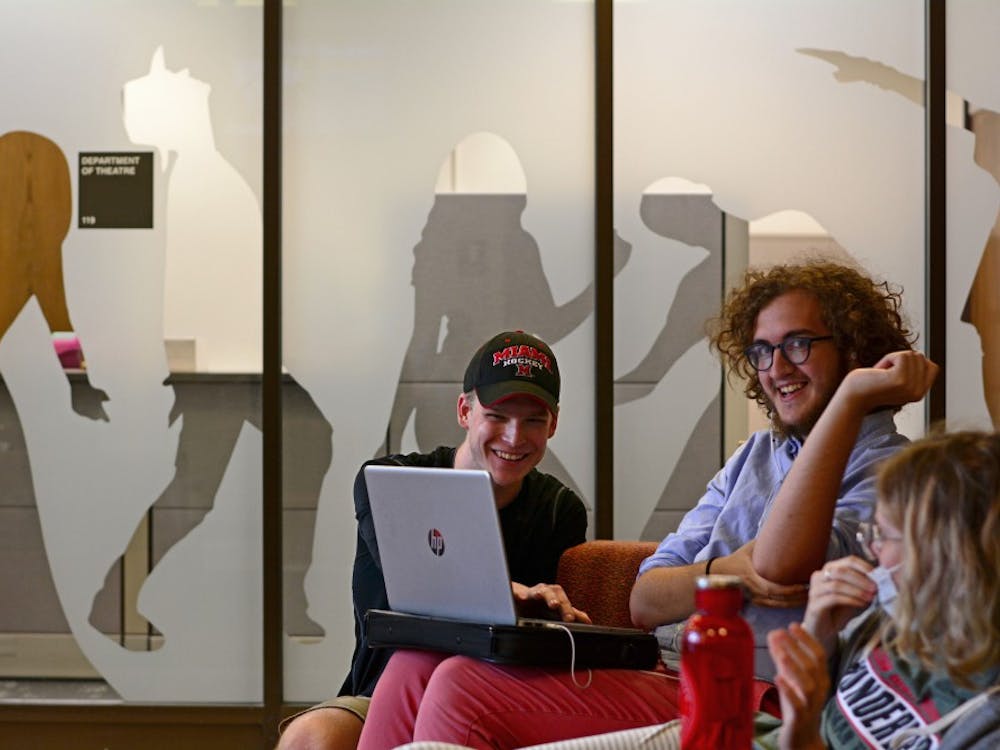 The Center for the Performing Arts (CPA) recently added a series of stencils in dramatic poses to the window in the building’s southern common area. The stencils showed only skinny models that some thought weren’t representative of the entire Theatre Department. Elizabeth Mullinix, dean of the College of Creative Arts (CCA), said the design was meant to unify the CCA buildings and to create a “brand” for the college.