It was one in the morning and a freshman girl with straight black hair and a simple grey sweatshirt sat in the first-floor lobby of Hepburn Hall. Her head had been buried in a programming textbook for hours. She told me to call her Jessica.

Jessica likes it here in the United States, but she’s worried about the oncoming cold. She’s never owned a winter coat before; there was no reason to in 100-degree Vietnam. According to her, Ohio weather is really strange.

After applying to Drexel University and the University of Wisconsin, she chose to come to Miami because it was affordable. Jessica knew she wanted to study abroad since entering secondary school in Vietnam.

18-year-old Jessica will likely see snow for the first time over winter break. She’d prefer to go home and visit her family, but they don’t have the money.

“Hopefully next year,” she told me.

Jessica’s favorite place to eat is Garden Commons. Her favorite meal is the stir fry. Sometimes she eats milk and cookies for dessert. She likes to go Uptown with her friends on the weekend to get pizza. Jessica badly misses the Vietnamese food “pho.” I pronounce it wrong and she corrects me; we laugh and chatter about it.

Jessica told me that our conversation could have never happened back home; she used to be extraordinarily shy. It took Jessica traveling 8,000 miles from her home to reinvent herself.

Scared before boarding the plane for America, but now confident and comfortable, she hopes to become a permanent resident. She is close with her family and misses them dearly but not consistently. Like most college kids, Jessica has been enjoying her freedom.

We make shopping plans and exchange numbers before heading to bed.

By Lexi Whitehead, The Miami Student

They both happened to enter a giveaway at Goggin Ice Center during Welcome Weekend.

They both happened to be leaving Martin Dining Hall when it was announced that they were the two winners. Their prizes: Miami blankets.

They both happened to be at the same party on a Saturday night. She was pulling her friends through the crowd and, literally, ran into him.

They laughed at their multiple, coincidental run-ins and decided to plan their next one.

He did not kiss her goodnight after their first night out. She went for a kiss and he went for a hug. She says it kept her humble.

She did not want a boyfriend. He was looking for something serious.

But he liked her so much that he agreed to keep things casual and didn’t pressure her into anything more.

So they just kept hanging out.

When she was bored and wanted to talk to someone, she automatically texted him. When she was lonely in her dorm one night, she asked him to come over and cuddle.

They hung out almost every day for a week.

He fit almost every requirement on her perfect-guy-checklist, one which her mom believes to be too unrealistic. He accompanied her to a club meeting she was nervous about. She was slightly jealous of his beautiful female friends.

They slow danced on the roof of Thomson Hall at night to a Frank Sinatra song.

“I really wanna call you my girlfriend,” he told her.

She finally gave in to the feelings she had been repressing.

“Well then, you can call me your girlfriend,” she replied. “I don’t know why I’m resisting.”

They tell anyone who will listen about each other, including the ladies at the Goggin office who gave them their prizes.

“Thanks for the blanket and the boyfriend,” she told them. 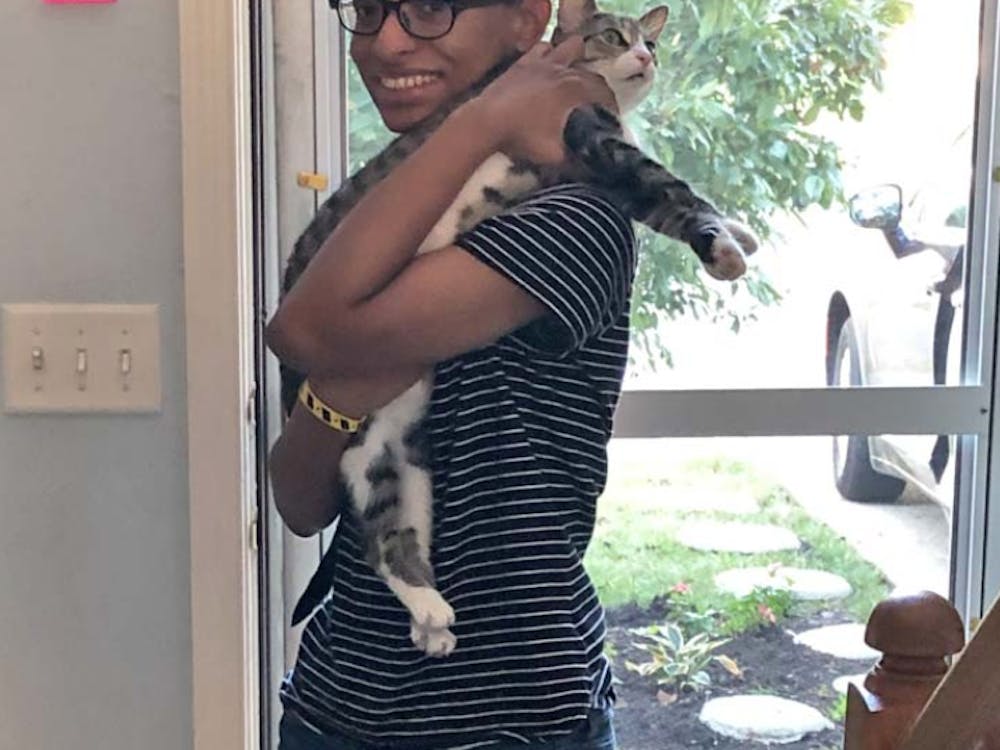 Adrienne was a studio art major, but her love for art extended far beyond academics. Her mom, Jennifer, said she became fascinated with art at just five or six years old. Whenever it was raining outside, Adrienne and her siblings would have sticker parties, covering the dining room table with stickers, construction paper and crayons.   As she grew older, Adrienne never lost that love for creating.