At least four signs promoting a white supremacist organization have been found posted across Miami University's campus since Friday, April 5.

Three of the signs were found affixed to light and traffic poles near Bachelor Hall, and another was found on a public bulletin board outside King Library.

The signs endorse Patriot Front, a white supremacist group that was part of the "Unite the Right" rally and terror attack in Charlottesville, Virginia, in 2017 that resulted in the death of a counterprotestor.

Patriot Front uses nationalistic imagery to advocate for the preservation of "pan-European culture," or whiteness, according to the Southern Poverty Law Center, a non-profit legal organization that monitors hate groups and extremists.

The signs found on campus bear slogans such as "not stolen, conquered" in reference to American territory, "keep America American" and "report all illegal aliens; they are criminals" with the phone number of U.S. Immigration and Customs Enforcement (ICE).

The Office of Diversity Affairs (ODA) received a report about the signs on April 5, and informed several administrators, who passed the information along to the Miami University Police Department (MUPD) and the Physical Facilities department, so they could be on the lookout for the signs and remove them.

Jeremy Davis, senior director of physical facilities, said on Wednesday, April 10, that staff had been informed of the report but that they had not yet found the signs.

The signs violate several regulations in Miami's signs, posters and banners policy. Because they are less than 11 by 17 inches, they are considered signs, not posters, and are not allowed to be affixed to light poles. Additionally, they do not include an event or posting date.

Jayne Brownell, vice president for student affairs, said the content of the signs, however, is protected by free speech laws. If they were in accordance with Miami's signs, posters and banners policy, the university could not remove them.

"It doesn't mean that we approve of them," Brownell said. "We certainly can be vocal in our opposition and in condemning the message."

The Miami administration claims that since the signs do not contain true threats, obscenity, fighting words, incitement to imminent lawless action or defamation, they are protected as free speech.

Charlotte Oestrich, an English graduate student, tweeted Monday, April 8, at the official accounts of Miami University and University President Gregory Crawford alerting them to the presence of the signs. Miami replied on Wednesday, April 10, saying, "We have been working on this matter with student life for several days. If you see any such signs, please call [513-52]9-2222, and they will be removed."

At press time, two of the signs had been removed: the one on the bulletin board outside King Library and one near Bachelor Hall. The remaining two near Bachelor had been written over, though they remained affixed to the poles.

"I don't think that these groups should be allowed to be hanging these posters on our campus," Oestrich said. "I think it is extremely detrimental to the campus community and environment in its totality because these are very hateful groups. Regardless of what they put on the poster to recruit people, their basic ideology is one of hate, and I don't think that has a place anywhere in our institution or on our campus."

Kimple said that incidents like this are an ongoing issue, as there have been instances of posters with hateful rhetoric in recent years.

"Clearly we, the university, need to do more," Kimple said. "It's a thing of figuring out what's the best mechanism to make that happen across the campus because ... we have at least 17,000 students and, on top of that, the faculty and staff who also need to be a part of that conversation, so you have over 20,000 people who need to have these different types of dialogues. But we've got to figure out something quick because it's not getting better, unfortunately."

By the evening of Monday, April 15, the posters had all been removed. 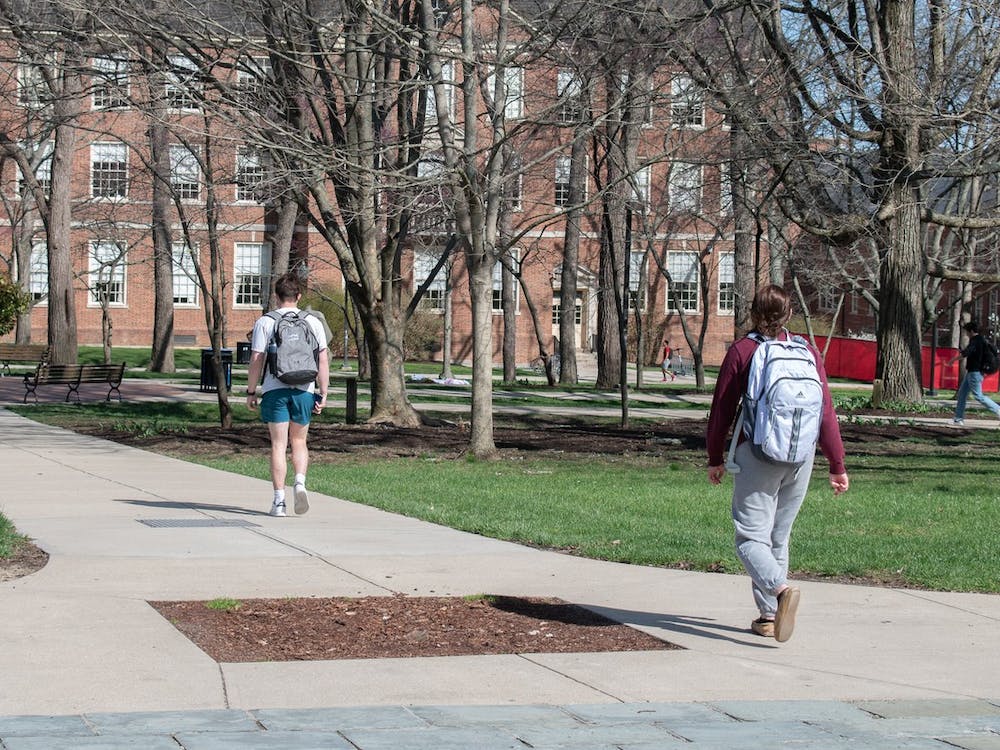 For years, as people stood under Upham Arch, looking past the Seal out toward King Library, a tree blocked their view down the straight sidewalk.