Dining Hall Diet: Can You Eat Healthy on Campus?

When I grab food in between class, or sit down to eat at the dining halls with friends, I don't really think of what I am putting in my mouth. Sometimes it's a salad, but a lot of times (OK, most of the time), I end up grabbing a slice of pizza from Sundial or late-night mozz sticks from Pulley's. So, I decided to start a little experiment.

I decided I would follow the diet given to me by instructor of Kinesiology and Health Christina Minges for five days. I live on campus and have a meal plan, so most of my meals are in the dining halls and on campus. This diet is the recommended intake for my body: a 5'10", about 140 lbs., 20-year-old female who exercises 3-4 times a week. I might be a little taller than the average female, but this is a normal diet for your average college student. For my height, I am at a normal, healthy weight, so the goal isn't to try to lose or gain weight, but simply to maintain my weight. I used MyTray to find the nutritional value of the foods that I eat on campus, and Google when that failed.

I woke up determined to be healthy, which is often how most diets start. I had a sandwich and apple from Boulangerie for lunch, some of my grandmother's cookies for a snack, and shrimp stir-fry from Mein Street for dinner. I substituted some of the less healthy things I normally get, like Saratoga chips, with a better option, like an apple. When I was waiting for my friends for dinner, I looked up what I wanted to eat before I ate. I was craving wings, but after I looked up the nutrition facts I decided against it, and went with the better option of stir fry instead. I learned that looking up options before you eat is a good way to avoid foods that are loaded in fat and calories, but later that night I didn't take my own advice.

Then I went to Pulley's after a study session at King Library, when I was in need of some comfort food. I figured I had been eating pretty well, so I splurged on mozzarella sticks and a vanilla milkshake, a favorite after a night of studying. That turned out to be a big mistake.

The only nutrient I hit my target for was protein, while calories, fat, carbs and sodium were all over my allotted totals for the days. I did not meet my daily fiber requirement. I was doing well until I went to Pulley's, so if I had chosen a healthier snack I would have been within my range. It was relatively easy to eat healthy for most of the day if I made conscious decisions to eat right.

I had a sandwich and Saratoga chips from Boulangerie for lunch, a pulled pork sandwich for a snack, and a BLT sandwich and a fruit cup from Delish for dinner. I finished off with a late night snack of Ramen noodles lunch and my grandmother's cookies.

All told, I didn't exactly follow her recommendation of putting color on my plate. The sandwich I had for lunch wasn't necessarily unhealthy, but the only fruit I had that day was the one fruit cup and I didn't have any vegetables besides what I put on my sandwiches. I however hit most of my totals: I had 1,744 calories, pretty close to the 1782 I am supposed to have. I was within my range for protein, actually just under my range for carbs, and just outside for fat. I went over for sodium intake and under my fiber intake for the day. I found it can be hard to make a conscious effort to put color on your plate, and small amounts of hidden fat can make you creep over your total for the day.

Today was the day of my sorority's' formal. Before we boarded the bus, I had an apple, a yogurt, yogurt covered pretzels, Ramen chicken, and onion rings from Encounter. At the formal, I had salad and grilled chicken, then made my way to the dessert table, which was loaded with tempting treats. I have a sweet tooth, so I took advantage of what was there, and had a brownie and two cookies. It was an abnormal day for my diet, but I chalked it up to formal.

I didn't realize how abnormal the day was until I calculated my totals. I was well under my calories for the day, with only 1,386 calories. I hit my target in fat and protein, but I was under my target for carbs and fiber. I was over my total for sodium, but only barely, with 2,437 g.

I realize that snacking throughout the day isn't always the best option, as I didn't eat enough calories as I should have, in yet I still made my targets for fat and protein. I did however eat a more colorful diet, with salad, grilled chicken, yogurt, and apples, but I still made some unhealthy decisions, with onion rings and the dessert bar at formal. I need to pay better attention to what I eat, not necessarily by eating less, but by eating the right foods, and even eating more calories.

I had a banana nut muffin for breakfast before I rushed down to the barn early for a lesson. I had a sandwich from Delish for lunch and an apple. I finished out the day with mac and cheese bites, waffle fries, angel food cake, and a cookie at an academic banquet my sorority had.

I finished the day pretty good on calories: 1,799, which is around my target. I however went over on sodium again,, and I had a whopping 104 g of fat, well over my daily total. The biggest culprit was Skipper's, the mac and cheese bites alone had 44 g of fat. I actually was under my total for carbs, and I just about made my range for protein, at 44 g. I was under my range again for fiber.

I discovered that eating from an off-campus restaurant can actually cause more temptation and unhealthiness because of the unhealthy food offered. I also discovered I have no self-control when the food is put in front of me. For the last day, hopefully I will be able to cut my sodium intake, as that is the one that sneaks up on you the most, and get a little color on my plate so I can balance eating enough carbs with eating less fat.

I decided I would make a conscious effort to stay within my limits, especially fat. I started off my day well--a blueberry bagel and cream cheese from Tea Hive, and a cup of yogurt. I had a mid-afternoon snack of a banana and snacking chocolate from Emporium in between classes, making better decisions, even though I was in a rush. I finished it off with shrimp stir fry from Mein Street. Overall, I got more color on my plate and made a conscious effort to eat healthier for my last day of my "diet." I met my calorie goal again, with 1761 calories, but did I make those count? I was within my range for protein, and actually went a little overboard with cutting my fat, as I only ate 28 g of fat, which is well below what I should be eating. I overcompensated with carbs though, going over my range. I again failed to stay under 2300 mg of sodium, and under my fiber requirement.

Overall, I would say this experiment went well. It made me more conscious of the decisions I make in the dining halls, and what I'm eating. Using MyTray is a useful tool for learning about what you're eating, and when you have a craving, it can be helpful and sometimes shocking to learn about what you're putting in your body.

That being said, I need to watch how much fat and sodium I consume. I was over my range for fat several times, and over for sodium every day. Fat and sodium can be hidden in the foods in the dining hall, so that is something you have to watch.

Eating off campus is not necessarily healthier when you eat out. Most of the off-campus restaurants I frequent--and most other on-campus students -- feature greasy, fatty foods that I am willing to pay for. I'm not going to go to Buffalo Wild Wings for a salad. So, if you do eat off-campus, just be conscious of what you're eating for the rest of the day, and try to make healthier decisions on campus.

Eating on the go or in-between classes causes more temptations for unhealthy snacking, but that can easily be countered with smart decisions. Instead of grabbing some chips, you can try grabbing an apple or a banana.

Cravings are real, and they can derail what would otherwise be a good day. While mozzarella sticks and a milkshakes are fine every once in awhile, I shouldn't make that a habit after I time I study in the library. If you do splurge during the day with ice cream or a late-night Pulley run, counter it with a salad earlier in the day.

There is a lot of unhealthy food in the dining halls, and if you don't educate yourself on what goes into your food, you won't make smart decisions. Looking up nutrition facts is a good step for being conscious of what you're eating.

Overall, the diet wasn't as difficult as I thought it would be, but I did make mistakes. After all, there wasn't one day where I stayed within the range of all my nutrients. But this did make more more conscious of what goes in my body and how I can control the foods I eat. 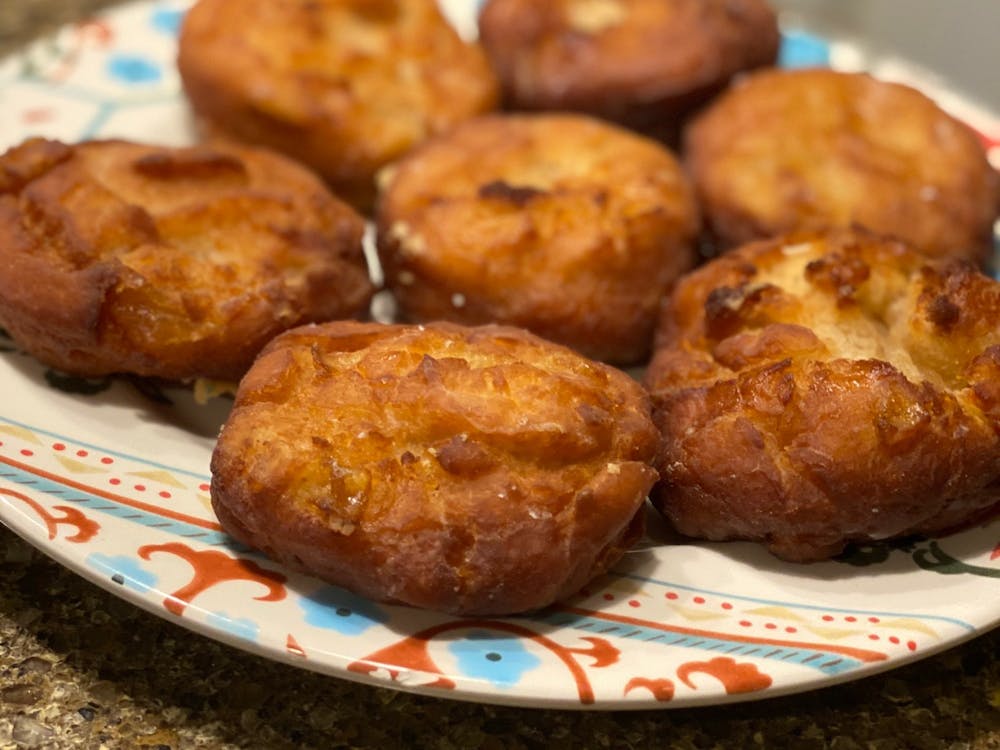 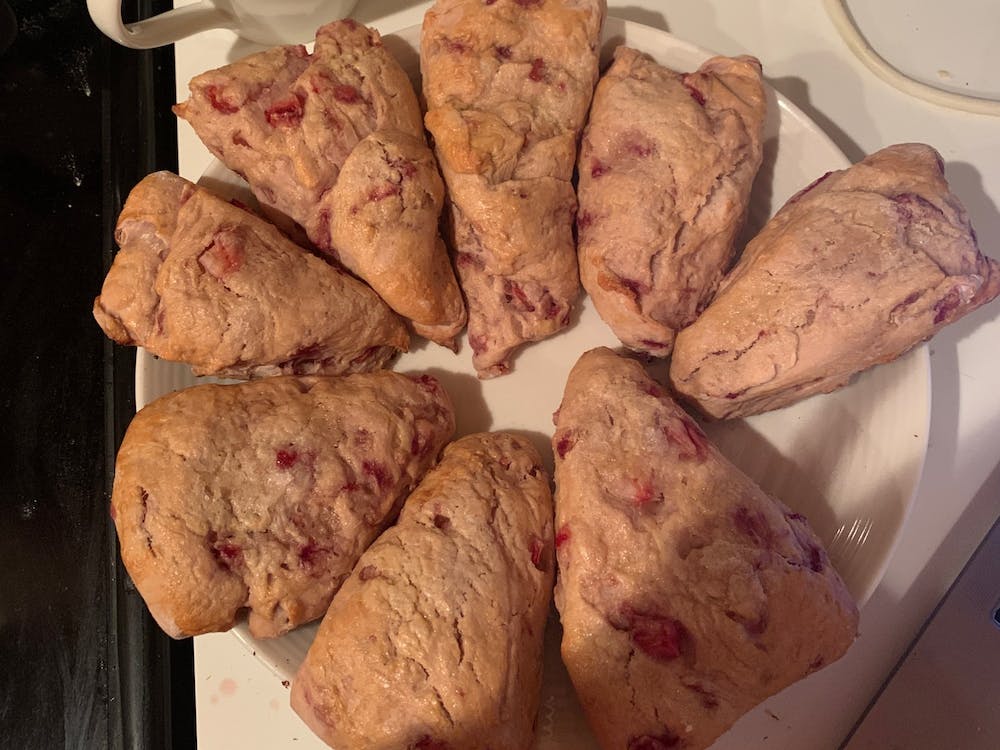 The standout in my baking endeavors thus far has been the strawberry scones I attempted after binge-watching the show “Four Weddings and a Funeral” on Hulu. 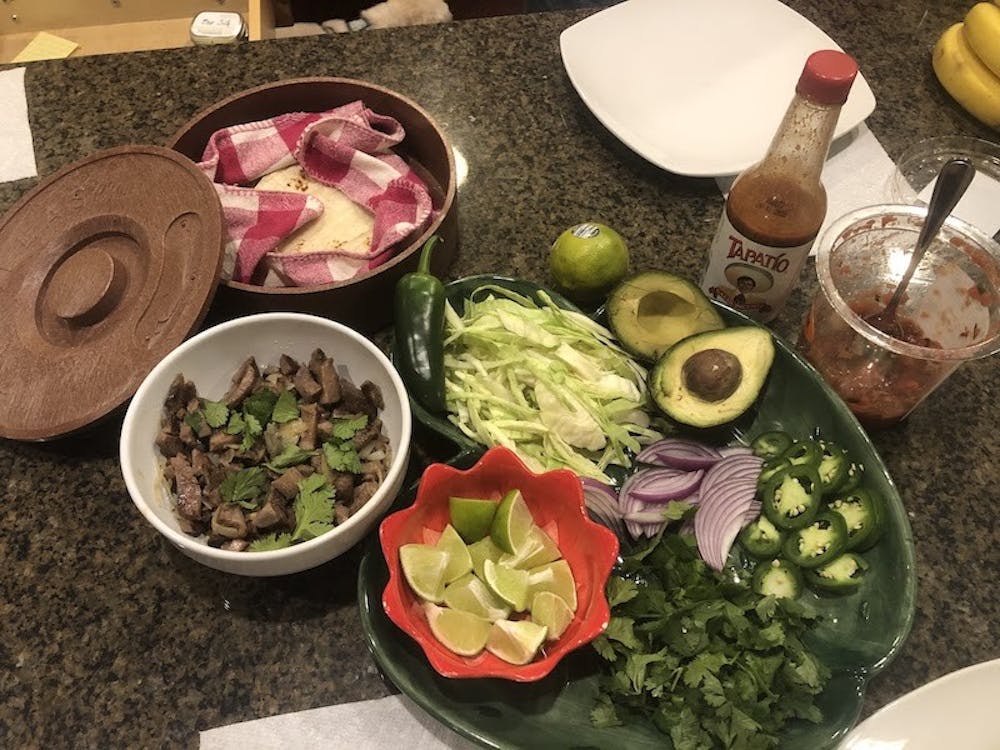