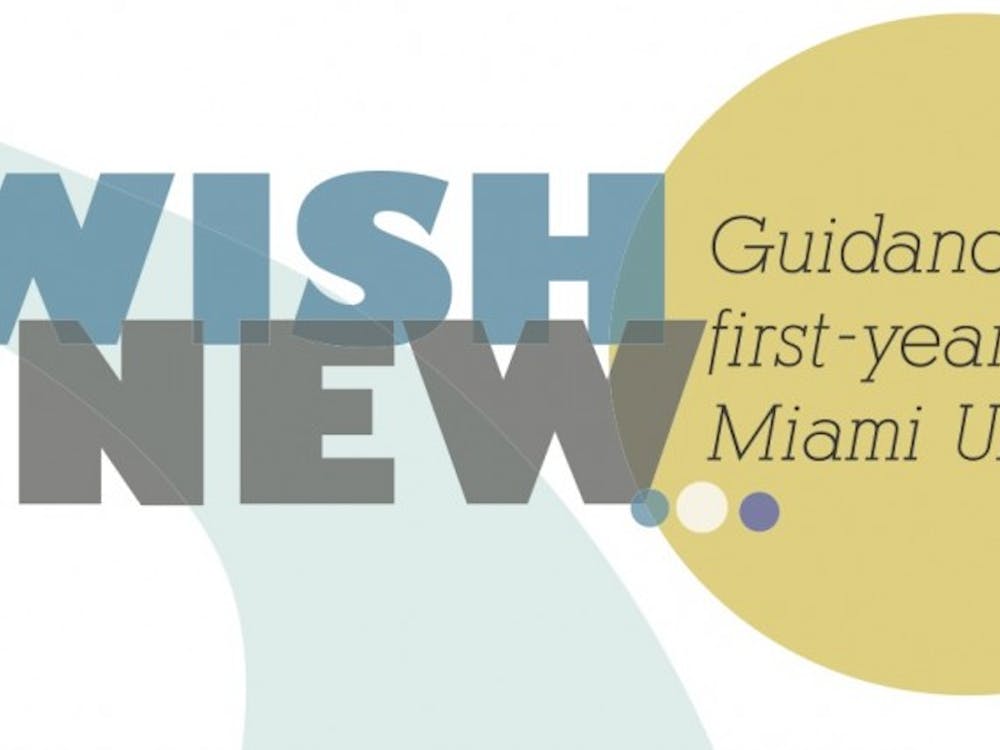 Amelia Carpenter, Features Editor (ERIN MAHER AND HANNAH MILLER | The Miami Studenta)For most first-year students at Miami, being a college student would be living with a roommate that's not a sibling for the first time, taking care of oneself when ill, waking up without the help of parents, maintaining a schedule and balancing a social life and excelling academically. But since that could be overwhelming, current Miami students offered their two cents in what they wish they would've known as a first-year.Beyond scanning the course catalog, floor plans, room dimensions and cheap carpet sales during move-in week, there are other elements of campus life Miami students wish they had known about prior to their arrival.AcademicSophomore Becca Sues said she wished she spent more time talking to her advisor and getting her grades up as a first-year.Sophomore Allison McDannel said the opposite."(I wish I knew to) go out as much as possible," McDannel said.Sues said she was stressed about the 'required' summer reading."I wish I knew I didn't have to read that summer reading book," Sues said.Sues and McDannel also said they wished they knew how to view grade distributions for courses and websites like RateMyProfessors.com.Grade distributions for all courses are posted on the Miami website at http://www.units.muohio.edu/reg/gradedist/. RateMyProfessors.com is an online resource for anonymous feedback about professors at all universities including Miami.ExtracurricularSophomore Zach Mason said how important it was to get involved at Miami. Through Mason's activities, he said he made a lot of friends."When I first came t school I met so many cool people, different (people)," Mason said. "It really changed my whole perspective."First-year Catherine Meeth said getting involved was important in making the transition from home to college."I know a lot of people who got homesick and wanted to go home right away," Meeth said. "They weren't meeting people."Meeth suggested joining clubs or student groups to make the transition easier, even if it's just temporary.Social"Brick Street rocks," Mason said. "It doesn't matter what day of the week, doesn't matter what you're looking for, Brick Street (has) it."Mason said there were activities at Brick Street every night of the week. For example, Mondays are karaoke nights, and Tuesdays are 90s theme nights."Embrace your freedom, embrace your new friends," Mason said.First-year Torrey Schusterman agreed that going 'uptown' was fun, but not required."Partying is not everything," Schusterman said. "You don't have to go out all the time. You are here to go to school."Residential and DiningMeeth found that by leaving her door open in her residence hall, she met a lot of people living around her."Someone told me before I came to school keep your door open, and I didn't think it was going to make a difference and it did," Meeth said.Junior Dan Albert regrets underestimating his dining options as a first-year student. Albert lived in Collins Hall on East Quad, closest to Erickson, a dining hall."I didn't realize until after leaving Collins how lucky I was to be next to the best 'all you can eat' dining hall on campus," Albert said. "I realized when I lived in Scott Hall sophomore year that all of the foods offered Ala Carte were the same foods but much higher priced. My friends and I have always made a journey back to Erickson to eat every year as a reminder"