There was a saying in my hometown that the University of Mississippi accepted “anyone with a heartbeat.” Their acceptance rate was 88%.

When I was applying to college as a senior, acceptance rate was a large factor in my decision and the decisions of my peers. I believed, and still believe, that acceptance rate reflects the quality of education and of the student body at a university.

I never applied to Ole Miss. How, then, did I end up at Miami?

The acceptance rate at Miami was 92% as of 2020. In a recent article from The Miami Student, the admissions office attributes this spike to problems that COVID-19 brought on in the college application process. Although this number may not reflect current trends in acceptance at Miami as of 2022, it’s not a question of accuracy, but a question of advertisement.

In the book The Public Ivys, author Richard Moll defines a Public Ivy as a university that offers a level of education up to par with the Ivy Leagues, but at a public school price. Miami University advertises itself as a Public Ivy, but Miami doesn’t rank with other prestigious Public Ivies anymore.

By comparison, Miami University currently ranks #105. In 2018, Miami ranked #78 with an acceptance rate of 75%. When Miami’s acceptance rate increased, their ranking decreased significantly and they lost the ability to advertise themselves in the top 100 national universities.

But how do ranking and acceptance rate correlate to education? What makes Miami’s education unlike Ivy League schools now or in the future?

My theory is as follows: an increased acceptance rate could reflect negatively on Miami’s prized education. Some individuals disagree, saying that Miami’s quality of education is still exemplary and that the acceptance rate has no correlation to education at Miami. For instance, Vice President of Enrollment Management and Student Success Brent Shock holds this view in a recent article from The Miami Student.

Acceptance rate could be nothing but a number, and it may not have a correlation, for now. I believe that in order to understand the correlation between acceptance rate and education, we have to step away from the present and look ahead.

I believe that “92%” will stand out in future applicants' minds, that they will bullet-point Miami  under the heading Safety Schools in the back of their mind, especially in an age where acceptance rates for colleges seem to be going down.

For previously qualified college applicants, the increased acceptance rate might turn them away from Miami because they might believe Miami fosters an “easier” education, meaning the school could lose valuable potential students.

For previously unqualified applicants, Miami could be the obvious choice because they know they will be accepted, making the pool of applicants increasingly less qualified if the trend in acceptance rate continues.

In addition, the quality of education at any university begins with its students. The types of students accepted into a university shape its educational and social culture.

The staple of Ivy Leagues and Public Ivies is their commitment to education and learning. In this way, they must be selective in choosing candidates that will best represent their educational values and will be able to handle academic difficulty. This is why their acceptance rates are low; it ensures that they are accepting the most qualified students to uphold their reputation and commitment to education.

When only eight out of every 100 students are denied admission, the likelihood that the university is accepting students that may not be up-to-par with their traditional educational requirements increases as opposed to Admissions’ precedent. As a result, an environment of leniency is created.

Leniency begins in Admissions, but it seeps into other aspects of college education. Education is not built solely on teaching and challenging students, but it also must align with the students’ intellectual capabilities.

If education does not consider the academic ability of the student body and makes assumptions about the capacity for students to learn, you might find many students failing out if the curriculum is too difficult. Therefore, an increasing number of unqualified students accepted into the university could cause professors to sacrifice instructional time or adjust assignments to accommodate students falling behind in the curriculum. Their ability to educate affectly has to reflect the capacity of the students’ understanding to ensure student success.

Although not drastically, the quality of education could degenerate little by little over time.

As a result, Miami may continue accepting 92% of applicants, and that’s a decision for Admissions to make. I am not doubting their methods because the question is not about whether Miami should lower the acceptance rate.

I came to Miami because I believed it was a Public Ivy, and I believed in its commitment to education. I’ve been challenged, and I’ve been pushed to grow in my learning. But I don’t believe that the education rivals that of other Public Ivies or Ivy Leagues, and I attribute this perspective partially to the acceptance rate.

Miami seems to differ in these qualities, begging the question: Will we continue to be a Public Ivy? 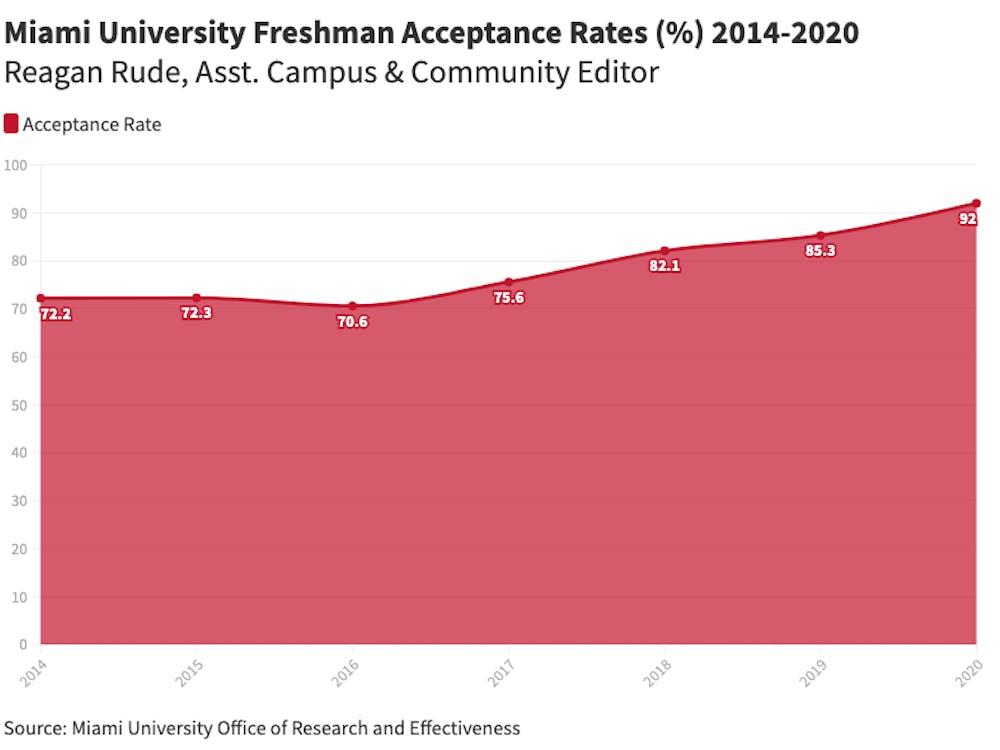