Three years of suffering — and a magical thirty minutes

There are few things in sports more fulfilling than a playoff win.

Especially when it’s for a team that, prior to this season, had never finished higher than bottom of the league.

I couldn’t travel to “New York City” (actually Harrison, New Jersey) for the game, but that didn’t stop me from crowding into a bar with friends at noon on a Saturday, which happens to be the time when bars are the least busy, luckily.

I didn’t really sleep the night before — I was simply too nervous to function like an actual human being. It’s easy to be grateful for McDonald’s breakfast at such times.

I am, of course, talking about FC Cincinnati, the local metro area’s professional soccer team.

The top seven teams in each conference of Major League Soccer (MLS) make the playoffs, with the top team receiving a bye through the first round. In the three seasons prior to this one — FC Cincinnati’s only three in MLS — the club finished bottom of the 14-team Eastern Conference. This year, they finished fifth. That meant a date with the fourth-placed New York Red Bulls, assigned to kick off at noon last Saturday.

I know people that made the journey, and they have all their own minor stories of the trip — but that’s for a different article for a different outlet. I, however, stood in the corner of a bar that was relatively full of fellow FC Cincinnati supporters and watched it on a projector.

Despite all the nerves in the days leading up to the game, it didn’t really hit until the referee blew the whistle to start the game.

Three years of genuine emotional suffering, for the sake of a soccer team, leading up to a rollercoaster 2022 with some of the highest heights us fans had ever seen. And here we were, at the highest height so far — a playoff game.

I really hoped for an early goal — something to ease the nerves, at the very least — but it never came. The first half came and went without a goal, though not without lots of yelling at Red Bulls players and their insistence on reacting as if someone had taken a baseball bat to their leg whenever one of our guys would get near them.

And then began what we thought was a nightmare — the ball fell to the Red Bulls’ Lewis Morgan at the edge of the 18-yard box, and with FC Cincinnati players slow to close him down he struck an excellent shot into the top corner of the goal. 1-0, Red Bulls, with 40 minutes left in the game. A massive advantage for a team notorious in the league for (normally effectively) doing everything except playing the game of soccer.

And then I got a text message from a friend. “dont panic,” it read. “y’all got them right where you want em. this game so far has all the makings of a patented ‘thats so metro’ exit. equalizer in the 70th, heart breaker in the 90th.”

Few messages I have ever received have been so prescient about future events.

“That’s So Metro” is a reference to the Red Bulls’ status as the franchise of the former New York MetroStars, and that franchise’s history of absolutely blowing it in spectacular fashion in the playoffs. The franchise has made the playoffs 23 times in their 27-year history — including a current streak of 13 times in a row. They’ve reached MLS Cup, the playoff final between the Eastern and Western Conferences, just once — where they lost 3-1 to the Columbus Crew. (New York was the Western Conference representative that year — the old MLS playoff formats were weird.)

And, in true “That's So Metro” fashion, everything came true.

The timestamps weren’t quite right, but by god they were close enough. With just over 71 minutes on the clock, FC Cincinnati wingback Alvaro Barreal was fouled in the box, and the referee blew for a penalty, which captain Luciano “Lucho” Acosta duly converted to level the game. And in the dying minutes of the game, substitute Sergio Santos used his pace to get in behind the New York defense, and star striker Brandon Vazquez slotted the ball home to give FC Cincinnati the lead.

Over 100 minutes would eventually be played — 12 minutes of added time, something that essentially never happens in soccer — but the result was never in doubt after that defining Vazquez goal. Yet another chapter in the “That’s So Metro” story was destined to be written, and it was.

And I had a great day. 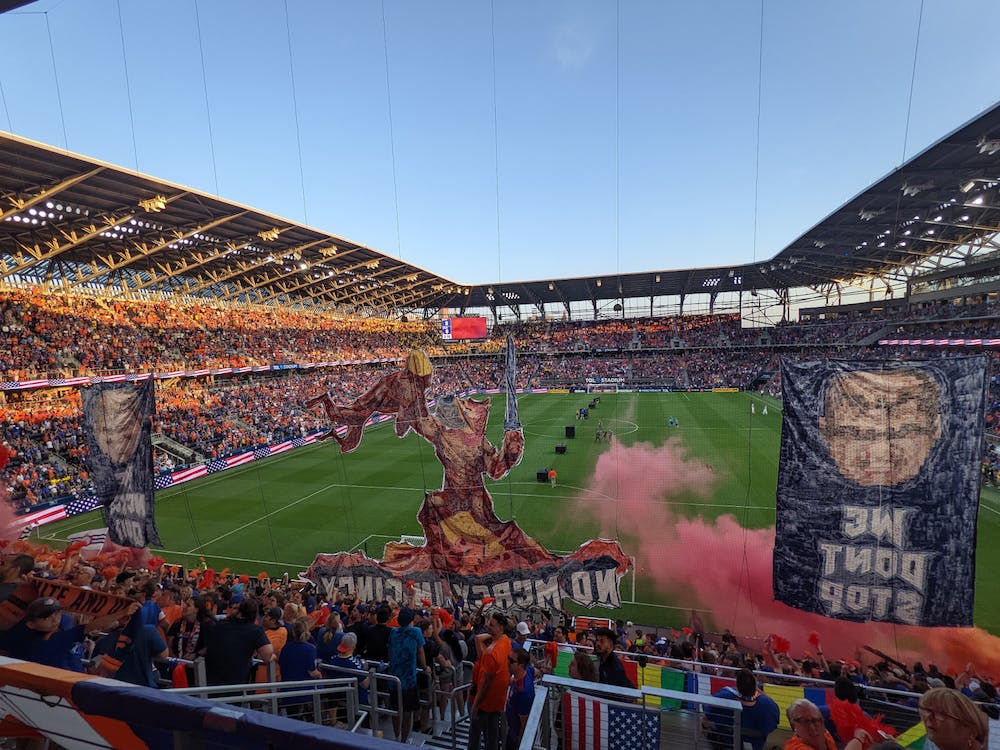 With a vibrant local team and a beautiful new stadium, it seems pretty clear - Cincinnati is the new capital of American soccer.

Coach Martin and RedHawks football gear up for the season

The first think most observers would notice about a RedHawk football practice this fall: the practices feel tense and simmer with energy. Coach Chuck Martin said that is one of the strengths of the 2022 squad. u201c[The players] come to work, they compete, they have energy,u201d he said.