The Miami Redhawks kicked off the 2022 football season on the road against the Kentucky Wildcats on Saturday, Sept. 3. Expectations were high following a 7-6 season and a second-place finish in the Mid-American East Conference last year. Quarterback Brett Gabbert threw for 2,648 yards and 26 touchdowns in the 2021 season, and he was looking to build on that momentum for the upcoming season.

On their opening drive, the Redhawks started off hot with a 22-yard run for a touchdown by running back Tyre Shelton. Gabbert and the RedHawks moved the ball well on their first drive. Then, the Wildcats retaliated with a touchdown pass later in the first quarter, tying the game 7-7.

The teams traded punts for the remainder of the first quarter, and early in the second, redshirt first-year Eli Blakely intercepted a pass near the goal line. The RedHawks had a chance to seize the game’s momentum at this point, but after an unsuccessful drive, Miami punted the ball again.

At the start of the third quarter the RedHawks lost all of their momentum. Firstyear Kentucky receiver Barion Brown grabbed Nicholson's half-opening kick at the five-yard line, and he found a seam. By the fifty-yard line, Brown had beaten all eleven RedHawks, and from there he walked into the end zone.

Less than a minute after Brown made the score 20-10, Kentucky struck again. On Miami's second play of the half from scrimmage, senior running back Jaylon Bester lost a fumble on the Miami eight-yard line, and Kentucky scored two plays later to make the score 27-10.

In his postgame conference, veteran Head Coach Chuck Martin acknowledged the team’s diminished performance in the second half.

He says that the team’s opening drive set the tone for the rest of the game. After an electric first half, the team was confident going into the second half. But after the Wildcats’ touchdown on the opening drive, the Redhawks began to lose confidence.

Coach Martin realizes that the Redhawks’ defense did many things well in this game.

“We played really hard over there, and found ways to get stops,” Martin said. “We defended the run for the most part, and we defended the pass well enough to make them run.”

The Redhawk defense put on a great performance. They stopped the Wildcats many times throughout the game, including multiple times in the red zone. Kentucky star senior quarterback Will Levis consistently felt pressure from Miami’s inexperienced pass rush.

It wasn’t all praise for the RedHawks performance, however.

“[Kentucky] ran and passed the ball good at times, our execution wasn’t great,” Martin said. “We had too many penalties, and there was too much confusion getting aligned. We will fix it up as the season goes on.”

The Redhawks had 7 penalties, compared to the Wildcats’ 4.

The RedHawks hit the field again this Saturday, Sept. 6, against the Robert Morris Colonials at 6 p.m. at Yager Stadium. 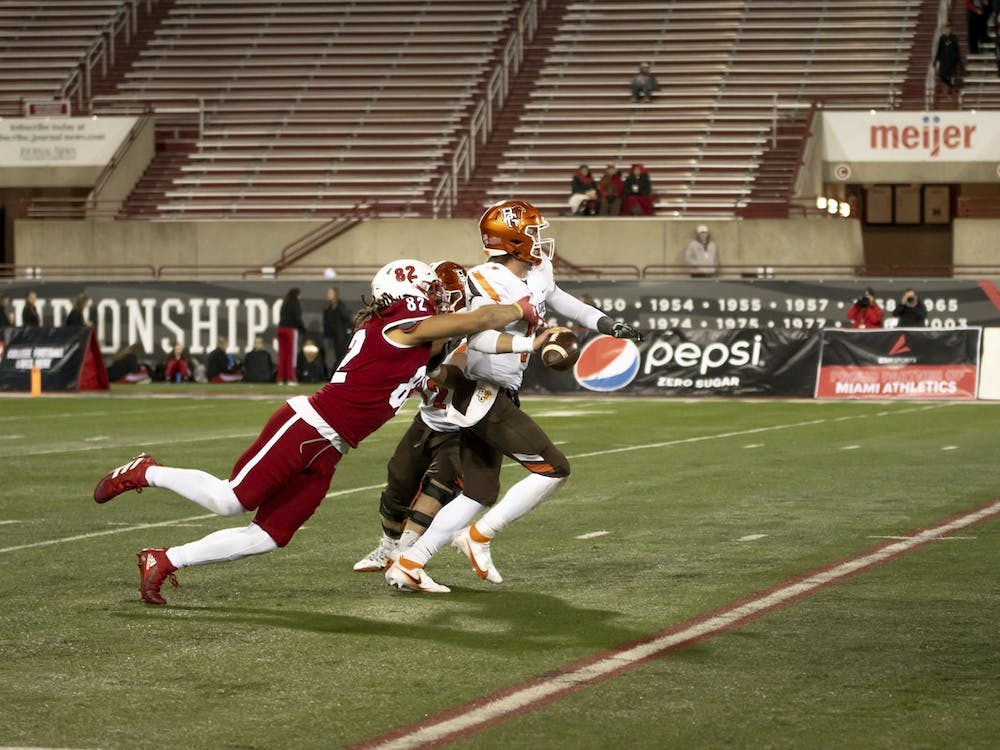