Do you find baseball stultifying? Would you rather clean up at New Bar next Saturday night than watch a bunch of guys stand around on a diamond for three hours? Yes?

Well you’re wrong, but you have a point. I watched every pitch of Miami’s series split against Ohio this weekend so that you don’t have to. Here were the most exciting moments:

The RedHawks bats never got going in Friday’s game, a 7-3 loss to Ohio. AJ Rausch, the second Ohio batter to the plate in the top of the first inning, hit the third pitch he saw so hard that it cleared the scoreboard in left center.

After that, Friday’s game stayed pretty quiet until the seventh inning. With the ’Hawks down 6-1 and runners first and second, Miami’s Zach MacDonald punched a single into left field. Willy Escala easily scored from second, and Benji Brokemond tore around second with home on his mind. Danny Hayden, Miami’s skipper and third base coach, was halfway down the third baseline holding up an emphatic stop sign for Brokemond, whose back was facing the ball as he ran toward the base.

Brokemond looked at Hayden for a half-second and put his head down, ignoring the loud order to stop and heading for home. Brokemond dove in just under the tag from the Bobcat catcher for one of Miami’s gutsiest runs of the season.

Miami put up four runs early in game one on Saturday and never looked back. Zach Maxey twirled a one-run complete game on his way to the win.

The second game was a lot more exciting though.

Down 6-1 heading into the bottom of the seventh, Miami put up a few runs, including one on a play at the plate where Brokemond decked the Ohio catcher and knocked the ball loose. Then first-year David Novak dug in with a runner on and tied the game with his second career homer, a long shot to left.

By the ninth, Ohio was back up three. Then Novak came to the plate in the eleventh hour. With two outs in the bottom of the ninth and two runners on, Novak tied the game for the second time with another clutch home run.

The RedHawks controlled Sunday’s game from the start, on the way to a 9-7 split-salvaging win. Novak made his mark on this one too, with a long third inning home run over the 400 feet sign in dead center.

It was a fun weekend for the ’Hawks who moved to 14-17 in conference. They currently sit seventh in the Mid-American Conference standings, 11 games behind first place Ball State, but only 2.5 games out of fourth.

Miami takes the field next on Tuesday, at Toledo at 3 p.m., before traveling to Urbana-Champagne for a three game set next weekend against Illinois. 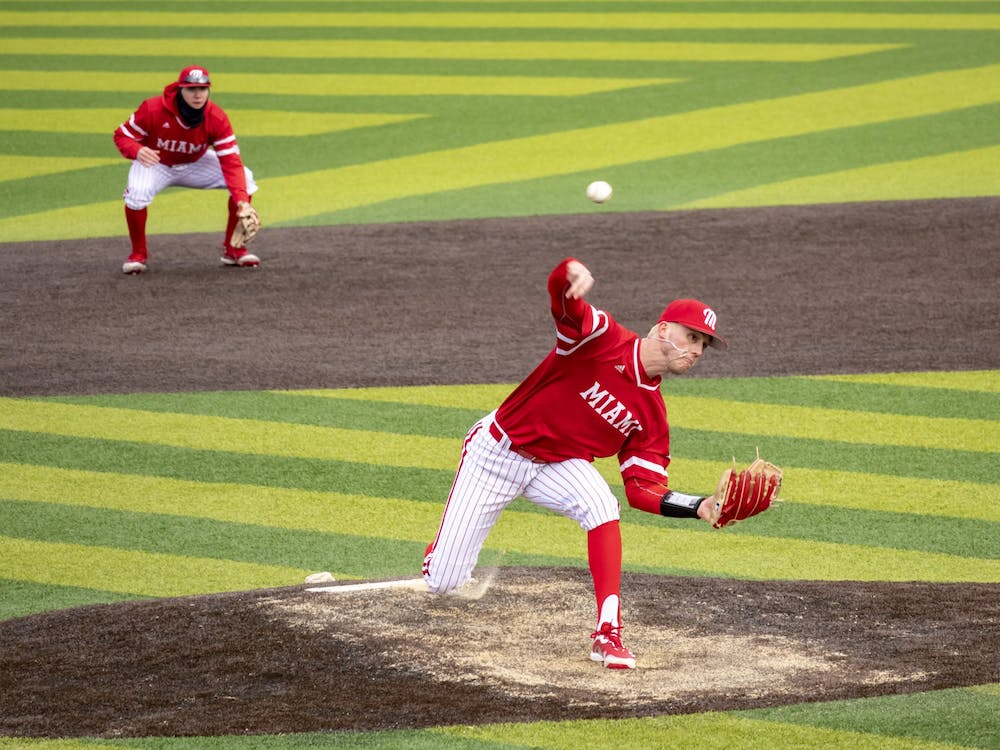