Miami University professors Cameron Hay-Rollins and Whitney Womack Smith received this year’s  Distinguished Service Award. The award is given to Miami faculty who have impacted students, a department or the university. It is given every other year, and recipients need at least two nominators.

Womack Smith works as a chair and a professor in the department of languages, literature and writing at Miami’s regional campuses. She said she enjoys both of her roles.

“I love teaching,” Womack Smith said. “I feel most comfortable in a classroom full of students, talking about books … But I also really like these days as department chair.”

During her time at Miami, Womack Smith has helped increase the number of baccalaureate programs at Miami’s regional campuses. Miami Regionals now offer over 30 bachelor degrees students can complete in Hamilton, Middletown and West Chester.

Womack Smith said the baccalaureate program was important for helping students’ education, and 84 students have received bachelor degrees from the program.

“It’s a huge process,” Womack Smith said. “But it was work that I really felt was important. I have seen for so many years on the regionals that there’s a lot of students who find barriers to coming to Oxford to finish the degree.”

In 2017, Womack Smith helped launch the English Studies major at Miami Regionals. She also served as the first director of Hamilton Campus’ Honors Program, the first faculty director at Hamilton and the president of Miami’s Phi Beta Kappa chapter since 2012.

Womack Smith said she enjoys all the service she does for the university.

“Service is what keeps the institution going,” Womack Smith said. “We’re doing the behind-the-scenes work that makes degrees possible … I actually really enjoy service work, especially now that I’m at the stage where I can choose the kind of projects I’m passionate about.”

Moira Casey, the regional associate dean for Academic Affairs, said Womack Smith is dedicated to all of her roles.

“I’ve worked with her for a long time, and she’s always been very generous with her time,” Casey said. “She devotes an incredible amount of time to her students, to her colleagues in her department and to both internal and external work for the university.”

Casey also said Womack Smith’s devotion to the university and its students helped her win the award.

“One of her nominators for that award said that students love Whitney … and the reason they do is because she works so hard on their behalf,” Casey said. “She just really takes a lot of time and care with her students and kind of wraps them with support to make sure that they can be successful in her programs.”

Hay-Rollins, a professor and chair in the department of anthropology at the Oxford campus, created Miami’s Global Health Studies program in 2013 and founded the Global Health Research Innovation Center in 2015.

Hay-Rollins’ accomplishments also include leading a contact-tracing program for COVID-19 in Butler County and creating a project called Primed for Action to reduce infant mortality rates in the county.

Hay-Rollins appreciated the award but wanted other faculty members to be recognized for their work during the pandemic as well.

Ann Elizabeth Armstrong, an associate professor of theater, worked with Hay-Rollins on Primed for Action to create a video depicting the struggles of everyday families.

Armstrong said that after working with Hays-Rollins, she was impressed by the professor’s resilience.

“If a conflict came up, Dr. Hay-Rollins had no problem just jumping right in and either steering the ship in a new direction or just confronting head-on any kind of problem that came up,” Armstrong said. “She was very willing to be vulnerable in sharing her own experiences, but I think she had a way of building trust in the community, building relationships.”

Armstrong added that Hay-Rollins’ impact doesn’t only show in the community, but also on Miami’s campus.

“She has a very close relationship with her students,” Armstrong said. “I really love the way in which she gave students leadership opportunities.”

Hay-Rollins said that her successes, which led to her receiving this award, could not have happened without the rest of her staff.

“None of us are an island,” Hay-Rollins said. “I deeply appreciate being recognized for all of the work that I have done. All of my colleagues are also doing a lot of really good work and service.” 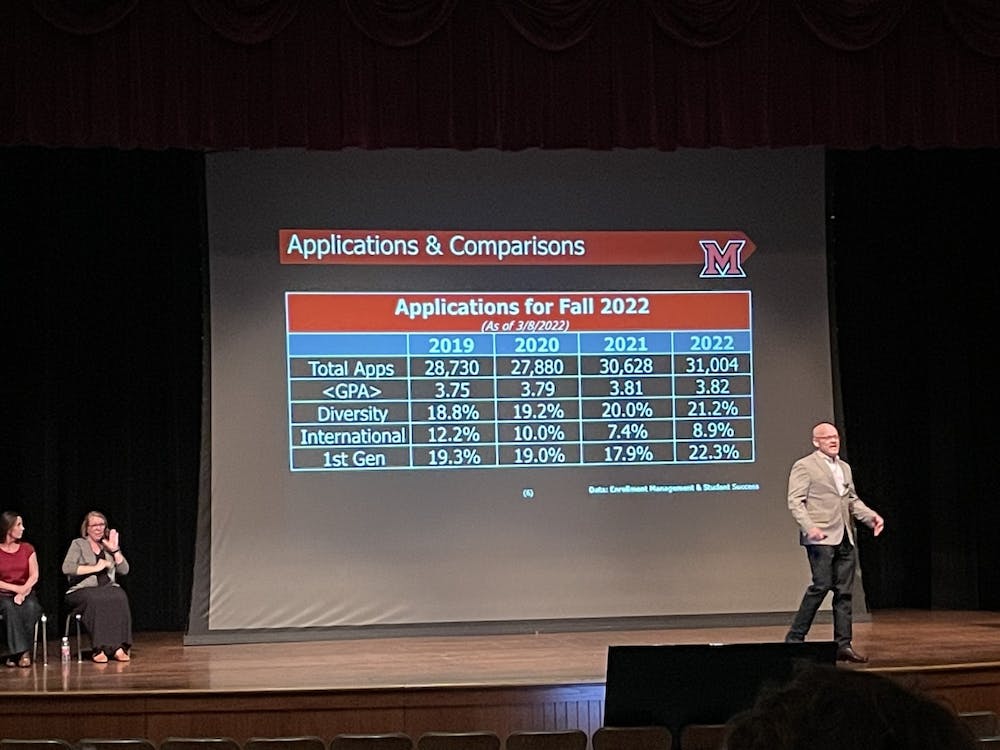