A win is a win. Even if it’s against the worst team in the Mid-American Conference (MAC).

The Broncos, who still haven’t won a game in conference play, led at halftime. But junior guard Dae Dae Grant proved too much to handle, as his 25 points propelled the RedHawks to victory.

The win snapped Miami’s five game losing streak, which had seen them fall to 3-8 in MAC play.

The RedHawks currently sit in ninth place in the MAC standings. This is a problem, as only the top eight teams in the league get a bid in the conference tournament in March.

Saturday’s game will be a good opportunity for Miami to move up in the standings. The RedHawks face off against the Bowling Green Falcons, who are in eighth place in the MAC. If the ’Hawks beat the Falcons, they’ll leapfrog BG into a projected MAC tournament appearance.

In the teams’ first matchup in Bowling Green, the RedHawks led by nine at halftime before the Falcons came back and forced overtime, winning 87-83 in the extra period.

In that game, Grant scored 26 points while senior forward Dalonte Brown poured in 24.

Brown is still out of the lineup after an ankle injury against Ball State on Jan. 25. Head coach Jack Owens would like to get Brown back as soon as possible, but there’s no timetable for his return.

“I have no idea when he’s returning,” Owens said when asked about Brown’s return. “We would love to have him. I’ll tell you this: when he’s available, I promise you’ll see him.”

Tuesday night’s game was the third contest in five days for the RedHawks. Owens is ready for the team to get a few days’ rest.

“It’s been a grind,” Owens said. “It’s good for the guys to get a day off and be able to prepare for two days before we get BG.”

Senior guard Mekhi Lairy had been in a slump recently, as his spot in the starting lineup was taken by fellow senior guard Isaiah Coleman-Lands. However, Lairy’s production has seen an uptick in the last few games.

In Sunday’s contest against Akron, Lairy scored 27 points on an efficient 10-of-17 shooting night. On Tuesday, he scored 11 and dished out six assists. The change in scenery may have given Lairy the motivation he needs to play better in the final stretch of the season.

In Brown’s absence, first-year forward Curtis Harrison IV is likely to get another start. Harrison IV has started three of the four contests he’s played in since Brown’s injury. 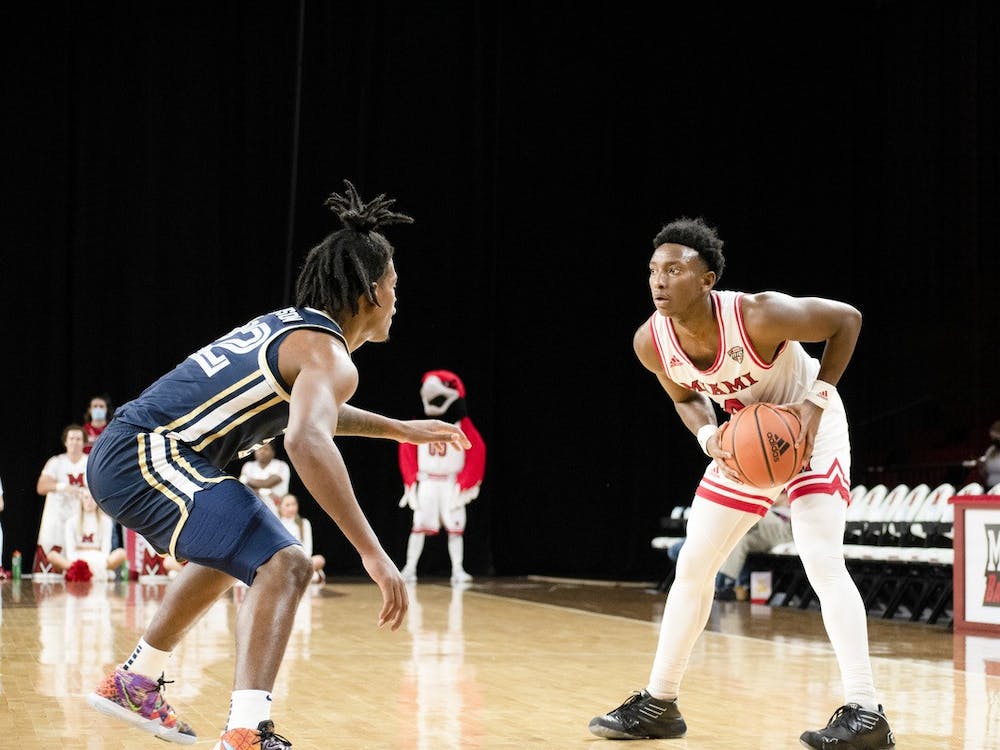 It’s hard to beat a team twice in a row in any sport, let alone Division I college basketball. But after beating the Miami RedHawks 66-55 at home on Friday, the Akron Zips traveled to Oxford Sunday and did it again, 71-59.