The student section was packed as high as the eye could see to watch the RedHawks play the Bearcats in Millett Hall for the first time since 2010.

The fans left the arena disappointed despite a solid effort from the RedHawks. The team lost, 59-58, after a tip-in from senior Precious Ayah rolled out.

That year, future NBA player Wally Szczerbiak led the team to a Sweet 16 berth in the NCAA Tournament. Cincinnati senior Abdul Ado and head coach Wes Miller both agreed this Miami team could follow in their footsteps.

“It wouldn’t surprise me if this team is playing in the NCAA Tournament in March,” Miller said.

Cincinnati started the game with an 8-2 run as guards John Newman III and Jeremiah Davenport each made a 3-pointer. The Bearcats led 12-6 after the first media timeout.

Senior Dalonte Brown took over after the break. Brown made a jump shot, then got fouled while shooting a three. Uncharacteristically, he missed all three free throws, but that didn’t deter him. Brown got a dunk in transition and then made a shot from behind the arc a few plays later.

Both teams went cold after that, and it took almost three minutes for either team to score. Finally, senior guard Mekhi Lairy drained a 3-pointer to give the RedHawks their first lead of the game.

From there, the rest of the half was back and forth. Ado dunked the ball to put the Bearcats up by 27-24, but Lairy answered with another 3-pointer to tie the game with just under four minutes left in the half.

Both teams endured another cold spell after that. Neither team would score again until under a minute left in the half, when Lairy found Grant for a layup in transition.

Junior guard Jeremiah Davenport made a three in the closing seconds of the half to give Cincinnati a 30-29 lead at halftime.

Neither team could gain separation at the beginning of the first half.

With the game tied at 37, Miami made its run. Grant drove inside for a layup to put the RedHawks up by two. The next possession, he grabbed an offensive rebound and kicked it out to Brown for a 3-pointer.

Another triple by Lairy gave Miami an eight-point lead, its largest of the game.

The Bearcats wouldn’t go quietly, though. After a jumper by redshirt junior Myja White made the score 47-41, Cincy made its run.

Davenport made two 3-pointers to tie the score, then a jump shot to put the Bearcats up by two. A dunk by redshirt first-year Viktor Lakhin capped a 12-2 run by Cincinnati and gave the team a 53-49 lead.

With Ayah in foul trouble late in the game, Miami head coach Jack Owens had to turn to first-year Curtis Harrison for key minutes late in the game. Harrison rewarded him by drawing a fifth foul on Lakhin, sending him to the bench with a little more than three minutes to go.

Harrison made both free throws to cut the deficit to two points.

The rest of the game was back and forth. Facing a four-point deficit, Lairy made another three to cut Cincy’s lead to 59-58 with 48 seconds left. The RedHawks needed just on stop to get the ball back.

Offensive rebounding killed Miami at the end of the game. Junior guard Mika Adams-Woods missed a 3-pointer, but Adu grabbed the rebound, his seventh offensive rebound of the contest.

He passed it out to a Cincinnati guard, who quickly called timeout. The Bearcats inbounded to Ado, who was fouled.

Ado missed the free throw, but the rebound fell into the hands of Davenport. Brown reached for the ball, and a jump ball was called. The possession arrow pointed Cincinnati’s way, so the Bearcats still retained possession.

It was the 22nd offensive rebound of the night for the Bearcats, who grabbed 48 total rebounds to Miami’s 36. Cincinnati enjoyed a noticeable height advantage over the RedHawks, and used it to their advantage.

“We always try to dominate the other team on the glass,” Ado said.

Miami allowed the Bearcats to burn a few seconds off the clock before fouling Adams-Woods. Cincinnati was still in a one-and-one situation, meaning Adams-Woods had to make the first free throw to be able to attempt the second one.

He missed, leaving Brown to collect the rebound. He passed it to Lairy, who quickly dribbled up the court.

Lairy threw the ball away, but Brown was in the right place at the right time. He collected the ball and threw up a wild shot with just a few seconds left.

The shot missed, but there was enough time for one more attempt. Ayah grabbed the miss and put up one last shot just a few feet from the basket. The putback was tough, but makeable.

Unfortunately for the RedHawks, the shot missed and the buzzer sounded on a hard-fought 59-58 defeat.

Lairy was the leading scorer for both teams in the contest with 20 points. Though he only made seven of his 20 shot attempts, he converted 4-of-9 tries from behind the arc.

After the game, a noticeably dejected Lairy was unhappy with the team’s performance on the glass.

“They just wanted it more than us, especially towards the end of the game,” Lairy said.

Lairy was one of only two Miami players to make a 3-pointer in the contest, the other being Brown. Shooting has been a strength of the team so far this season, but the team went cold tonight, making just six of its 22 attempts.

The Bearcats didn’t fare much better shooting the ball. The team made nine of its 33 attempts from 3-point range and just two of its 10 shots from the free-throw line. Both teams shot less than 40% from the field.

Both coaches noted the loud atmosphere at Millett Hall for Wednesday night’s game.

“This is the best it’s been since I’ve been here,” Owens said.

“You couldn’t hear yourself.”

“I think our fans and our students, they see we have a good product now,” Owens said. “So I think they’ll come back.”

Miami’s next home game isn’t until Dec. 18 against Bellarmine, but students will have to wait until the team’s Feb. 1 contest against Kent State for a home game during the semester.

After a tough loss to the Bearcats, the RedHawks will travel to face the Indiana State Sycamores this Saturday. The game tips off at 1 p.m. and will be broadcast on ESPN3. 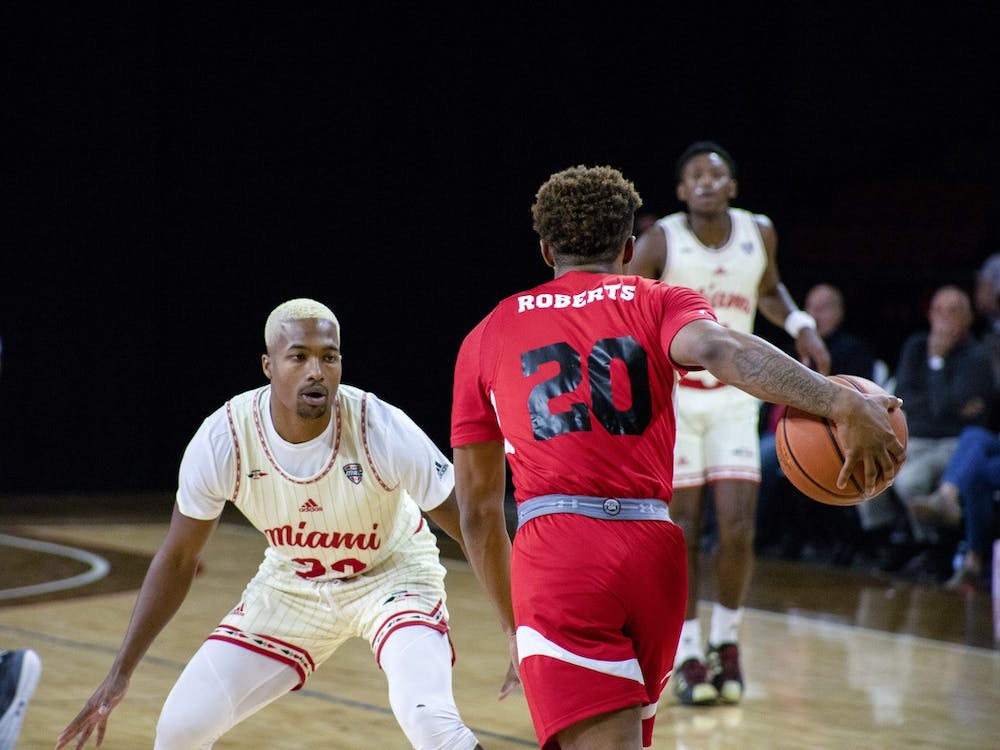