“It’s almost been a miracle to me”: How one local shepherdess built her flock

It was National Farm Safety and Health Week when the anaesthesiologist put Bethany Cantwell under for her surgery on Sept. 22.

The injury? A trifecta of torn ligaments in her leg – ACL, LCL and meniscus – plus a fractured tibia.

This summer marked the first time Cantwell and her husband, Seth, lived on-site with their animals – a flock of chickens, two pigs and about 60 sheep, though only the lambs born this year are currently living in the Cantwells’ new barn.

Cantwell, a fifth-generation farmer, met her husband while living in the Cincinnati suburbs and attending law school at the University of Dayton. She lived on a third of an acre, enough to tend a garden and keep a few chickens as a hobby.

“I was doing a lot of things that were very peaceful and calm to me, and therapeutic in a way,” Cantwell said. “It was a way to destress from law school.”

As her hobby progressed, Cantwell missed the sheep she grew up with at home. In 2015, the pair decided to lease land near Oxford to start Aurora Blue Farm and build their flock.

The jump from law school to farming was natural for Cantwell.

“There’s a lot of rules and regulations involved with [farming], so having a legal background was very beneficial and less intimidating, I would say, to getting started in a business,” she said.

At first, Cantwell focused on Katahdin sheep, which don’t have to be sheared. At her height, she maintained a flock with 65 ewes, mature breeding females.

A couple years ago, she switched her flock over to primarily Icelandic and Jacob sheep, both breeds that need to be sheared twice a year. The shift meant she had to build her flock up to a sustainable number of ewes, and she left the Oxford Farmer’s Market just as the pandemic began.

Early this year, the Cantwells started looking for a permanent home. They were living near the Black Covered Bridge in Oxford while their flock lived on a leased farm near Hamilton.

In April, Cantwell saw what would become her home for the first time: a house, a barn and a few more structures surrounded by acres of fields. The backyard had two pear trees.

“Eventually, I would love to have a full farm-to-table dinner here at the farm,” Cantwell said. “We have a garden space now that I can have that’s gonna be … probably a quarter acre just for our own consumption.”

Her family moved into their new home in July and brought with them their chickens, the two kunekune (“coo-knee coo-knee”) pigs and the youngest lambs to start making her visions reality.

“It’s almost been a miracle to me, having always rented farms from other people and always working with what they have established,” Cantwell said. “It is a breath of fresh air to come to this barn … This barn is like the perfect, perfect barn, and now coming to our own place and having farmed for so long, you envision exactly what works and what doesn’t.”

On August 20, the couple closed on the property.

On August 25, Cantwell pulled out a ladder out to one of the pear trees. A few pears in, the ladder collapsed, and Cantwell ended up sprawled on the ground.

She said she heard a pop come from her leg and knew it was bad.

At first, Cantwell thought she was just facing a fractured bone. When she realized the damage was more severe, though, surgery became inevitable.

“It could have been my back, or I could have hit my head,” Cantwell said. “I could have done all different sorts of things. But it was mentally harder on me because I wasn’t out here doing all the chores every day since this happened.”

Cantwell’s typical day involves caring for dozens of animals. To feed the lambs, she has to climb a ladder and throw down hay from a loft, a task that’s impossible in her leg brace, so her husband has picked up responsibilities while she recovers.

On her farm, Cantwell makes sure every part of her animals are used. Her Icelandic sheep produce milk, and she uses the wool from her sheep to make dryer balls. She cleans and sells sheep skulls and tans skins, a process she wrote a book and teaches courses on, sometimes as far away as Martha’s Vineyard and Delaware.

Part of Cantwell’s job includes saying goodbye to members of her flock.

When Cantwell takes a lamb to the butcher’s, it’s an all-day affair. Between loading the lamb, driving an hour-and-a-half to the nearest butcher and waiting, the ordeal adds up to a minimum of four hours.

At the butcher’s, she picks up sheepskins and skulls from other farmers, part of her philosophy on using every product an animal has to offer.

“It’s always the hardest to explain to someone who doesn’t farm,” Cantwell said. “It’s not necessarily a happy day … What I feel good about, though, is that they’ve lived a good life on this farm, and we have given them the utmost care that they deserve, and they’re going to feed a family or multiple families.”

Cantwell really does have a deep care for her animals. She can walk out among her flock and tell you the stories of each individual sheep.

Andromeda, one of her smallest lambs, was born a twin to mother Ali, but Ali rejected her after three days, so Cantwell raised Andromeda from a bottle in her home.

Bernice was born this year to mother Beatrix, whose own mother Bettie Jo just had twins Bernadette and Burt. Burt and Beatrix love to make friends, but Bernadette would rather live and let live.

Polly was tiny when she was born, earning her the name after Polly Pocket. Now, she’s pregnant and one of the biggest sheep on Cantwell’s property, though most of the ewes and breeding males are still next door in a different barn until the previous owners can harvest their fields of soybeans that take up most of the land.

“I’ve kept sheep longer than I should have … because I felt so guilty about taking them, but you have a duty and a responsibility to be an ethical farmer,” Cantwell said. “At the end of the day, what we do is they’re either staying here for their wool or for their meat … I know that what they’re getting is a good quality of life here out on pasture, exactly how they’re supposed to be living, in the sunshine, in the grass.” 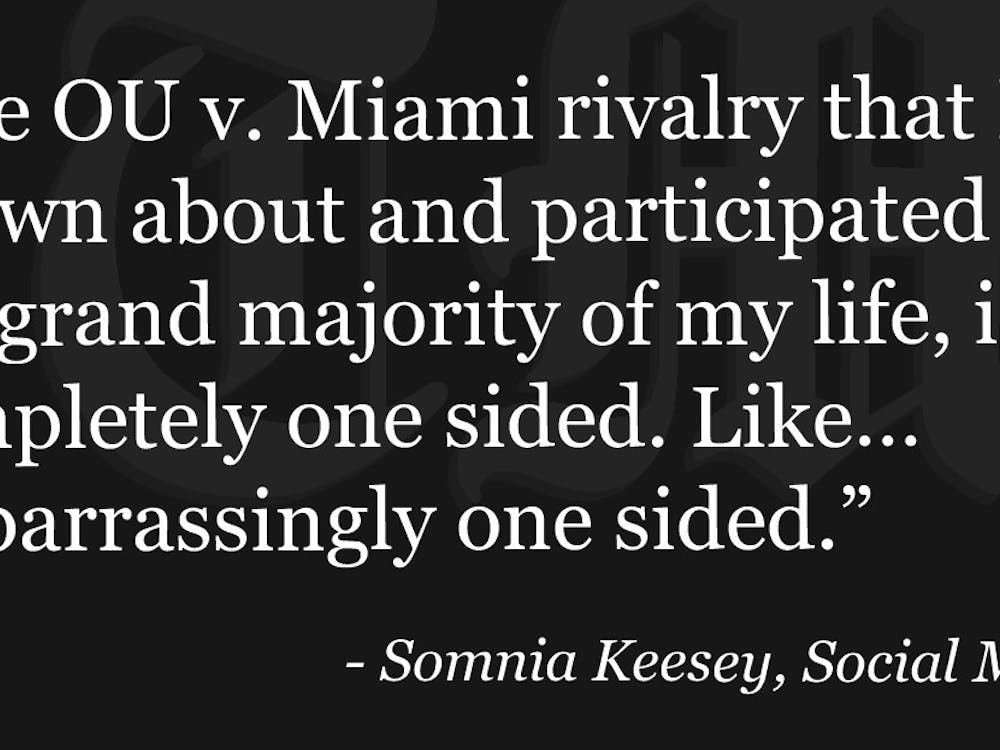 Ohio University is obsessed with us … trust me I’d know

The OU v. Miami rivalry that I had known about and participated in for the grand majority of my life, is completely one sided. Like … embarrassingly one sided.