Ah, college illness. It wouldn’t really feel as though we were back at school without the orchestra of sniffles, sneezes and coughs in every lecture hall.

It seems like every year, people get sick within the first month of school. When I was a freshman in September of 2019, I got the flu and bronchitis back-to-back and missed a week and a half of classes. It sucks, but it’s normal — the “college petri dish,” as they call it.

Well, welcome to a college post-pandemic-peak. We’re masked up in classes, Armstrong and uptown businesses. Hand sanitizer is still a hot commodity and many professors have plexiglass set up between themselves and their students. We social distance when we can, though that’s still not too often.

But no one is required to wear masks at off-campus house parties or during outdoor activities. We’ve moved out of our idea of a “bubble” and are now hanging out and catching up with friends we haven’t seen in over a year, just because technically, we can. And because of that, the college petri dish is back with a vengeance.

Of course, COVID-19 is still going around, and so are strep throat, the flu and the common cold. I think we were in a pandemic so long that we forgot that other illnesses exist, but the illnesses didn’t forget about us, that’s for sure.

Two weeks ago, I caught that common virus that’s been spreading across campus like a wildfire. I’ve heard many names for it. YikYak seems to be calling it “Crawford-19,” after President Crawford. A fair amount of my fellow marching band members came down with it as well, calling it the “Presser Plague” after the music building Presser Hall. And of course there are more.

It left me laid up in bed for three days, coughing up a storm, running a low-grade fever and going through three separate boxes of tissues like I was Taylor Swift after a breakup.

Two weeks later, I still have the cough, though I’m no longer contagious — I just had bad lungs to begin with, and getting sick didn’t help them breathe any easier. For a while, every time I coughed in class, I would get looks from some of my classmates, and I just wanted to scream: “It’s not COVID! I’m not going to get you sick!”

I couldn’t scream if I wanted to, though, because I also lost my voice due to the virus. Whoops.

Still, every cough could be COVID and that’s enough to scare anyone. So, I sort of understand.

I’ve started getting better, but then last Wednesday, I woke up slammed with yet another health issue: pinkeye. Out of absolutely nowhere.

I made a makeshift eye patch out of adhesive moleskin and a clear, sticky bandage, then went to class armed with double the amount of hand sanitizer as usual and a pair of dark sunglasses

behind which I could hide. Student Health Services was booked until the weekend, and I live all the way across campus from Urgent Care and have no car. That was about as much as I could do.

My friends all made fun of me about it, of course. I was dubbed “the pirate” for a bit until the pinkeye cleared up, and everyone gave me a wide berth (for good reason). It was annoying for sure, but also pretty funny.

There’s also the fact that the autumn allergy season is in full swing, so my allergies hate me right now.

So here I am: coughing, sneezing, sniffling and sporting the most stylish eye patch since Ragetti in Pirates of the Caribbean. I feel like everything is three times as worse as normal because we didn’t have as much spreading of everyday illnesses last year, so this year, sickness is making its unfortunate comeback. And for someone like me who gets sick a lot anyway … well, it’s no fun, that’s for sure.

I definitely was not prepared for this — to get so sick, so much, so soon. I don’t think anyone was, truly, after a year by ourselves avoiding all of the common colds and coughs. That’s why Student Health Services is so booked up right now, and why all of the daily Urgent Care appointments are gone by 10 a.m.

Maybe it won’t take too long, though, since we’re all getting so sick right now anyway. But we should have expected it returning to Miami for a semi-normal fall semester.

After all, such is the college petri dish. 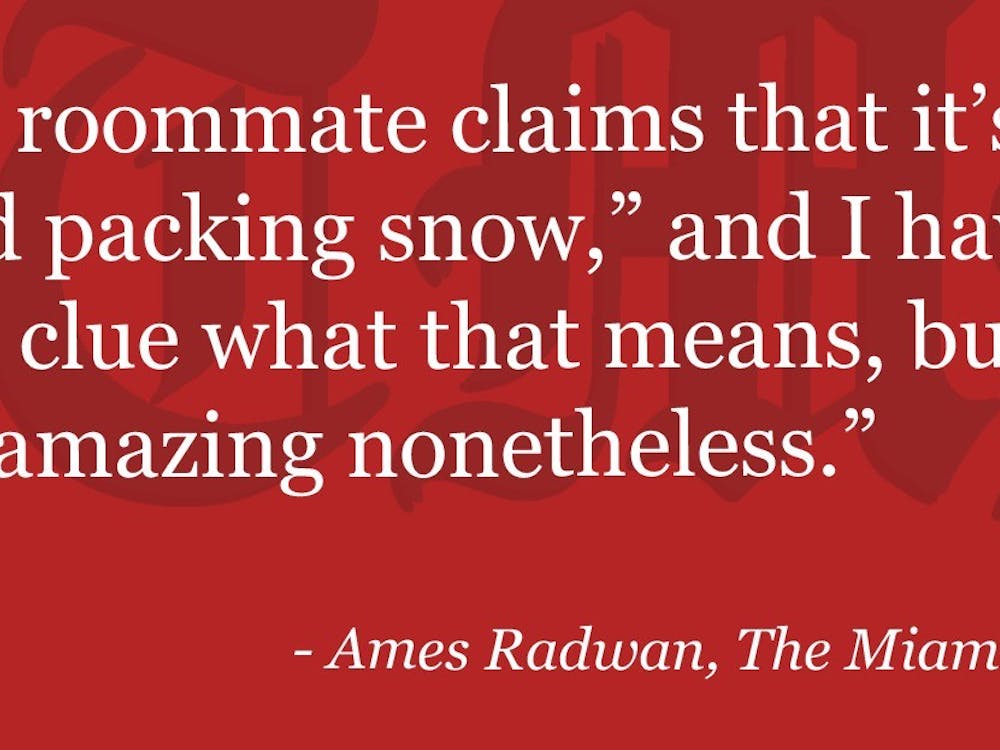 I pressed myself to the window and just watched, wide-eyed and open-mouthed, as these gigantic, fluffy snowflakes hurtled down toward us from the sky above. It was the most ethereal thing I had ever seen.