Barely three minutes later, Negrete Garcia scored one of her own. She dribbled around the Fernsler and slid the ball into the open cage. Her sixth goal of the season extended the team’s lead to two.

The score would remain 2-0 until midway through the third quarter. During a penalty corner, Luli Rosso, a sophomore midfielder, inserted the ball to senior midfielder Leonor Berlie. Berlie found standout senior forward Allie Grace Joyner (more from her later), who drove home her first goal of the weekend.

Defense prevailed the rest of the game. The score would finish at 3-0. Miami dominated in all facets of the game, with 21 shots (13 shots on goal) and eight penalty corners. Sophomore goalie Isabele Parese only had to make two saves in the contest, and the ‘Hawks held Kent State to one penalty corner.

Late in the first quarter, Berlie scored on a penalty stroke to put Miami up, 1-0.

Then, just under two minutes into the second, the RedHawks found the back of Kent State’s net again. Joyner received a pass from Peña, took two steps to her right, then scorched a ball past Fernsler.

The ‘Hawks extended their lead to three less than a minute into the second half, when Joyner scored once again. She flicked a ball into the net off a pass from junior midfielder Noor Breedijk.

For a few minutes, Kent State threatened to come back. The Golden Flashes mounted pressure on Miami early in the second half, and finally senior backer Emma Bressler drilled a shot past Parese late in the third to cut the Miami lead to two. The comeback campaign wouldn’t last long, however.

Less than three minutes into the fourth quarter, Joyner finished the hat trick. Berlie punched a shot toward Kent State’s net, and Joyner got her stick on it. Her deflection jumped over the outstretched paddle of Fernsler to make the score 4-1.

The Golden Flashes would tack on one more goal with less than a minute remaining in the contest. The game ended 4-2.

Once again, Miami dominated Kent State. The ‘Hawks lead in shots 20-6, and 15-6 in shots on goal. The team also earned six penalty corners, while Kent State had only two.

The hat trick was the first of Joyner’s career, and with it she tied Negrete Garcia for the team lead in goals, with six.

With the weekend sweep, the RedHawks remain undefeated in conference play, and figure to move up in national rankings this week. Miami also remains atop the MAC, and is three games ahead of second-place Appalachian State.

Next weekend’s series against Central Michigan University has been postponed, so Miami field hockey’s next game action will be in two weeks. The team plays Appalachian State at the Miami Field Hockey Complex in Oxford. Friday’s game starts at 2 p.m., and Saturday the teams will face off at 1 p.m. 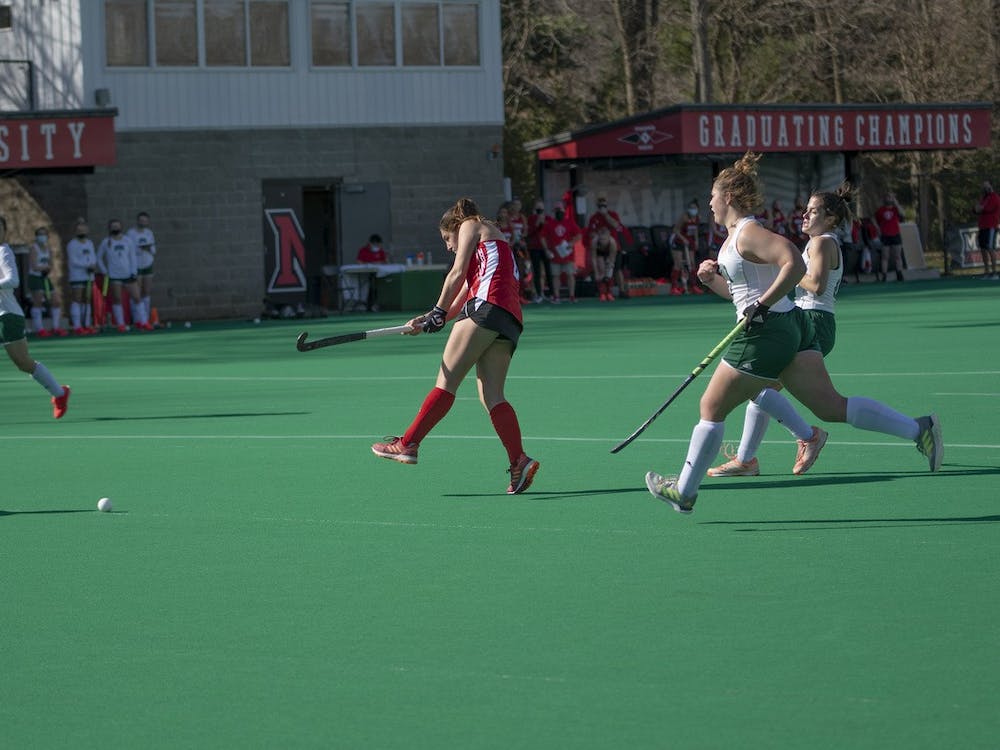