There’s no fooling the RedHawks in the beginning of April, as Miami’s baseball team swept its series with Eastern Michigan University this past weekend.

Miami won its first game 4-3, as well as both games in Saturday’s doubleheader, 5-0 and 4-1 respectively.

The RedHawks went out with a bang with a 5-4 win Sunday.

A home run secures a win

In Friday’s series opener, Miami scored three of its four runs in the second inning.

Miami scored one more run in the fifth inning.

Second baseman Will Vogelgesang reached first base on an error made by Eastern Michigan’s third baseman and advanced to second. Left fielder Dalton Back drove Vogelgesang home with an RBI single.

The Eagles slowly tried to catch up throughout the game. They scored one run in the fourth inning on a triple and a sacrifice groundout, then another run in the fifth inning with a hit-by-pitch, a double and a sac fly.

Eastern Michigan scored its third run in the seventh inning with a walk, a sacrifice bunt and a score on a wild pitch.

The RedHawks shut the Eagles out and scored all five of their runs in the first two innings in Saturday’s first game.

In the first inning, center fielder Benji Brokemond doubled but was later called out at home. Back was hit by a pitch and stole second, and right fielder Nate Stone walked. Back then advanced to third and later scored on an error made by the Eagles’ catcher.

Andrews and catcher Nate Stolze were hit by a pitch which loaded the bases. Shortstop Tyler Wardwell hit a three-run single, as the RedHawks were able to score on a bad throw.

In the second inning, Morissette hit a solo leadoff home run to extend Miami’s lead to 5-0.

The team had enough energy to pull out another win for the second game on Saturday.

In the first inning, the RedHawks got an early lead and put two runs on the scoreboard. Brokemond and Vogelgesang singled, and Brokemond later scored on a wild pitch. Andrews then hit an RBI single.

After two strikeouts from Stone and Andrews, it looked like the Eagles were going to have it easy in the fourth inning. Miami squeezed another run in as Stolze doubled and Wardwell hit an RBI single.

In the fifth inning, the RedHawks produced one more run. Vogelgesang was hit by a pitch, Back singled and Stone hit an RBI double.

Eastern Michigan was able to get one run on the scoreboard in the seventh inning with a double and an RBI single.

The RedHawks took an early lead again in the first inning. Brokemond singled on a bunt. Vogelgesang hit an RBI double and later scored on another RBI double from Back.

Eastern Michigan put one run on the scoreboard with a single, a walk, an advancement from a throwing error and an RBI single.

Miami extended its lead to 3-1 in the third inning. Stone walked and Andrews was hit by a pitch. Wardwell singled and Stone scored on a throw.

The Eagles caught up and took the lead in the third and fourth innings. In the third inning, they tied the score with a walk, a double, a sacrifice groundout, a hit by pitch and an RBI single.

In the fourth inning, Eastern Michigan took the lead, 4-3, with an advancement on a wild pitch, a walk and score on another wild pitch.

Miami took the lead again in the fifth inning, as Stone tripled and Andrews hit an RBI single and advanced to second base on a wild pitch.

Pinch hitter Nick Neibauer walked and Morissette singled to load the bases. Zapp reached on a fielder’s choice to get Andrews out at home. Brokemond walked to bring in another run to make the score 5-4, RedHawks.

The ’Hawks take on Western Michigan University this weekend. Their four-game series starts this Friday at 5 p.m. 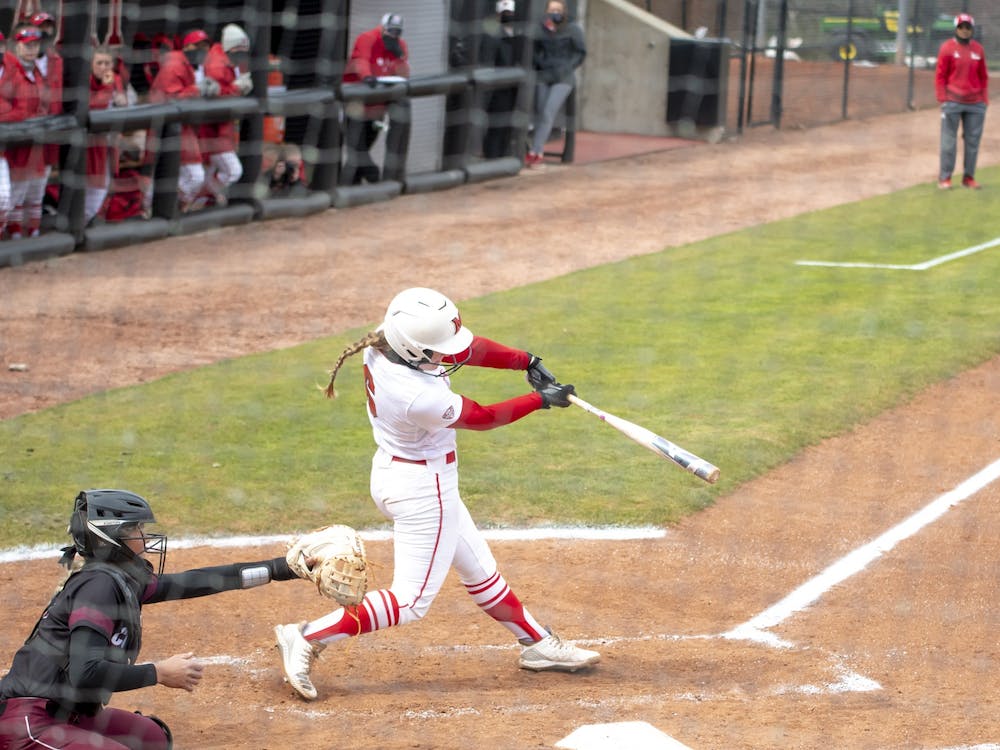