Zak and his business partner Selom Agbitor, both alumni from Miami’s class of 2019, earned themselves a $500,000 investment in their company, Mad Rabbit Tattoo, which they started with just $600 as a side-hustle at Miami a few months before graduating.

Their deal with Cuban, which aired on March 26, was filmed in October 2020 for an episode of “Shark Tank,” and with a 12% stake it values the company at around $4.16 million. Before settling for Cuban’s deal, they sought a $500,000 investment for a 5% stake in the company, confident that they’ll see $10 million in revenue in their business’s third year.

At Miami, Zak and Agbitor met in the Delta Sigma Pi business fraternity during the spring of their first year. They made their first venture into e-commerce together in their junior year, selling swimsuits that they had shipped from China in a business they sold before launching Mad Rabbit in January 2019.

At the time, they had no clue what would become of the startup.

“I honestly couldn’t predict that we’d be on ‘Shark Tank,’” Agbitor said. “I thought that it would start off being a low-key side hustle, and then before graduation things started to pick up, and I was like, ‘This is becoming real, and this has a chance of replacing our full-time jobs and becoming the next big thing.’”

Zak said the lack of an on-brand solution for tattoo care brought them into the market, but something else made them stay.

“What we’ve found to be far more compelling is actually the tattoo community,” Zak said.

He said Mad Rabbit aims to be a “storytelling brand” for the community, and the Sharks referred to it as “the cool tattoo brand.”

The two young co-founders give credit to their time at Miami’s Farmer School of Business (FSB), where they both majored in finance and minored in integrated media studies. They said FSB prepared them to start and manage a quickly-growing company.

“It definitely taught me how to work closely with people,” Zak said. “I think it’s a really important skill set that you can’t learn unless you’re working under pressure.”

The Sharks were impressed by the skills Zak and Agbitor showcased, lauding them for their business model and the results they had produced.

“I have a lot of respect for you dudes,” Kevin O’Leary told them.

O’Leary was the only other Shark to make Zak and Agbitor an offer, but not because no one else was interested. Barbara Corcoran and Daymond John both backed out, saying they didn’t see how they could help make Mad Rabbit any more successful.

For Tim Holcomb, FSB’s chair of entrepreneurship and director of the John W. Altman Institute for Entrepreneurship, Mad Rabbit’s success is a wind in his sails.

“I’m excited,” Holcomb said. “I think it’s a great microcosm of the experience that undergraduates get at Miami.”

Holcomb has been working with Mad Rabbit on their business model since January 2020.

“We feel a lot of pride in the success that our graduates have in the real world,” Holcomb said.

Mad Rabbit continues to grow, releasing new products and watching the ticker on its website count up “tattoos preserved.” 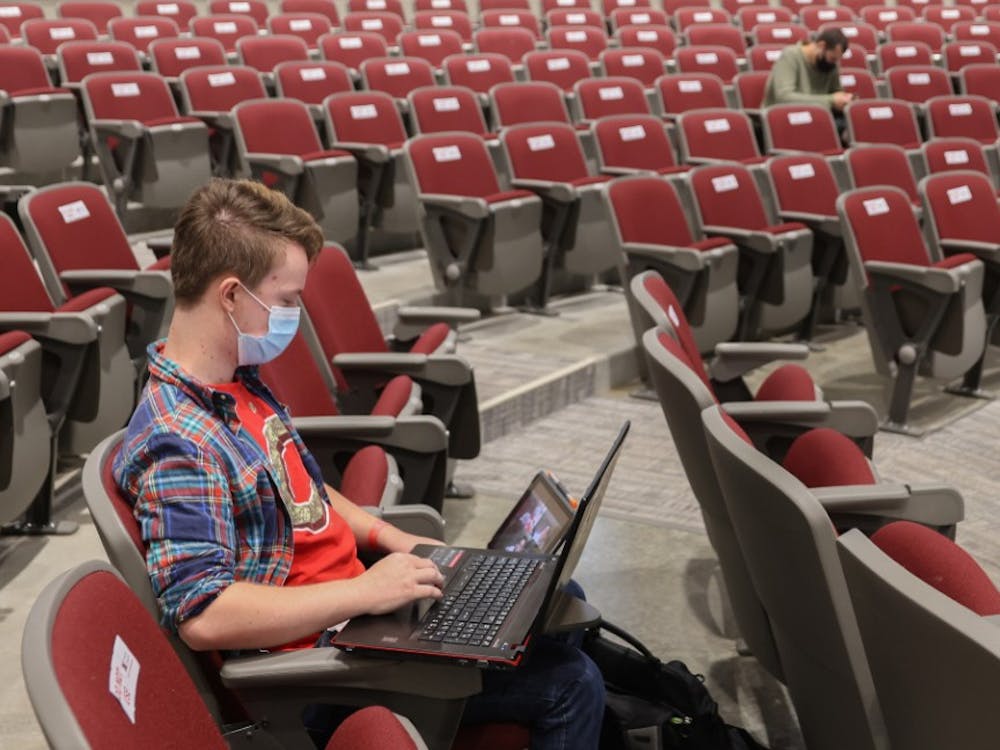 For Miami University photographers Jeffrey Sabo and Scott Kissell, typically their job is to document Miami’s year-to-year history. But this past year, the abnormally empty spaces that filled their pictures emulated the experience of living through a once-in-a-lifetime event.