Concrete, the photograph and white noise are some of the individual objects being highlighted at Miami University Humanities Center’s lecture series titled “Objects that Changed the World.”

Tim Melley, Geoffrion Family Director of the Humanities Center, said the virtual lecture series was created with two goals in mind: to reconnect with Miami alumni and to showcase the importance of the humanities.

“We wanted to do a series for our alumni and invite them back to Oxford, virtually, to come back to the classroom,” Melley said, “and we thought a really good way to do that would be to offer lectures that are about transformative human creations.”

The idea to focus on specific objects came from Pepper Stetler, associate director of the Humanities Center.

“We just thought objects were things that were very accessible to an audience — they could be clearly explained, and it would be something that a broader audience might be interested in engaging with,” Stetler said.

After coming up with the  concept, Stetler said the individual events were easy to plan because they’re all virtual. She approached humanities faculty members to ask them to participate, as well as the Alumni Association to connect with their established audience of alumni.

“There was a lot of enthusiasm,” Stetler said. “I think faculty are really enthusiastic about the opportunity to show how relevant humanities research is to our world today and the challenges that we face, but also to show their abilities to translate their academic work to a non-academic audience.”

Kimberly Hamlin, associate professor of history and global and intercultural studies, presented a lecture on Wednesday, March 31 on the birth control pill.

She thought doing a series focused on these transformative objects was a great idea, and she chose the birth control pill because it’s something that changed nearly every aspect of women’s lives when it was invented.

“It tells us about politics, gender, medicine and the way in which women’s political autonomy is often linked to our reproductive autonomy and vice versa,” Hamlin said.

Other objects in the series have included icons, blues music, concrete and the photograph. Upcoming lectures are about porcelain, the Model T, earthworks and white noise.

Melley said talking about these objects that we sometimes take for granted in detail can remind people of why the humanities are an important subject.

“One of the goals here is just to remind our alumni of why the humanities matter and what our humanities faculty do,” Melley said. “And we want to remind them that these are amazing teachers and scholars who have incredibly deep knowledge of the human experience, and just taking a single object and explaining that can really demonstrate and put that on display for them.”

Melley said that between 100 and 200 alumni usually attend these lectures, which have been occurring every Wednesday since Feb. 24. He and Stetler hope that alumni who attend will get more involved in the Humanities Center, whether through attending more events or donating.

“This is a way of connecting to people that might want to support the Humanities Center and be involved in it in some capacity,” Stetler said.

The next lecture in the “Objects that Changed the World” series will occur on Wednesday, April 7. Assistant professor of art and architecture history Michael Hatch will present on porcelain. 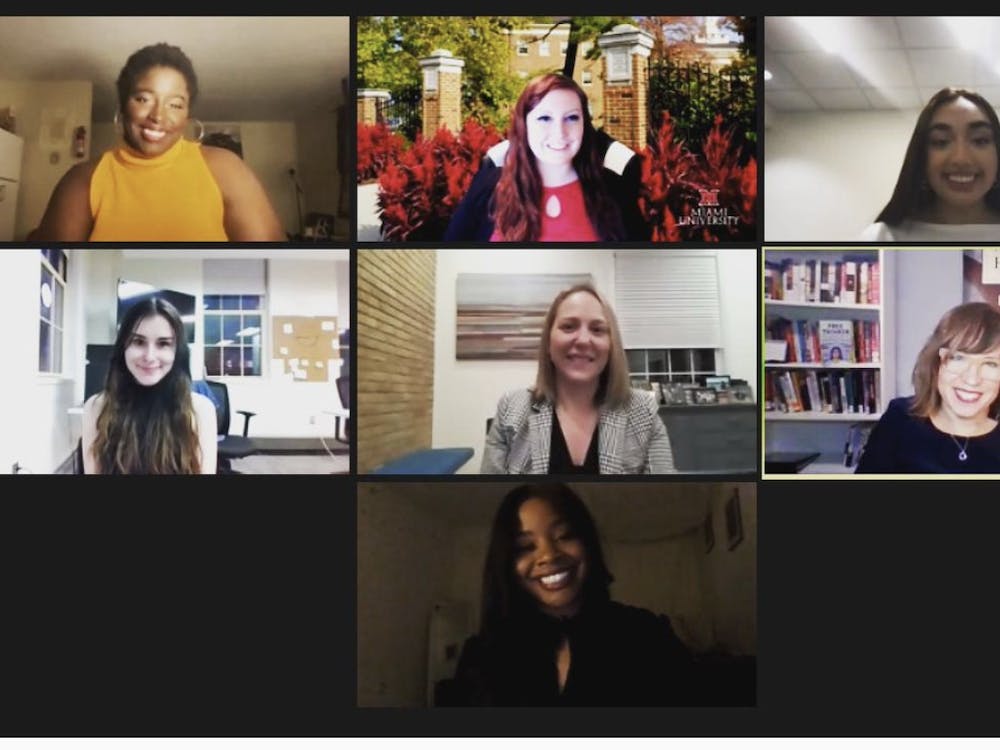 Seven women received recognition at Miami University’s Women of Excellence Virtual Celebration on Wednesday, March 31 for their leadership and dedication to the Miami community. The recipients, including three faculty members and four undergraduate students, were nominated for recognition by their classmates and colleagues.

Miami University’s new virtual event series, “Dialogues Concerning Democracy,” began on Feb. 22 with a lecture on the roots of the Jim Crow era.