Through the pandemic and poor weather, Miami University’s Hammocking Club is persevering.

The club was founded by a group of friends back in 2017, and although they’ve all since graduated, current club members have kept their community alive.

On any given sunny day, hammocks can be spotted all around Miami’s campus, with students doing homework, talking with friends or even taking a nap in the sun.

“I can always tell what the weather is like just by looking outside [my window] because there will be four to five different hammocks set up,” said Hammocking Club President Keresa Murray.

Murray, a senior education major, said the Hammocking Club aims to provide a community for students who like hammocking, as well as information on prime hammocking spots around campus.

While the club had a tough year, Murray said members have still been able to find people to hammock with through the friendships they’ve made in the club.

“It's very much more of a community for people to connect ... and [have] that shared experience,” Murray said. “You can just say something in the chat and someone might show up.”

Recent meetings have been held over Zoom due to COVID-19 restrictions or rain, but members have stayed in touch with each other and planned outings through a group chat.

Murray said that oftentimes, a member will send a message in the group chat with the location they plan to hammock and invite other members. These informal meet-ups have become a key part of the club’s activities.

The club also has an Instagram page, @muhammocks, where students can reach out for information about the club. Murray said they recently even received a message from a first-year student asking about the best spots to hammock on campus.

While students can use The Hub or Instagram to get information about the club, Murray has also taken a more simple approach to recruiting new members.

“Last semester, I [would] walk up to people that were hammocking and just ask them if they were a part of the club,” Murray said. “I think a lot of people don't know much about it or don't know that it exists.”

When she’s not out recruiting members, Murray is planning future events for the group, including a possible hammock movie night or a camping trip. She also wants to partner with Miami EcoReps to plan a trash clean-up next semester.

“I [want to] extend just beyond hammocking,” Murray said. “Just take care of the environment and space that [we] are hammocking in, as well as just being socially conscious and aware of nature and the world around [us].”

Brenna Kernan, a senior marketing major and Hammocking Club social chair, said that she thinks part of what makes hammocks so popular at Miami is the campus itself.

“I don't think it would be as enjoyable if the campus didn't look the way it does,” Kernan said. “The environment is really conducive to having a good time while being in a hammock, and I just kind of think it's a good way to be outside. I think that's something that we're all looking for, especially once the weather's nice, because Ohio is so unpredictable.”

Kernan said her hammock has become one of her favorite places to do schoolwork.

“I always feel like I'm more productive and I actually enjoy doing work when I'm in a hammock,” Kernan said. “It just feels better.”

Klatt’s favorite spots to hammock on campus are Western Campus and Academic Quad, particularly near Upham Hall. He doesn’t often do homework in his hammock and instead uses it as a place to relax and de-stress.

“Typically I'm either reading or I'm taking a nap, and I think I’m more just [there] for the peacefulness of it,” Klatt said.

Like Kernan, Klatt said that he thinks the campus itself encourages people to hammock, as does seeing others hammocking.

“Our campus has a couple of pretty good natural spots, like Central Quad, [and] a lot of really good spots for hammocks,” Klatt said. “So people can walk by and just notice [people hammocking] and then pick it up themselves.” 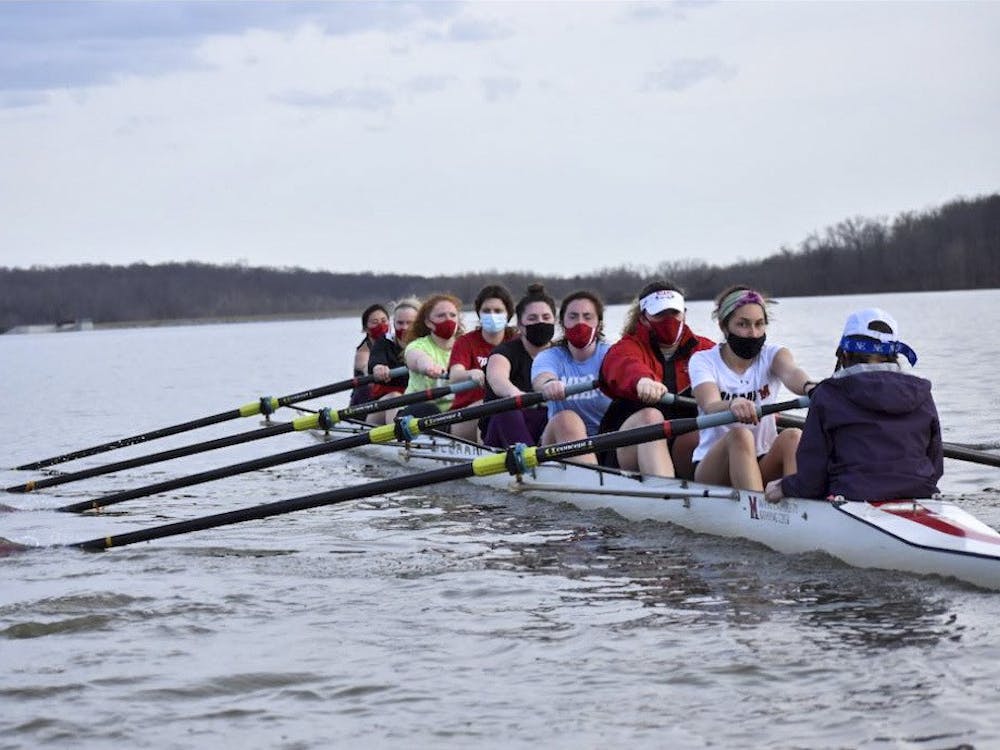 Student organizations enjoy the outdoors one year after being sent home

The sun is shining, the weather is warming up and Miami University student organizations are slowly beginning to meet in-person.