In a tense matchup on Thursday night, the Miami RedHawks defeated the top-seeded Western Michigan Broncos in volleyball.

In the first set, the RedHawks dominated. The team took an early 9-5 lead, and after the Broncos scored two points to catch up, Miami went on a 9-0 run.

From its fourth point in the set, Miami maintained the lead for the whole frame. A kill by senior right-side hitter Avarie Powell closed out the set, with the RedHawks winning it 25-14.

The Broncos quickly took a 6-3 lead in the second set. Blocks by freshman middle hitter Abby Stratford and Powell allowed the ’Hawks to close the deficit to 6-5. Minutes later, senior right-side Sarah Wojick tied the game at 7 with a block.

From there, both teams went back and forth taking the lead until a kill by sophomore outside hitter Lindsay Taylor put the RedHawks up 18-17. Miami didn’t look back, going on a 5-2 run to win the second set 25-19.

Early in the third, Western Michigan was up 9-8. Despite countless attempts by the RedHawks to take the lead, the Broncos led for the rest of the set, winning it 25-15.

Freshman middle hitter Maggie McCrary and sophomore outside hitter Allyson Severance helped Miami take an early lead in the fourth set. Both teams alternated on top until a kill from Severance put her team up 17-14.

On the game point, Western Michigan scored to tie the game 24-24. The RedHawks were determined to secure the win, and kills by Taylor and junior outside hitter Sophie Riemersma put them ahead 26-24.

Senior libero Abigail Huser tied a career high with two service aces and also finished with 23 digs. Wojick and junior outside hitter Gaby Harper both had 10 kills. Senior setter Morgan Seamen also had 10 kills with a huge 25 assists to finish the game.

After the game, head coach Carolyn Condit praised her team, but she knew they would have to maintain their energy for the next match.

“Tomorrow will be a dog fight,” Condit said.

Early in the first set, both teams alternated the lead until Western Michigan took advantage of an attack error by Miami, making it 9-8. From there, the Broncos were unstoppable, going on an 8-3 run to make the score 17-11. Although the RedHawks tried to close the deficit, that was the closest they got, falling 25-16.

The second set was much more balanced. Similar to the first, both teams went back and forth battling to maintain the lead, but an attack error by Western Michigan put Miami up 9-8. The RedHawks stayed on top for a while until the Broncos went on an assertive 12-9 run.

Miami was persistent and quickly regained the lead due to three back-to-back kills by Wojick, all assisted by Seamen. This sequence was not enough, as Western Michigan went on a 4-0 run to win the second set 25-23.

The third set started no different than the first two. The RedHawks maintained their persistence, and both teams fought to stay ahead. A kill by the Broncos put them up 11-10, and the RedHawks never saw the lead again. Late in the game, a kill by Riemersma put Miami within two, but it was not enough. Western Michigan won the final set 25-23.

Despite getting swept 3-0 on senior day, it was the seniors who showed up for Miami. Wojick had 10 kills, Seamen had another team-leading 19 assists and Huser had 15 digs.

“We did not play smart as we did last night even though our intent and desire was there,” Condit said.

This loss drops the ’Hawks to 4-4 in Mid-American Conference (MAC) play. 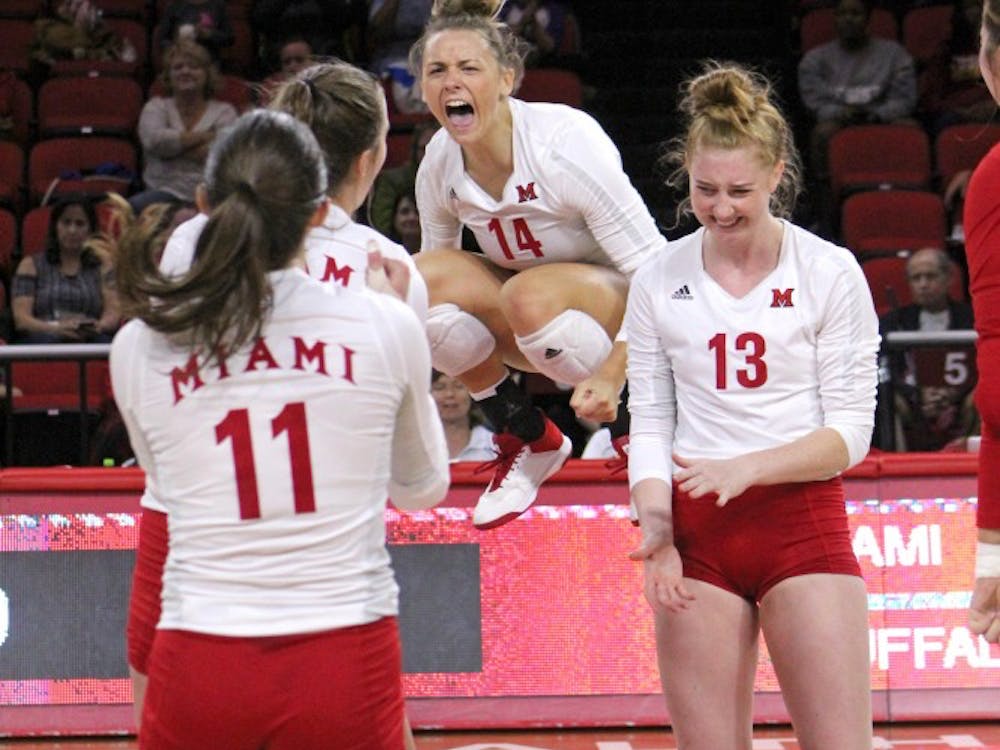 After a 3-1 start, the Miami women’s volleyball team fell to .500 after losing both contests at Bowling Green this weekend.   The team will play its next series at home against Toledo on Thursday, Feb. 11 and Friday, Feb. 12. The games will be at 4 p.m. and 1 p.m, respectively, on ESPN+.