Singing a cappella presents unique challenges to those who decide to pursue it. They must sing without any musical accompaniment, substituting their voices for instruments, everyone singing a different part.

On top of this, a cappella groups now face the challenge of not being allowed to hold any performances or practices in person due to COVID-19.

Miami Misfitz, one of Miami’s all-female a cappella groups, has adapted to this change by switching their focus from performances to recording an album. Previously, Miami’s Associated Student Government did not allow student organizations to use their funding for album recording, but they changed that this year since there can’t be any concerts.

Misfitz music director junior Grace Callahan actually put the group in contact with a recording company called Voices Only through which they could record remotely.

The group voted on four songs that they would record in the next weeks and will decide on four more next semester for the album to be released in the late spring or summer.

The biggest change Misfitz had to make was having rehearsal through Zoom, which senior and president Grace Carlos says presented unique challenges for a singing group. Rather than working on singing together, the group members have had to focus more on their specific part.

“When you’re singing with the whole group, it’s easier to get into it ’cause you hear the whole piece coming together,” she said. “But since we’ve been focusing on our individual parts, it brought a lot of detail work to our attention … I feel like I know my part better than I usually do.”

They have to focus on their own parts more rather than the sound as a whole because they can’t sing together over Zoom. Instead, they split into breakout rooms where they each take turns singing their parts for each other. They also sing individually for Callahan, who gives them feedback.

Just Duet, Miami’s only co-ed a cappella group, also struggles with not being able to sing together but is making do, said treasurer Emmett Knee.

Just Duet has changed their focus from performances to making videos to post on their YouTube and social media accounts. Each member takes a video of them singing their part and then an audio visual engineer puts them all together in a montage.

They still held auditions this year, although they looked a little different. To make it easier for potential members, they created a website that provided a description of each a cappella group and instructions on how to audition.

Misfitz had people email a video of themselves singing and Just Duet utilized a Google Form for the same purpose. Just Duet ended up having about 60 people audition. After looking through the videos, both groups held live callbacks on Zoom, and then they chose their new members.

Although the audition process went well, the groups have had trouble integrating their new members into the group because they can’t meet in person.

“When I first got into the group last fall semester … the best part was getting to meet people in the other groups and go to these big gatherings with everyone,” Knee said. “It got me acclimated to the culture of the a cappella community here.”

To get to know the new members as much as possible, Misfitz opted for informal Zoom socials and Just Duet often meets in smaller groups (with not all the members present) to have that bonding.

Even though the group isn’t able to meet in person, first-year Meredith Aliff feels welcomed in Misfitz. She particularly valued how much effort the other group members put into announcing her acceptance into the group.

After sending in her initial audition, Aliff was invited to a callback over Zoom. About a week after her callback, she got a message asking if she would do another one. All the group members were there, and Aliff was told they would ask her a few questions before she sang again.

It turned out they only wanted to ask her one question when all the group members shouted, “Do you want to be Misfit?”

“I felt so loved by these people that I’d never even met, and even though it was virtual and I knew that I wasn’t going to meet them until at least the middle of September, it was just so special to feel so welcomed by them,” Aliff said. “They all took time out of their day to get on the call and celebrate me and my acceptance into the group.” 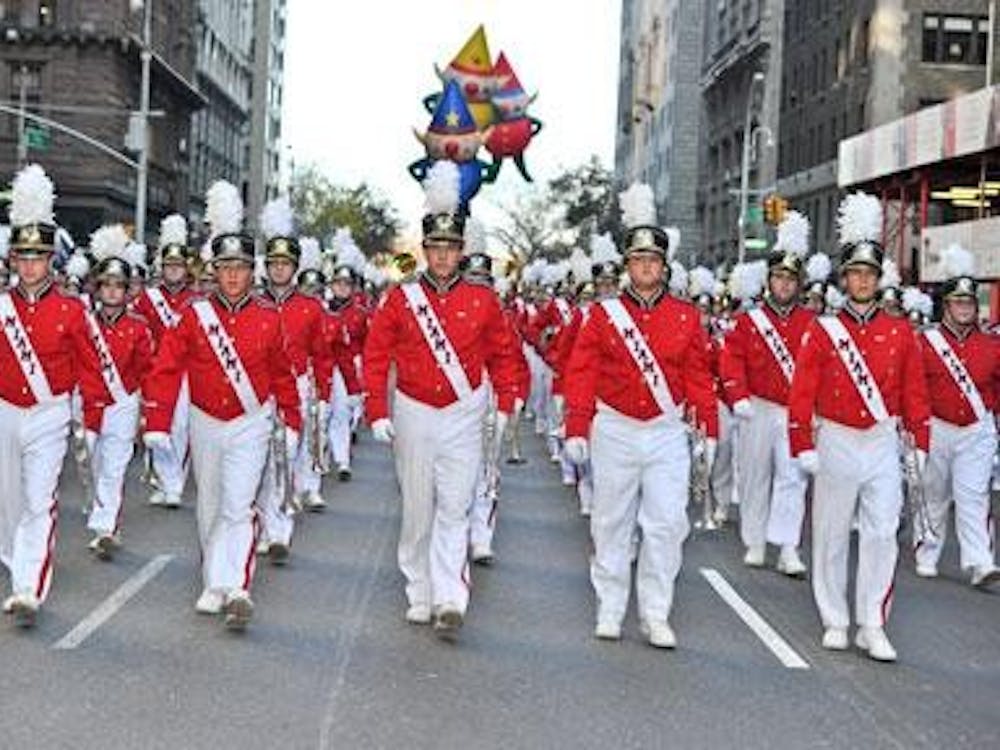 The week before classes start each fall, around 250 students dot the football field at Yager Stadium, each on a specific mark. Practicing morning to night, they create a wall of sound that fills campus. Once school starts, they are the life of football games and beacons of school spirit.  This year, the stadium is silent.

Last March, musical theatre group Stage Left and improv comedy group Sketched Out accidentally scheduled their performances in the same room at the same time. The groups were able to work it out, but the incident showed how different performing arts groups were disconnected from one another.